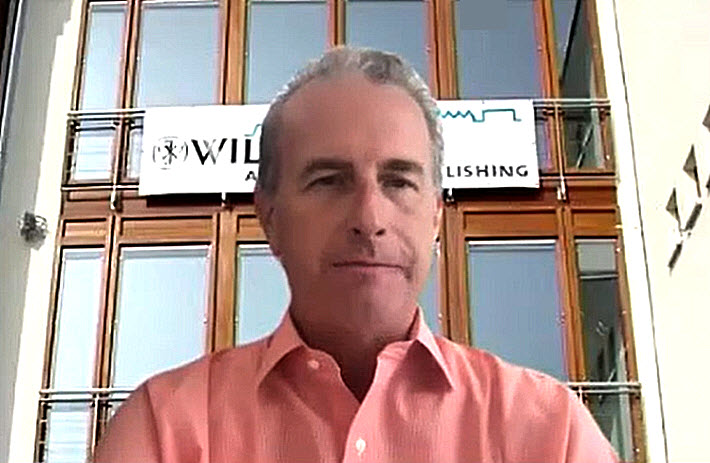 In that round table session—which you can review at Frankfurt’s digital trade show site—Flynn joined Elsevier’s Michiel Kolman and Springer Nature’s Steven Inchcoombe in a thoughtful discussion among international academic and scholarly publishing leaders about open access developments, transformative agreements, sustainability and more.

And with today’s news (January 5) of Wiley’s US$298 million acquisition of the UK-based scientific research publisher Hindawi Limited, the company is demonstrating something that Flynn mentioned in his Frankfurt comments.

In terms of “how we embrace the transition to open access,” he said, “it’s crucial that folks understand the infrastructure investments we’re going to make to deliver on the promise of open access.”

This resonates, obviously, today as Wiley announces its major new heft in peer-reviewed scientific, technical, and medical journals. Hindawi’s operation—which is to remain under Hindawi CEO Paul Peters’ direction as part of Wiley’s research business—arrives with projections from its fiscal year ending last week on December 31 of$40 million in revenue and year-over-year growth of 50 percent.

In its media messaging about the acquisition today, Wiley describes Hindawi as “playing a critical role in advancing gold open access, an open access model in which validated articles are made immediately available for reading and re-use following the payment of a publication fee.”

And having heard Flynn speak in October about the fact that roughly half the world’s academic and scholarly articles were moving on Wiley’s platforms, we’re glad to have had a chance overnight to be in touch with Flynn again for his exclusive comments to us on today’s news.

‘An Acceleration of Our Strategy’

We start by asking Flynn about what sort of impact, what kind of change, the Hindawi acquisition will have on Wiley and its offerings in the open access space. In his response, he goes right to the creative talent behind the industry.

“Researchers are at the center of everything we do at Wiley,” Flynn says. “Our mission is to help them succeed. When you look at this acquisition, we view it as an acceleration of our strategy in open access (OA) research.

“Wiley and Hindawi both share this commitment to help researchers achieve their career goals and contribute to a vibrant knowledge ecosystem. With Hindawi onboard, Wiley adds more than 200 peer-reviewed scientific journals to our portfolio, effectively doubling our open access list, and on top of that, we add about 25,000 open access articles to our publishing output.

“Hindawi has played a critical role,” Flynn says, “in advancing open access and since 2016, and has been a trusted partner for Wiley in growing our own open access business. The combined power of the Wiley and Hindawi open access journals portfolio provides researchers more options to publish in the right journal.”

In its news statements, one of the points about the acquisition that Wiley has mentioned is Hindawi’s capability to enhance Wiley’s growth in the international research industry in China. That leads us to ask Flynn to fill out that element of the deal for us.

“Over the years, Wiley has developed many collaborations and partnerships with Chinese research institutes and government stakeholders.”Jay Flynn, Wiley

“China is a global research and development powerhouse and has surpassed the United States in terms of total research output in the last few years. And yes, Hindawi’s journals match up very well with areas of strength for Chinese R&D. To underscore this, more than 65 percent of the authors in Hindawi’s journals live and work in China.”

Just as he stressed partnerships’ importance in his Frankfurt appearance, Flynn says he looks to the same concept in how increased traction is built in the Chinese market.

“Wiley really believes that partnership is the way forward for our industry,” he says, “and over the years, Wiley has developed many collaborations and partnerships with Chinese research institutes and government stakeholders.

“If you look at Wiley’s recently announced partnership with the Chinese Medical Association—where we’re bringing technology by way of our Atypon business together with publishing experience via our journals business—you get a sense of how this all might resonate with Chinese partners.”

‘The Impact of Research Globally’

And there’s always that “why now?” question to an announcement of this kind, something that comes up especially in an era of a worldwide pandemic–which, as Flynn, Kolman, and Inchcoombe pointed out at Frankfurt, has meant a new level of prominence for–and interest in–research.

“For Wiley, this was a decision made easier by the fact that we’ve been partnering with Hindawi for several years already, co-publishing a number of open access journals.”Jay Flynn, Wiley

The Hindawi Publishing Corporation was founded in 1997 in Cairo by Ahmed Hindawi and his wife Nagwa Abdel-Mattaleb, followed by the 2013 establishment of Hindawi Limited in London in 2013. What is it, we asked Flynn, that make the time right for Wiley to take on Hindawi?

“Great question,” Flynn says. “Obviously, the primary timing on this was driven by the sellers, but for Wiley, this was a decision made easier by the fact that we’ve been partnering with Hindawi for several years already, co-publishing a number of open access journals with them. We know the business and the people extremely well.

“At the end of the day,” he says, “we believe that the trends point our industry toward a more open future, where gold open access, preprints, and transparency of data, methods and peer review will continue to grow in importance and amplify the impact of research globally.

Because of all of this,” Flynn says, “our open access strategy has been gaining speed and traction specifically in the last few years, when we’ve made tremendous progress by working with funders and universities to help drive this change.

“So, the way we see it,” he says, “this acquisition is another example of Wiley’s commitment to open access and to an open science future, especially, as you mention, in the COVID-19 era.

“Together with Hindawi,” Jay Flynn says, “Wiley is proud to continue our commitment to drive the global research community forward by investing and innovating in research publishing, especially as we celebrate our 10th year in open access publishing in 2021.