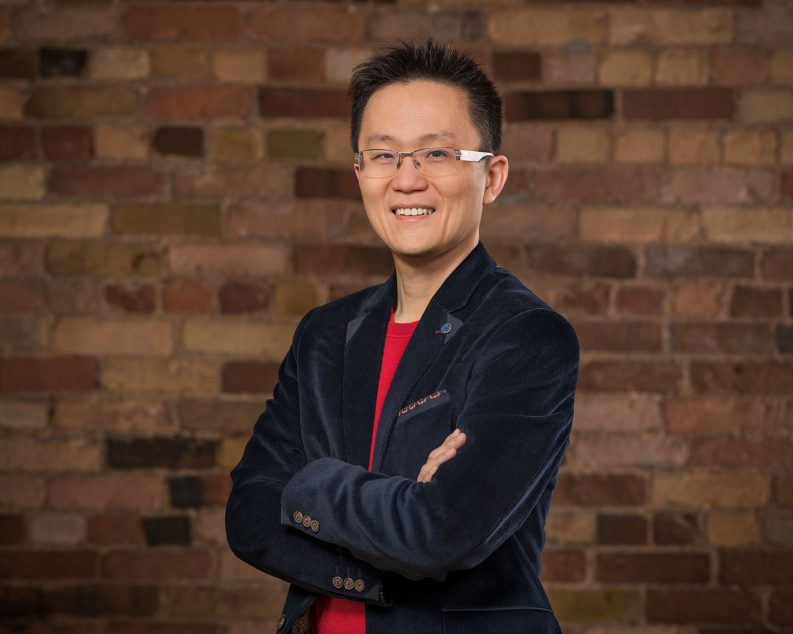 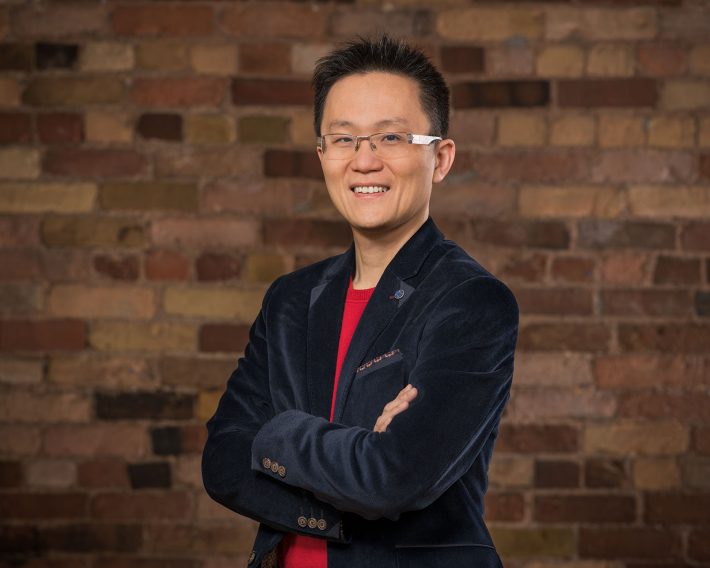 ‘It’s a Match Made in Heaven’

Allen Lau, the co-founding CEO of Wattpad in Toronto, all but leaps into a conversation with an interviewer, brimming with excitement about the acquisition of his company by South Korea’s Naver.

“It’s a great milestone, and a match made in heaven,” he says, “because it’s got the right ingredients on so many fronts.”

As Publishing Perspectives announced on Tuesday evening (January 19), Naver is acquiring Wattpad in a stock and cash deal valued at US$600 million.

In essence, Lau describes two main elements of logic in the merger.

One is a quick and enormous increase in user base through the combined numbers of Wattpad’s and Naver’s followers. The other rationale is about increasing the number of platforms—call them channels, formats, multiple media, ways of telling stories—for the content being produced by both corporations for those users.

To get the context of his rationale, it helps to take in the phrase with which Wattpad’s team has been describing itself for several years, a “global multi-platform entertainment company.” If your view of Wattpad has remained something about young storytellers churning out their weekly serial tales for large numbers of peers to read and chat about, you’re seeing only a part of it.

Granted, those writers and readers are the engine of the Wattpad dynamic. They’ve created and accessed more than 1 billion uploaded writings in more than 50 languages, spending more than 23 billion minutes per month on the platform. But they’re also are known to watch and pay for films and television series made from their favorite content, and to buy books published from the platform both by major publishing houses and by the company’s own Wattpad Books.

As the roughly 1,500 Wattpad stories so far published as books and/or adapted for television and film attest, a part of the power of the Wattpad brand has become the loyalty of that audience to its stories. A ready fan base follows each piece of content from platform to platform. And that’s what Lau sees booming as his and Naver’s operations come together. 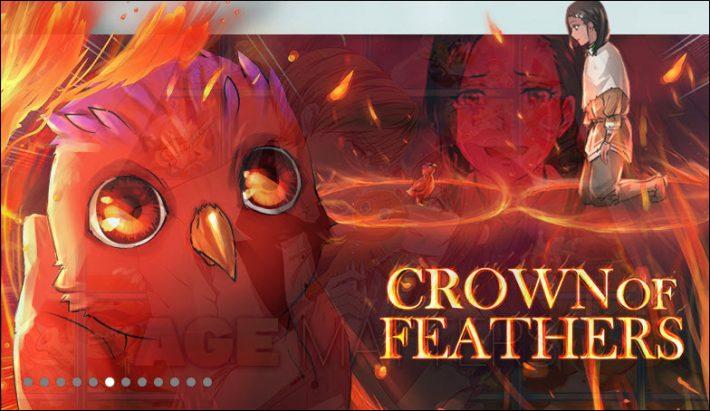 If you have much familiarity with the look and feel of a visit to a Wattpad story page, you’ll be at home on Webtoon’s site.

Have a look, for example, at Crown of Feathers by Nicki Pau Preto with illustrations by Foxkirin and the assistance of Itsuryuu. There’s an easily accessible list of 19 episodes, presented newest first. A new episode comes each Wednesday. Foxkirin’s luminous artwork draws in users with wide-eyed characters’ faces peering from the darkness in this fantasy about “a world ruled by fierce warrior queens.”

The key shot on this page is actually not one of these finely drawn illustrations but a number on that page, upper right–just like the number you’ll find on a story page at Wattpad: Crown of Feathers has had 296,100 reads, at this writing.

What that says to developers of content–just as it says to producers and publishers looking at Wattpad content–is that there’s a 20-week avid and growing audience for this property, likely to support and buy various iterations of the tale across platforms and international borders. When stories go big on these platforms, their fans number in the millions.

As Lau says in his conversation with us, “The two companies are extremely similar and yet very complementary.” 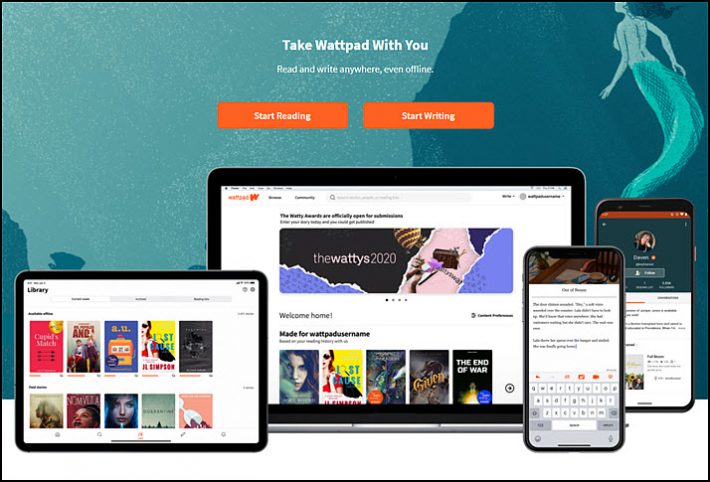 “What the merger does is supercharge us,” Lau says. “We can grow even faster with massive resources from Naver, and we can take this business to the next level.

“The opportunity, both from the reach perspective and from the monetization perspective, is on the upside.”Allen Lau, Wattpad

Naver’s subsidiary Webtoon “is the leading company in digital comics,” Lau says, sourcing local content in Southeast Asia including Japan and in the United States. “They also have Webtoon Studios,” Lau says, “which turns some of the comics into animation.

“And we are a leading social storytelling company with 90 million users and” with Naver’s 72 million users, “the combined audience will overnight increase to 160 million monthly users. That’s a lot of people.”

Lau talks of “audio, movies, television, and now this entertainment ecosystem also contains comics and animation. Just imagine one intellectual property, a story on our platform—the content IP. There are so many ways we can capture the value of that IP. Not just in text anymore but also in the form of print books, in the form of movies, in the form of comics, in the form of TV shows. You name it, we can cover it, and it’s going to be a whole lot more. 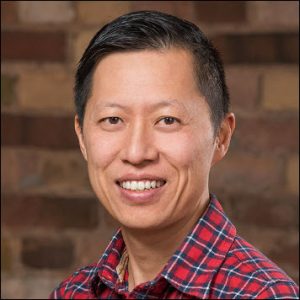 “I think the synergy is very obvious. At the same time, it’s also been very clear from Naver, and we agree, that we should operate as independently as possible” with Lau and Yuen and their team continuing, intact, in Toronto. “We’ve been doing really well. And if it’s working, you keep going.

“And then we’ll find ways to create synergy with our broader ecosystem and broader audience.”

Lau is quite cautious at this point, gently declining to speculate on how various aspects of the two companies will eventually evolve. He steps around questions, for example, of whether Webtoon Studios and Wattpad Studios, led since its creation in 2016 by Aron Levitz, will become a single entity or remain separate in their operations and output.

The discovery ahead, however, seems to be part of the charm, as he contemplates the possibility of a large comics-loyal audience being wooed to the wider content of Wattpad, and of Wattpad users and publishing and entertainment partners being introduced, in turn, to digital comics properties.

“I think the synergy is very obvious. At the same time, it’s also been very clear from Naver, and we agree, that we should operate as independently as possible.”Allen Lau, Wattpad

Regular industry analysts will note that there could be an interesting cross-draw between Webtoon’s fans of comics–a base frequently seen as primarily male–and Wattpad’s most faithful users, who are perennially predominantly female.

“The opportunity, both from the reach perspective and from the monetization perspective, is on the upside,” Lau says. He adds a shout-out to the authors of Wattpad content, noting that he anticipates the merger creating new potential avenues of revenue for them.

Naver stepped in as last year’s global sponsor of Wattpad’s annual Wattys Awards program, Lau confirms, saying, “We know the company pretty well already,” and in conversation with them, he says, a match of corporate missions became evident.

“Wattpad’s mission,” Lau says, “has always been to connect the world through stories, building the foundations of community, not just the content. And we quickly discovered this is a shared vision. In strategies and in tactics, the two companies are extremely similar and yet very complementary.

“The abilities they have, we don’t have,” he says, “and vice-versa.