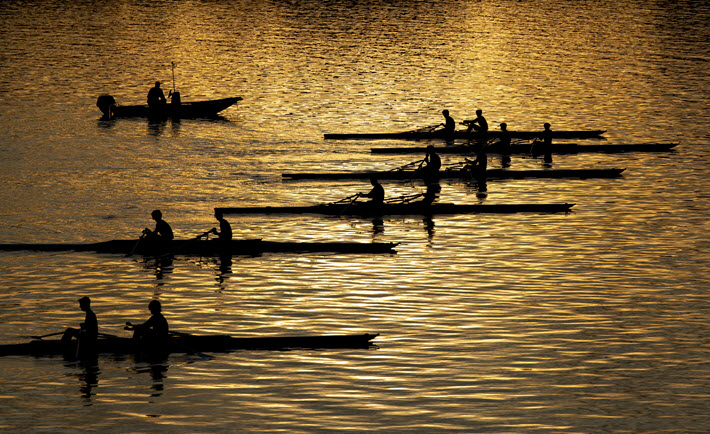 An unusual dip for downloaded audiobooks plays into the November 2020 StatShot book sales figures from the Association of American Publishers.

On the Potomac River in Washington, DC, sculling during an unusually warm spell in November. This shot was made on November 5. Image – iStockphoto: Mike Stevens

An interesting confirmation arrives today (January 25) from the Association of American Publishers (AAP) of the strength of the holiday season for the book industry in the United States.

As we’ve reported from NPD Book analysis, print book sales tracked for the year by NPD BookScan rose 8.2 percent in 2020 despite—and in some ways because of—the coronavirus COVID-19 pandemic.

Year-Over-Year: All Categories Up 24.5 Percent 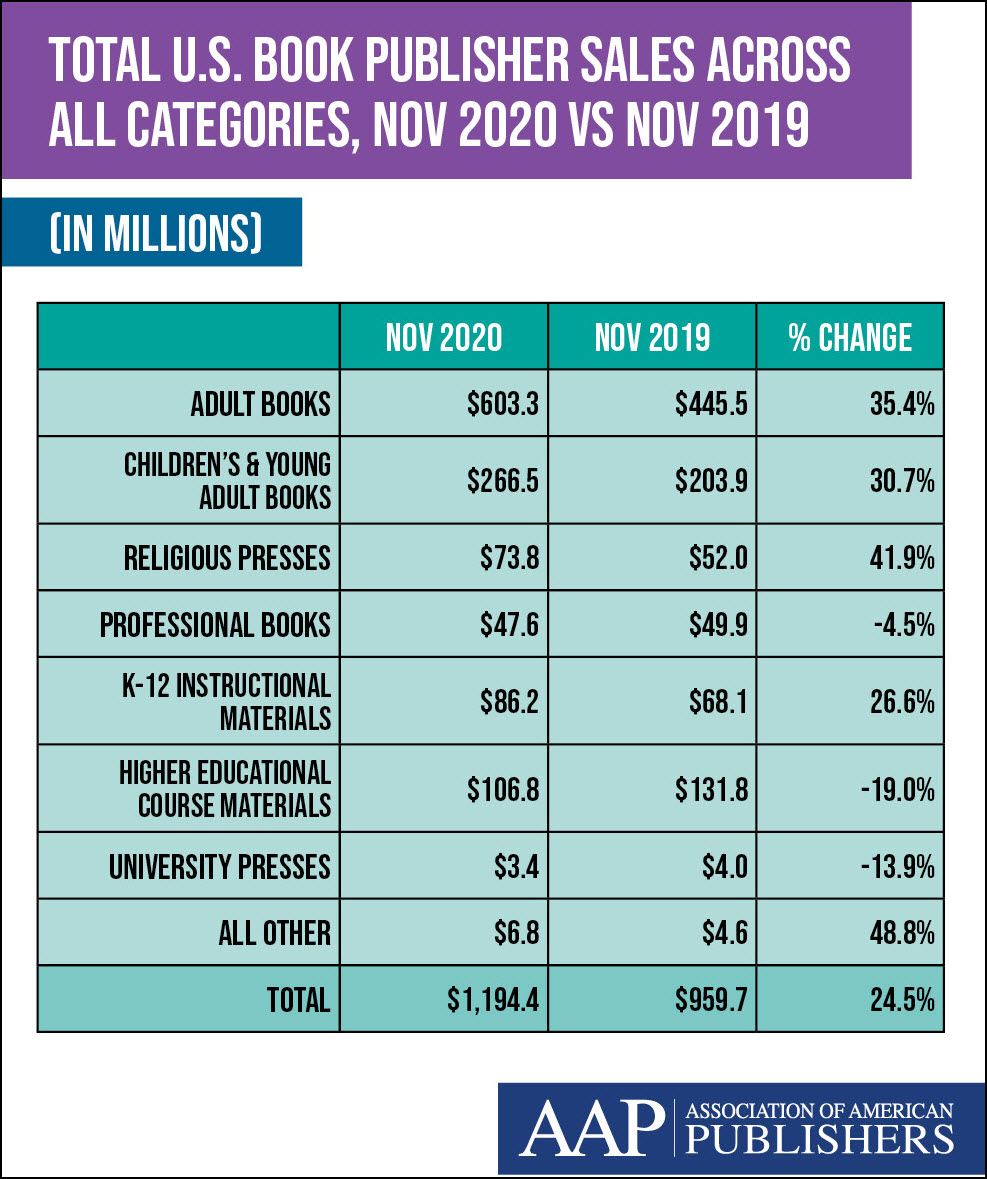 As seen above, total revenues across all categories for November 2020 were up 24.5 percent as compared to November 2019, coming in at US$1.2 billion.

That eye-catching adult books jump of 35.4 percent year-over-year is of course driven by the release in November of A Promised Land by Barack Obama from Penguin Random House’s Crown Publishing.

Publishers Lunch’s Michael Cader, in his analysis today of these figures, also points to the previous November having been “a dismal outlier, so this year’s gain was more of a return to the norm, with sales running a little below the strong $883 million from November 2018.”

Year to Date: Trade Up 9.7 Percent 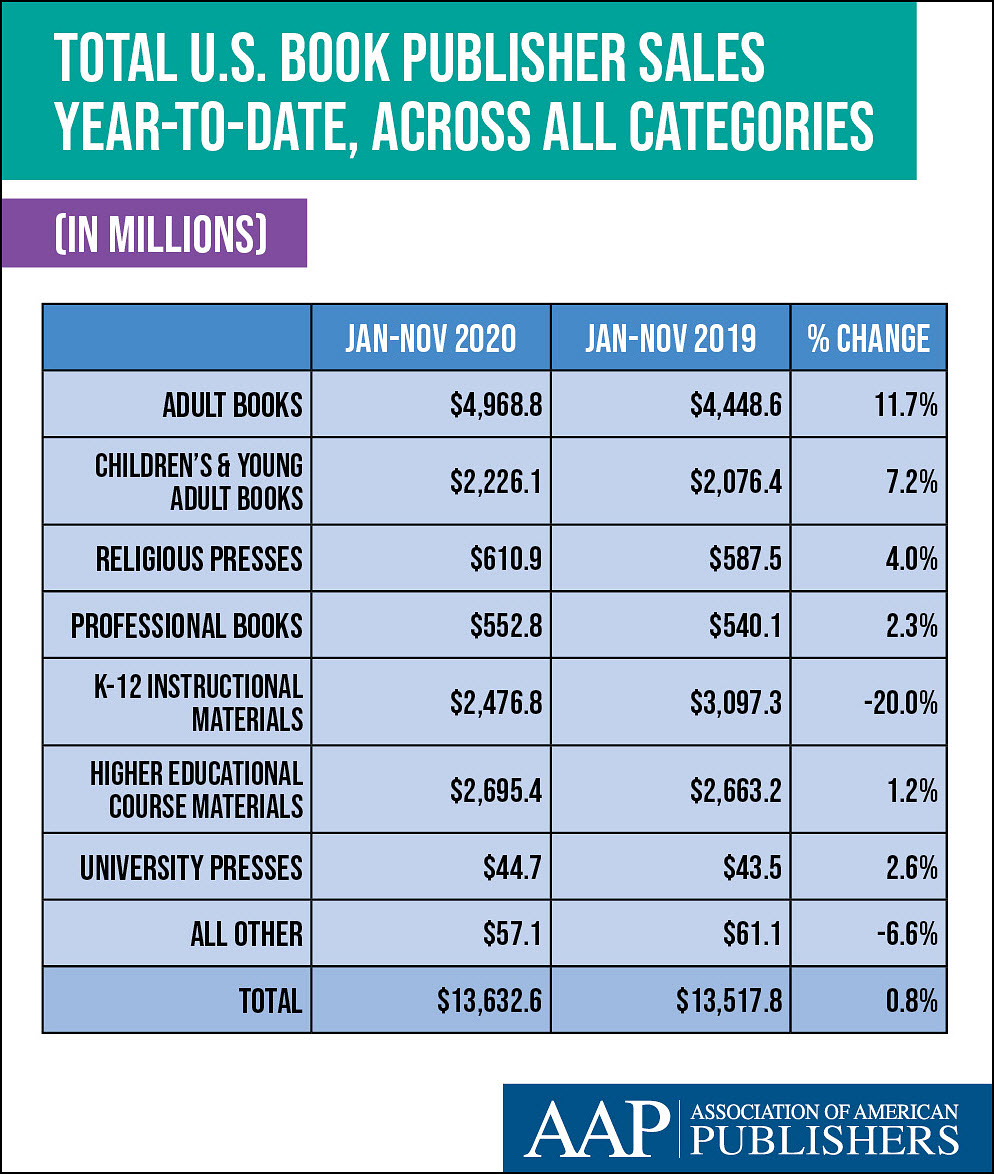 By contrast, year-to-date sales in all categories, above, were flat with an increase of 0.8 percent as compared to the first eleven months of 2019, a total of $13.6 billion.

In trade sales, year-to-date (January to November 2020), StatShot reporting showed a rise of 9.7 percent  as compared to the same period last year, coming in at $7.8 billion. 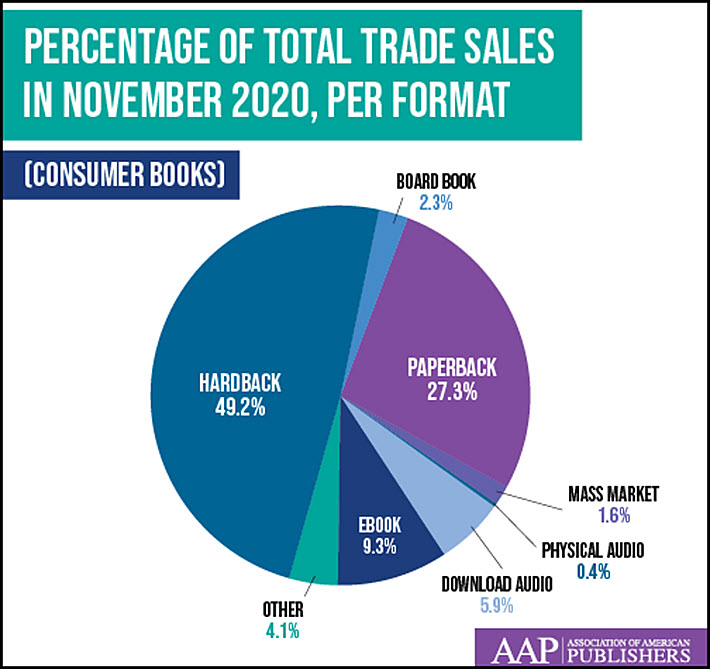 The downloaded audio format broke its long-standing trend of continuous growth every month since 2012, with a decline of 1.6 percent for November, coming in at $56.0 million in revenue. Physical audio, however, jumped 30.0 percent, coming in at $4.1 million.

That may seem counterintuitive, as digital audio is well understood to have given audiobooks the new life they’ve enjoyed for years. But as Jim Milliot at Publishers Weekly points out, holiday shopping ran early this year—something urged by retailers because of the complications of the coronavirus COVID-19 pandemic—and a physical format, such as a compact disc, works far better as a gift under the tree than an “invisible” download.

In physical paper format revenues during the month of November, in the trade, the StatShot discussion tells us:

On a year-to-date basis:

Religious press revenues were up 41.9 percent in November, coming in at $73.8 million. The category was up 4.0 percent, with revenues of $610.9 million for the first 11 months of the year.

Professional books—including business, medical, law, technical and scientific—were down 4.5 percent during the month, coming in at $47.6 million. The category was up 2.3 percent for the first 11 months of the year, with $552.8 million in revenue.