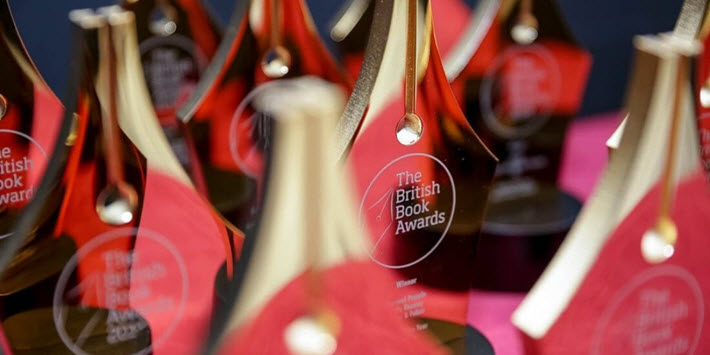 Even the awards win awards in the UK, as the British Book Awards is named Event of the Year at the 2020 Independent Publisher Awards.

As the British Book Awards open their submissions period for the 2021 prize cycle, the program is adding two categories.

This brings the total number of categories to 28, according to today’s (December 11) announcement.

While that may seem like a lot of categories, the venerable Nibbies, produced by The Bookseller in London, actually have competition. The fine PROSE Awards in the United States, presented by the Association of American Publishers, this year produced a longlist of 157 works in 49 categories. (The call for entries for the 2021 PROSE Awards closed on November 13. Jurors for this new cycle are here.)

So the Nibbies still have room to grow, and the deadline to make submissions is February 5.

There’s also a talk of a summer party—”if we can”—at which shortlistees and winners could be applauded after the accolades are digitally delivered in May, but no date or place has been announced today for that event.

With “V-Day” for vaccinations having arrived this week in the UK, Reuters’ Alistair Smout notes, of course, that the Pfizer/BioNTech vaccine’s still very young deployment has included at least two concerning reactions. Those events are being investigated, and The Bookseller is expected to announce further information about its summer party as conditions become clearer over time.

You can see the Nibbies’ full list of 2021 categories here.

As you’ll recall, this program divides its honors into two great camps.

The Nibbies’ digital rendition is embedded here for you to see, in two parts. You’ll find the second part at the end of this article.

As you may recall, the late-June digital British Book Awards program was handsomely crafted with a level of technical grace surpassed—in the many programs Publishing Perspectives covered—only by the Booker Prize for Fiction’s event, which was produced by the BBC, and that’s a network that does know something about video.

Organizers of the British Book Awards are rightly proud that the Professional Publishers Association has just honored them with the Event of the Year win in the Independent Publishers Awards. The programming, the jurors said, was “commercially successful” in its format and showed a “clever use of social media” as part of the presentation, which involved break time for interaction.

In a prepared statement for today’s media messaging, Bookseller editor Philip Jones is quoted, saying, “In a year dominated by COVID-19, social distancing rules, and lockdowns, the 2021 British Book Awards will surely showcase the trade’s incredible resilience in the face of the biggest disruption seen since the Second World War.

“The 2020 awards show was a triumph, and the intention is to build on this for 2021 with an even bigger and better virtual event followed, if we can, by a summer party.”

And there are numbers to back up the team’s pride. The British Book Awards programming has logged more than 40,000 views alongside two million impressions on Nibbies-related social media messaging.

This year’s Book of the Year, Queenie, reportedly sold 7,811 copies after its win, 68-percent jump week-over-week, while the fiction winner Girl Woman Other by Bernardine Evaristo hit its highest weekly sale to date of 21,625 copies, twice the previous week’s volume.

In 2021, Jones will chair the jurors again, with Alice O’Keeffe chairing the book awards. Benedicte Page will chair the trade categories with Tom Tivnan.

The Bookseller bought and revived the British Book Awards, which had been founded in 1990, and have produced them since 2017.

More on the British Book Awards is here. More from us on publishing and book awards in general is here. And more on the coronavirus COVID-19 pandemic and its impact on international book publishing is here.