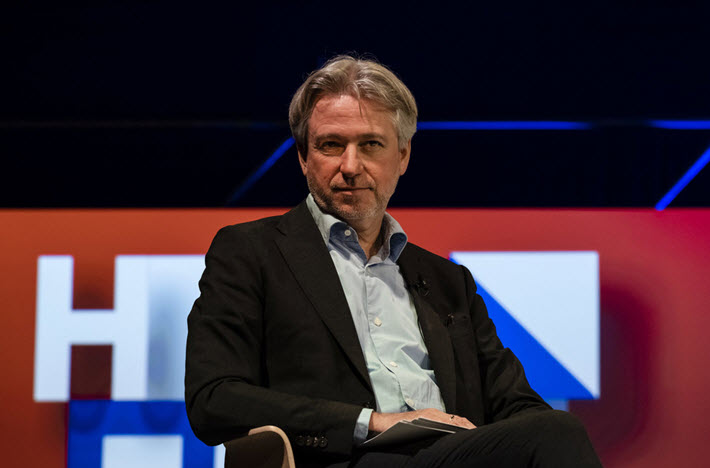 ‘I think people will be more determined to be back at Frankfurter Buchmesse in 2021,’ Juergen Boos says. ‘This has been a year like no other.’

On Wednesday, you’ll recall, the all-clear was sounded by Frankfurter Buchmesse, indicating that is streamlining and restructuring work had ended, and that the focus now shifts to putting together the strongest work possible for 2021—a year we all hope will be one of recovery, relief, and recommitment in so many aspects of life and work.

As anyone who has worked in corporate management during downsizing projects knows, the process of staff reduction is wrenching for everyone, and there have been many fine gestures of compassion and “signals of hope” as this year’s digital iteration of the trade show had it, during the process.

The show has its 2021 dates set for October 20 to 24, and Guest of Honor Canada is onboard to present its full program.

With the European Union’s regulators now accelerating the time frame for their approval of the Pfizer-BioNTech vaccine, it’s hoped that early inoculations can begin in Germany before the end of the year. Worldwide, needless to say, hopes are rising that the most aggressive possible vaccination strategies can come into play to begin finally answering the coronavirus COVID-19 pandemic, although an extraordinary effort lies ahead and maximum safety precautions are needed from everyone.

In coming to the end of this extraordinary year and looking ahead to 2021, Publishing Perspectives is glad to have had a chance to be in touch with Frankfurter Buchmesse president and CEO Juergen Boos. We know from our reporting this week that plans are to be released early in the year for what’s ahead, and the going assumption is that a physical fair is, of course, the goal—a return to Messe Frankfurt.

‘People Will Be More Determined To Be Back’ 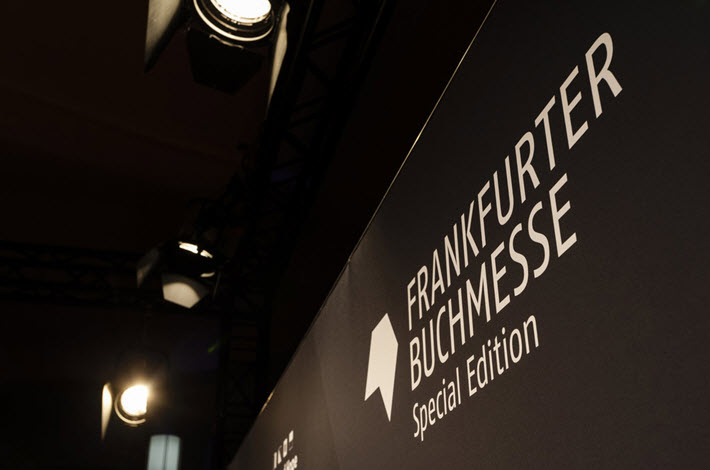 We begin our exchange by saying to Boos that the very success of the digital edition of Frankfurter Buchmesse seemed to make  “the heart grow fonder,” as the old line has it: People have told us they were move to want, more than ever, to be physically at Frankfurt Book Fair in 2021. Has he heard this, too?

Juergen Boos: You are right. During the book fair in October, we saw a huge number of comments on social media, and received many personal messages, saying exactly that—that our customers missed meeting up with their publishing colleagues and friends, and meeting new business partners.

There was a real sense that the pandemic had left a Frankfurt “hole” in their lives.

After all, what unites everyone is the desire for personal encounters and exchange. They really missed those networking opportunities that Frankfurt is best-known for, those events that take into account professional needs as well as giving space for chance encounters. Everyone thinks networking is important. It enables customers to build trust with business partners, come up with ideas, have creative conversations and talk about new titles.

So, yes, I think people will be more determined to be back in Frankfurt in 2021, but we need to acknowledge that, for most exhibitors, budgets will be very tight and international travel may continue to be challenging.

With this in mind, we will continue to expand the concept of work spaces and will develop opportunities to set up flexible presences and thus gain visibility.

We’ll also be discussing new stand concepts with our customers, including combination offers with digital support. Presence, and a meaningful presence, are as important as ever.

‘We Have All Grown Much Closer Together’ 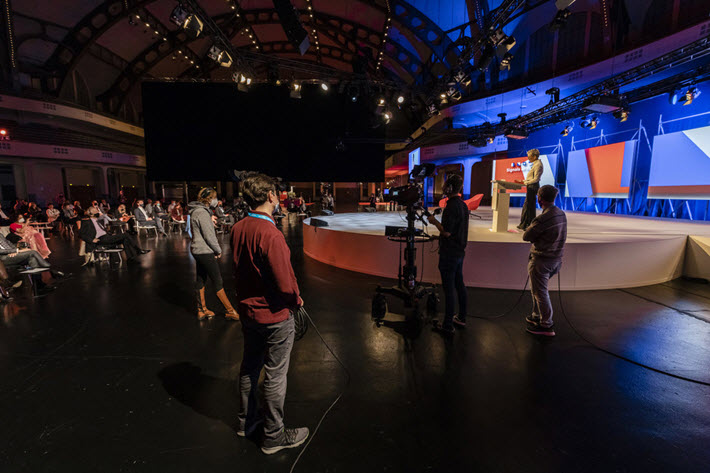 Publishing Perspectives: As we look ahead to the coming year, what have been some of the key lessons learned? What are some findings of this unique and trying year?

JB: This has been a year like no other, for all of us. It has been challenging in ways we could never have predicted. But it has also taught us many things.

We’ve learned that we need an ability to pivot quickly in response to changing situations. And it’s taught us a need for flexibility.

At Frankfurter Buchmesse we had, of course, never put on a digital edition in this way before, so we all had to learn quickly and adapt accordingly. We needed to adopt new skills and to work closer together as a team than we ever had before.

We also needed to embrace the technology available to us so that we could bring people together from all around the world. For example, we brought our activities with the German Foreign Office, with which we promote the books from Germany internationally, into the digital realm at very short notice.

Perhaps most importantly, putting on a digital book fair this year showed us that via digital channels we can reach big new audiences. We heard from publishers, and also members of the public, from countries on the other side of the globe, saying they’d never followed the activities of the book fair before. But because they were able to join in online this year, we’d introduced them to new authors, new voices they’d never have discovered otherwise.

We need to learn from this and not throw away this opportunity to connect with new audiences in the years to come.

When it comes to trade shows, exhibitors always use a sharp pencil. In the current crisis, budgets are being scrutinized with the utmost care. We are facing up to this. Exhibitors are not only concerned about the price per square meter, but also about personnel and travel costs. We’re in continuing discussions with the Hotel and Restaurant Association about reasonable overnight rates for 2021 so we can help our customers plan ahead.

As a result of the pandemic, we have all grown much closer together.

That goes for our international colleagues too, from Gothenburg to Guadalajara. Every few weeks we exchange experiences, new ideas, and what we can learn from each other digitally. This process has been both illuminating and helpful. 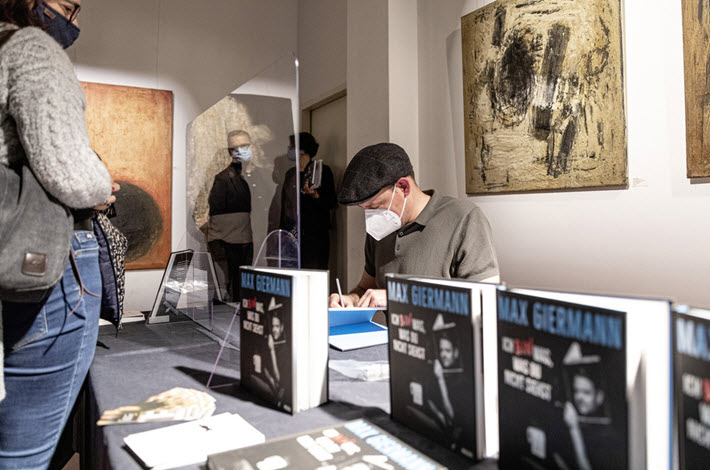 Author Max Germann signs copies of his new book, ‘I Am What You Don’t See,’ at a 2020 Frankfurter Buchmesse BookFest session at Frankfurt’s Gallus Theater. Image: FBM, Marc Jacquemin

PP: Can you review for us some of the top-line perspectives from the interviews you’ve done with some 200 exhibitors to get a fix on their needs?

JB: The publishers are very interested in us concentrating on the essentials: making physical encounters possible, providing places for discussions with business partners, offering good presentation areas through the exhibition stands, creating a symbiosis of trade and public fair. Reconnect! Reunite! These are the key requirements that publishers place on us.

On a more detailed level, the exhibitors’ responses revealed a diverse range of needs regarding the fair.

While international exhibitors would like B2B venues and an improved matchmaking tool, German exhibitors say that interactions between their authors and the public and the resulting media response are of major importance.

All exhibitors surveyed said they would like flexible presentation formats. The digital tools offered by Frankfurter Buchmesse are to be further developed next year, augmenting the physical fair. 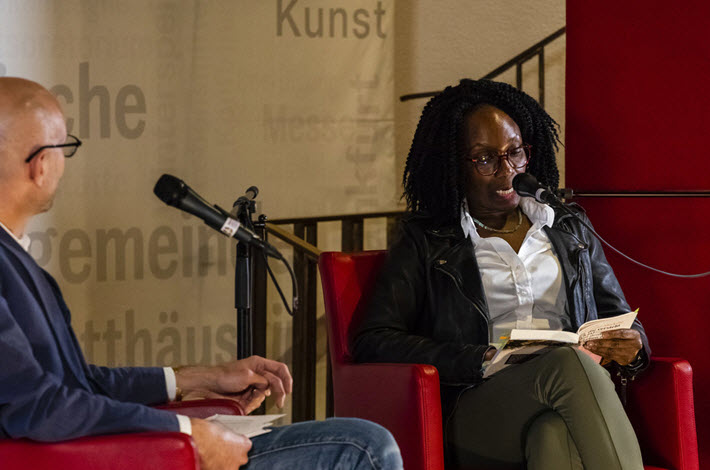 The author Florence Brokowski-Shekete reads from her new book, ‘Shit, She Understands Me! From the Life of a Black German,’ at a 2020 Frankfurter Buchmesse BookFest event at Frankfurt’s Matthaeus Kirche. Image: FBM, Marc Jacquemin

PP: While one goal of doing such a strong digital rendition of a huge trade show is simply to “keep the conversation going,” it seemed that many attendees also felt that things were furthered — issues were discussed, new tools were tried out and adopted, and alternative ways of working were explored. There appears to be a lot that people are saying they’d like to bring along with them from this, digital modes that they can have with them at a physical Frankfurter Buchmesse, yes?

JB: We can draw on our experience this October to answer this question.

What worked very well were specialist conferences, with a specific thematic focus. We were able to invite some speakers to take part in our programs this year that we would never normally be able to, because of their lack of availability. The digital edition—without requiring them to budget travel time—allowed us to do this in 2020.

In the communities, the digital tools serve their purpose. We want to keep the conference formats, but offer them as hybrid in 2021, in other words as a physical event but with digital extension through streaming.

Our cooperation with media partners also went well, and we want to continue it. It always becomes more difficult digitally, of course, when the group of participants and the spectrum of interests we want to serve is very large. 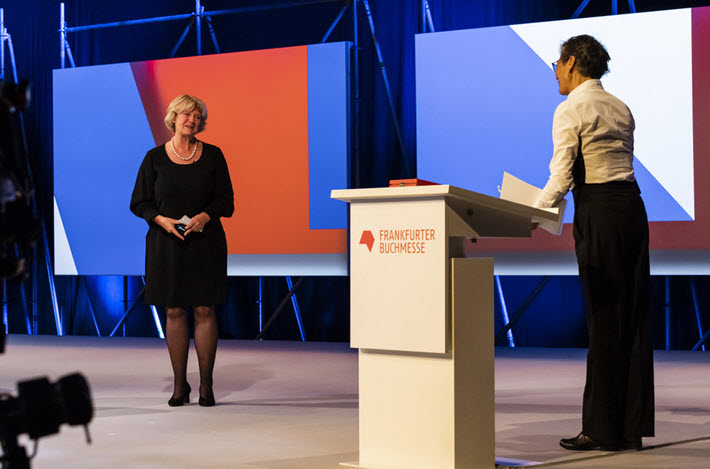 PP: Even amid the challenges Germany has faced, the kind of support for publishing and the nation’s cultural life more broadly—in the Neustart Kultur program’s grant, for example, and the culture minister Monika Grütters’ support—has seemed exemplary to many of us in other markets. From the international stage, we see the importance of this so clearly and we admire such an emphasis. Do German citizens understand, themselves, how enviable this is for many of us?

JB: We’ve been very fortunate to receive the funding this year—we do realize this.

It enabled us to deliver the Frankfurter Buchmesse Special Edition, including special features like the hugely popular BookFest. But you’re right, we should not take these things for granted and we’re very aware that other book fairs have not been given the same kind of state support that we have.

Like Leipzig, we will pass on the public funding from the State Minister for Culture and Media specifically to our smaller and medium-sized publishing customers. We consciously see this support as promoting diversity.

And for anyone who has been to Frankfurter Buchmesse in October you’ll know that the City of Frankfurt totally embraces the book fair week.

Where else in the world could you have a conversation with a taxi driver, driving in from the airport, about the big-name authors appearing at the fair that week? And it’s not just a big cultural event locally, it makes headlines across Germany too.

We do appreciate the special role that the book fair plays in the German cultural calendar, and long may that continue.