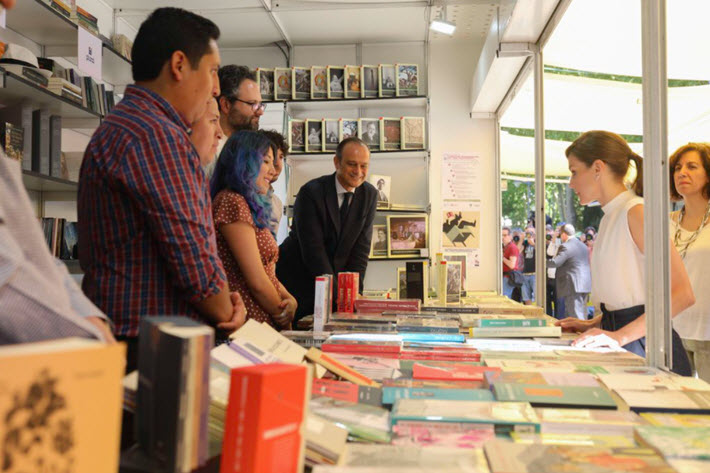 The 80th iteration of Spain’s flagship Feria del Libro de Madrid has announced dates in both June and September, attempting to get ahead of the new year’s pandemic-driven uncertainties.

A visit by Letizia Ortiz Rocasolano, queen of Spain, to bookstalls in the 2019 Feria del Libro de Madrid. Traditionally, the royal family opens the fair each year with a walkthrough of the grounds. Image: FLM

Taking ‘the Utmost Responsibility’ for Safety

As many of the biggest book fairs, festivals, and trade shows in the world enter the new year trying to gauge how the coronavirus COVID-19 pandemic will affect these signal events in world publishing, the 80th edition of the Feria del Libro Madrid is hedging its bets by staking out two sets of dates.

The program’s organizing committee has decided to set the dates as June 11 to 27, but also to hold September 10 to 26, in case the progress of inoculations and public-health directives renders the summertime dates unworkable. The fair normally is held in the early part of June.

The book fair is a member of the Aldus Network of European book fairs and in 2019, it was the largest of the Aldus events by number of visitors among the public-facing fairs, with 2.4 million attendees.

Organizers say they’ve anticipated the possibility that health conditions may yet impact controls on crowd size and more, particularly if the June dates are feasible, of course, and they insist that they’ll be guided by the prevailing science and regulations at the time.

Two major trade shows, the London Book Fair and the Bologna Children’s Book Fair, have also announced June dates, Bologna setting its sights on June 14 to 17 and London on June 29 to July 1.

‘Care for the Citizenry and Our Exhibitors’

In providing the Madrid details to Publishing Perspectives, the show’s director, Manuel Gil, stresses, “The 2021 fair will follow at all times the recommendations made to us by state, local, and community health authorities. 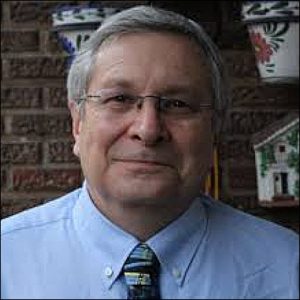 “We shall operate under the conditions they indicate with the utmost responsibility and care for the citizenry and our exhibitors.”

The show is held in the Spanish capital’s Parque de El Retiro with its Velázquez Palace and Glass Palace, both used by the Reina Sofia Museum.

In issuing its statement for its dual dates approach, the organizing committee says, “We’d like to thank all our patrons, collaborators, and the media, who at all times have supported the fair being held and echoing our commitment to the industry and the reading public.

“We’d like to offer special thanks to the City Hall and the Community of Madrid for their committed and unwavering support of the fair during such complicated times.

“And we must also give a special and fraternal thanks to Colombia, guest of honor, whose patience, understanding, and generosity have been extraordinary.”

We’ll have updated details on the 2021 development of the Feria del Libro de Madrid as news becomes available. 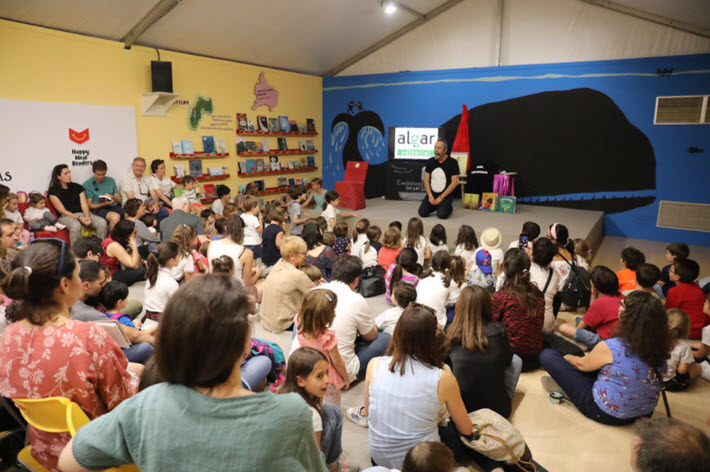 A storytelling event for children with José Carlos Andrés in the 2019 fair. Image: FLM

At this writing, the 7:22 a.m. ET (1222 GMT) update of the Johns Hopkins Coronavirus Resource Center sees 1,910,218 cases in Spain’s population of 47 million, with 50,689 fatalities. Those figures place it ninth in the world for caseload and 10th in the world for deaths.

As has been seen in many international markets, contradictory guidance and regulations have prevailed as New Year Eve approached.

McMurtry writes, “New infections have been rapidly accelerating all week and much of Spain is relaxing regional curfews and increasing the maximum number of people allowed to gather to facilitate year-end festivities, just like during Christmas.

“Yet, parts of Spain that are seeing the highest increases in cases are asking citizens to celebrate at home.”

More from Publishing Perspectives on the Spanish market is here, more on the Feria del Libro de Madrid is here, and more from us on the coronavirus COVID-19 pandemic and its impact on international book publishing is here.