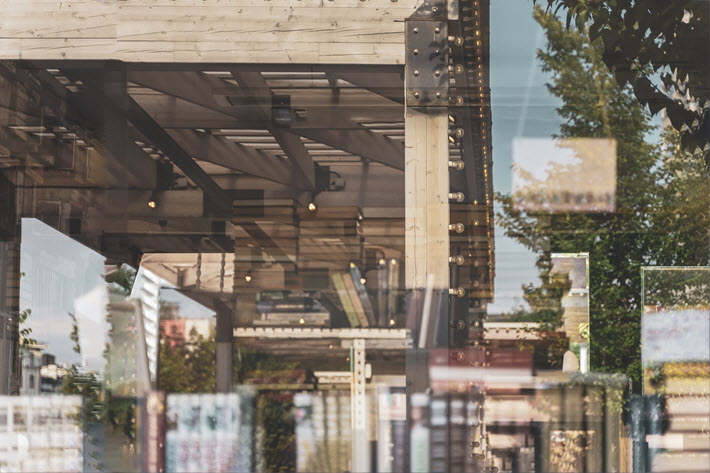 ‘Bolstered by Excitement Around the Election’

In a year that’s been a standout for political nonfiction in the United States market, the first volume (of two) of Barack Obama’s new memoir  A Promised Land from Penguin Random House sold more than 835,000 print copies in its first week, according to NPD BookScan figures on print sales.

Penguin Random House’s figure in all formats for the first week, in fact, is 1,710.443 copies in the States and Canada–setting a new record for PRH first-week sales.

Update: Penguin Random House has announced on December 17 that the book has sold 3,320,000 in all formats in Canada and the United States in its first month. As of the 17th, the book has 4.7 million copies in print in the U.S. and Canada, following an initial printing of 3.4 million copies.

As Kiera O’Brien is reporting at The Bookseller in London, similar performance is being tracked for the book on the British market.

“Barack Obama’s A Promised Land (Penguin),” O’Brien writes, “has once again charted top of both the Amazon ‘most sold’ and ‘most read’ nonfiction charts, as it claimed a third week as the UK official Top 50 No. 1” per Nielsen BookScan. 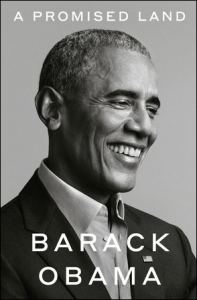 Media messaging from NPD says that the runner-up to this new success is Michelle Obama’s Becoming, also from Penguin Random House and released two years ago on November 13, 2020, which sold 711,000 copies in its first week. Becoming stands at No. 5 on the Amazon Charts in “most read” nonfiction, it’s 108th week, and at No, 4 in “most sold,” at 105 weeks on that list.

And No. 3 among these heavy-hitting White House memoirs is Bill Clinton’s My Life, again from Penguin Random House, released on May 21, 2015, and selling 606,000 copies in its first week.

At many points in the latter half of the year, the book by Donald Trump’s niece, Mary L. Trump,  Too Much and Never Enough: How My Family Created the World’s Most Dangerous Man (Simon & Schuster, July 14) has been a steady presence. That’s borne out today, with Too Much and Never Enough standing at No. 18 on the Amazon Charts’ “most read” nonfiction. 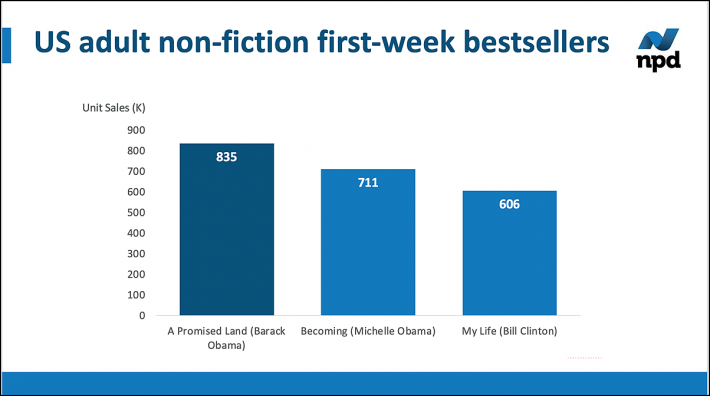 Image: The NPD Group/NPD BookScan, US print sales only

In a prepared statement, NPD Books’ Kristen McLean says, ” Nonfiction books of all kinds fared very well this year, bolstered by the excitement surrounding the presidential election and with the additional reading time afforded by pandemic mitigation orders.

“From political memoirs and nonfiction books about race to political commentary and opinion, US readers were reading books at a higher rate than usual.” 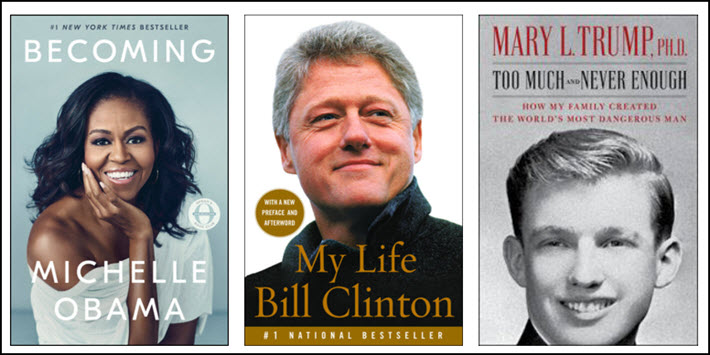 Adult nonfiction, which NPD points out is the largest US print book “super-category,” accounting for 41 percent of the total US market, rose 3.3 percent over 2019 performance on sales of more than 257 million units through November 28.

Books that specifically explored race in America, McLean’s figures show, played what she terms “a crucial role in the rise of the general no-fiction category in 2020.” These were led by:

And NPD is confirming that the fastest-growing subjects in this category were political commentary and opinion, which increased sales by 1 million units this year, and the subcategory of civil rights, which grew 629,000 units.

Top-selling political titles included How to Be an Antiracist by Ibram X. Kendi (Penguin Random House) with 669,000 units and  Live Free or Die: America (and the World) on the Brink by Sean Hannity (Simon & Schuster) at 543,000 units.

More from Publishing Perspectives on political books is here. More from us on Penguin Random House is here. More on the United States market is here and more on nonfiction is here.