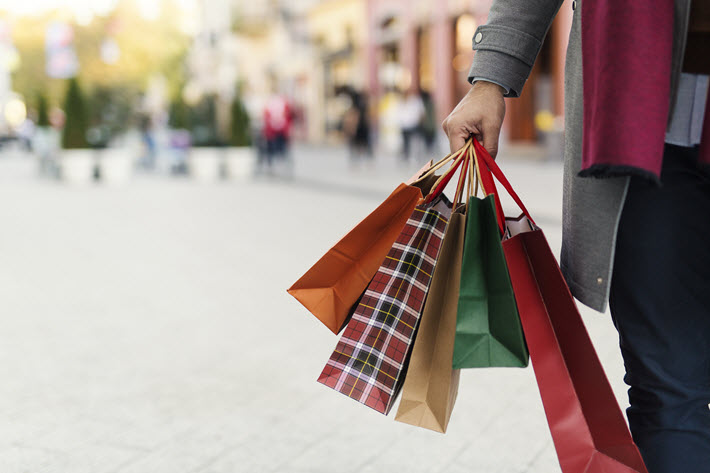 ‘After a wobble during election week,’ says NPD’s Kristen McLean, US book sales have ramped up into the holiday season in strong shape for the year’s end.

It’s been “such an intense and volatile year” in the American books market, writes NPD Books’ executive director Kristen McLean today (December 7), “that looking at the 2020 bestseller list is already like looking at a time capsule of the cultural moment.

In her report on the States’ book business’ November, McLean confirms that “after a wobble during election week, US book sales have continued its strong performance, with a ramp-up into holiday spending.

McLean’s data shows sales growing 7.7 percent year-to-date on a unit basis for the month of 622 million units and US$10.8 billion in value, calculated using the manufacturer’s suggested retail pricing.

There is something of a counterweight in Jeffrey Trachtenberg’s Wall Street Journal look from Saturday (December 5) on Barnes & Noble under its CEO James Daunt. “In recent months, Mr. Daunt has cut the ranks of once-powerful staffers who supervised large groups of stores and fired nearly half of the company’s New York-based book buyers, powerful tastemakers who decided which titles stores should carry. In the process, he has severed decades-long relationships with publishers who paid to have their books placed in stores.”

One interesting point Trachtenberg brings out is that Waterstones—the United Kingdom’s leading bookselling chain at which Daunt is managing director—the return rate is 3.5 percent, while in the Barnes & Noble system in the States, that rate is around 25 percent and with some new titles up to 50 percent.

Whatever may be the evolving state of physical bookselling in what we all hope is the waning vaccine powered “beginning of the end” of the coronavirus pandemic, McLean is pointing out today that for a year mired and often shut down in a worldwide contagion, “When we look at combined ebook and print book sales, we expect 2020 to reflect one of the highest-volume years for US trade book sales in NPD BookScan history.”

One thing McLean points to is rising hardcover sales—this can be an indication of the market having moved into holiday spending, of course.

McLean’s report indicates that in November, juvenile fiction print sales surpassed 5 million unit sales for the first time in 2020, led by media tie-ins such as Disney’s “5-Minute Stories,” as well as by comics and graphic novels, as well as holiday titles. 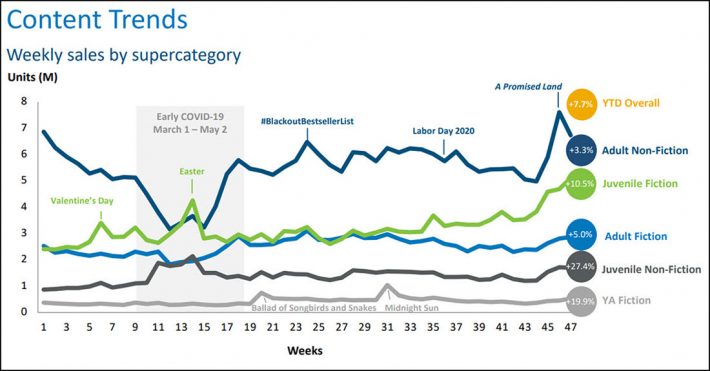 It’s no surprise, of course, that the first volume (of two) of Barack Obama’s memoir A Promised Land (Penguin Random House) is leading November’s Top 10 bestsellers in NPD’s charts. But when McLean takes a look back at 2004—”also a contentious election year,” as she points out—it’s Bill Clinton’s My Life we see at No. 6 and Dan Brown at No. 1 (The Da Vinci Code), No. 3 (Angels and Demons), No. 9 (Deception Point), and No. 10 (Digital Fortress). You almost wonder how Brown missed making a run for the White House.