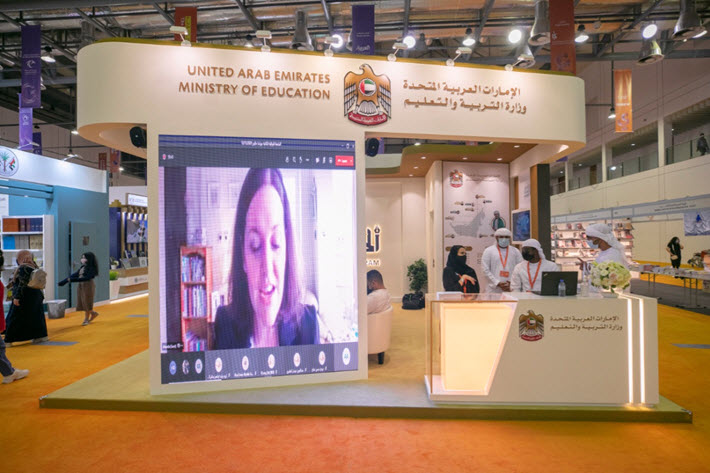 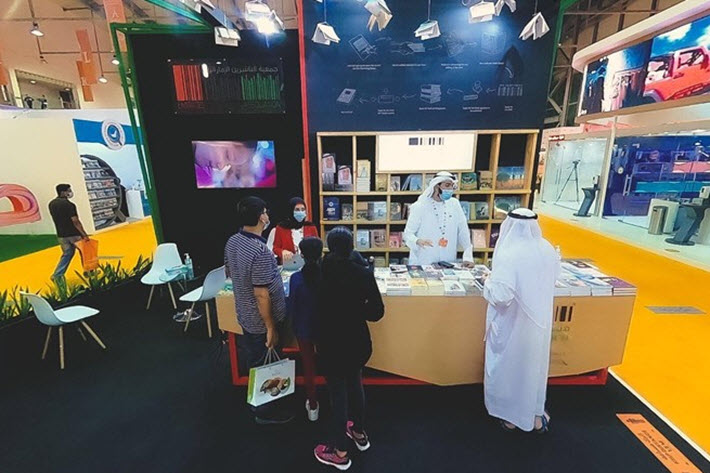 Confirming that 73 nations were represented by its 1,024 exhibitors, the program–this year themed “The World Reads From Sharjah” holds the distinction now of being the one major international book publishing event to have given its program a physical evocation since the spread of the coronavirus COVID-19 pandemic began scuttling conferences, trade shows, book fairs, festivals, and the industry’s plethora of international book and publishing awards programs in March.

Even as Sharjah announces its numbers, in fact, The Bookseller’s annual FutureBook in London is running all week as a digital-only program. Similarly, there are digital-only renditions this week of the UK’s Women Poets’ Prize winner announcement this evening (November 17); the US National Book Awards program Wednesday; the Booker Prize for Fiction ceremony; and the list goes on. Nowhere else on the publishing horizon do we see a major event planning a physical component, and this puts Sharjah into a special category pretty much all its own.

And even here, not all was physical.

In Parallel: An Online Cultural Program

A ministry display at Sharjah International Book Fair shows the online programming developed for the cultural program, engaged in digitally by more than 63,000 people during the fair’s run. Image: SIBF

The cultural program, in which Publishing Perspectives was glad to participate, was carried out on the Sharjah Book Authority‘s “Sharjah Reads” platform, drawing a reported 63,500 attendees to interviews and presentations by authors, intellectuals, poets, and politicians in interviews and conversations.

But on the physical plane, more than 100 Emirati, Arab, and international writers were at a Book Signing Corner–even as the United Arab Emirates’ ministry of education hosted online meet-ups for young readers with authors and cultural icons.

If anything, this is going to create a conversation point for Book Authority chairman Ahmed Al Ameri in June when Sharjah is the Market Focus nation at the rescheduled London Book Fair (June 29 to July 1). In answer to the “how did you do it?” questions, Al Ameri will talk about thermal scanners, five-hour overnight disinfecting efforts in the exhibition hall, reserved daypart timing for attendees (who were allowed to be there in three-hour increments during opening hours), and diligent police enforcement of full compliance with safety protocols. 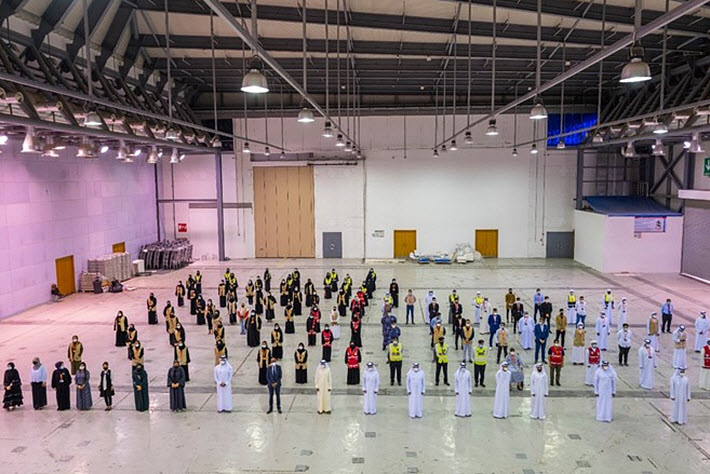 Some of the 211 volunteers now being praised by Sharjah Book Authority for serving as the eyes and ears of the organizers in enforcing safety protocols at the mask-mandatory Sharjah International Book Fair 2020. Image: SIBF

A group of 211 volunteers were included in the effort, sent in as a compliance-assurance force to work as greeters, information assistance, registration clerks, and at times hand-sellers of favorite books, all trained to be sure regulations were obeyed as four three-hour shifts played through each day. 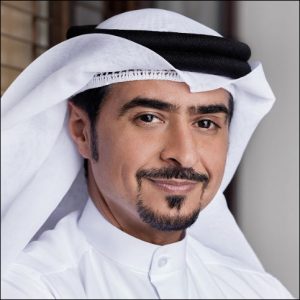 “As one chapter of Sharjah International Book Fair concludes,” Al Ameri says in a prepared statement, “a new one begins. This cultural event does not conclude when visitors leave and the Expo Centre’s doors are closed.

“We continue our efforts to design the next edition and decorate it with a brand-new cultural vision. We’re preparing for the fair’s 40th edition next year, a number that will embody four decades of knowledge and creative development.”

That 40-year run has come about thanks to the committed vision of the Sheikh Dr. Sultan Bin Mohammed Al Qasimi, whose efforts this year included creating a special fund of 10 million UAE dirhams (US$2.7 million) for the purchase of Arabic and international-language titles from the exhibiting publishers, many of whom have struggled with lost revenue amid so many other book fairs’ pandemic-driven closures.

The books bought through Sheikh Sultan’s new allocation will go into branches of the Sharjah Public Library system as well as into the government’s departmental collections and academic institutions.

As reported in our earlier coverage, that contribution to the region’s publishing health was coupled with special funding for Lebanese exhibitors and extended to Syrian and Egyptian publishers, many of whom have struggled under special challenges in this strange year. The Lebanon initiatives have been led by Bodour Al Qasimi—who is vice-president of the International Publishers Association—in her work with the Book Authority and leadership of the Sharjah World Book Capital program.

The rationale for holding this fair had to do with the fact that it is a “selling fair.” The public arrives, not just to engage in literary life but to buy books. In many parts of the international industry, not just in the Arab world, sprawling annual book fairs become the equivalent of a holiday shopping season to other markets. They are the main point of sale and the turnover they see in these settings can mean the difference in survival and closing.

With many such fairs unable to operate, publishers and authors have found much of their revenues collapsing, and a part of Sheikh Sultan’s understanding of Sharjah as a reading-based culture has meant a responsibility to reach out to the region’s literary players with support.

The Book Authority also has announced receipt of 1,014 publishers’ applications for Sharjah’s translation grant program with funding of up to US$4,000 for each selected project. Those applications will be received until February. 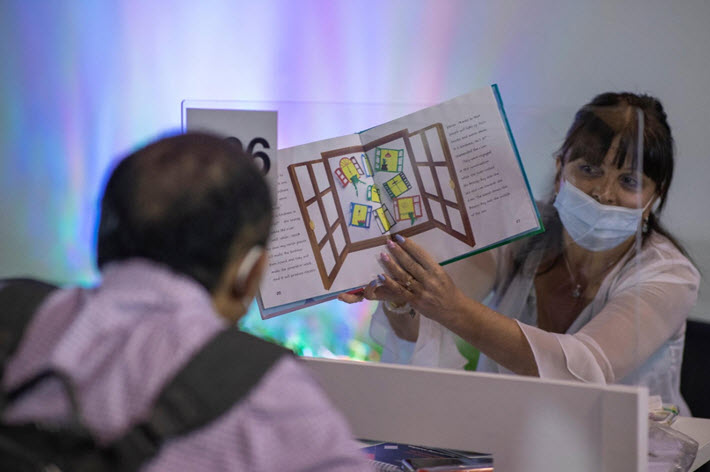 A key part of the rationale for the physical Sharjah Publishers Conference was its trading center and its participants’ chance to apply for translation funding. The conference and its trade-meeting afternoons were held this year at the Expo Centre. Image: SIBF

International diplomatic envoys paying their respects to the effort in exchanges with Al Ameri included those of France, Mexico, Sweden, Italy, Canada, India, Afghanistan, Japan, and Spain. As we also have covered, the fair’s annual Publishers Conference was given its three-day run with some 317 primarily regional players in attendance and 33 speakers operating in a live-and-digital program.

A digital evocation of the annual Sharjah International Library Conference—staged in association with the American Library Association—drew a reported 801 attendees from 51 countries, 11 of which were represented for the first time.

The Gulf News staff is reporting a total 1,255 new infections for the UAE today (November 17), with four new deaths. The ministry of health and prevention sees a higher overall toll for the country than Johns Hopkins has confirmed as yet, citing a caseload of 152,809, and the same fatality total of 538. 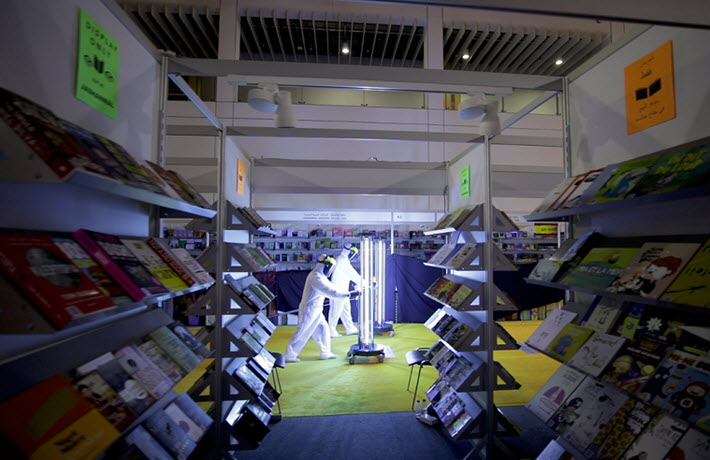