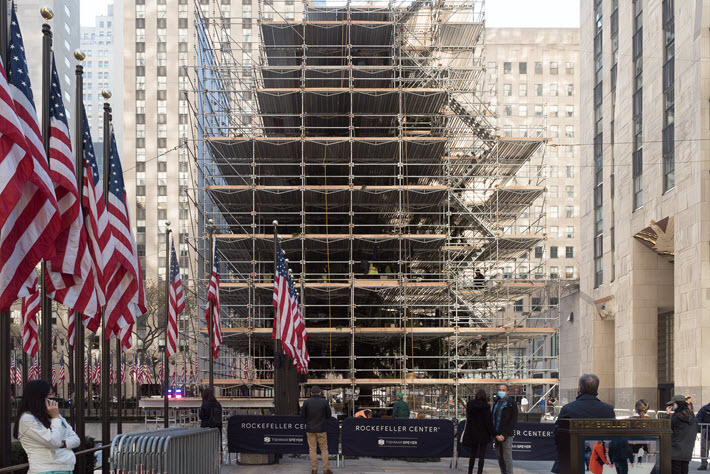 The week of November 14 kicks off holiday shopping in the US. NPD reports the highest week of book sales so far this year.

A sign of the season in Manhattan: the Rockefeller Center Christmas tree scaffolded for decorating, November 20. Image – iStockphoto: Massimo Giachetti

Just to clarify the importance of the decorative season we’re entering, the NPD Books‘ Kristen McLean is clarifying today (November 23) that the United States’ book market is dependent on the winter holiday season for 25 percent of its annual print sales.

McLean, who’s the lead books industry analyst for NPD, is bullish on the chances for the American industry to end this strange year strongly, telling the news media, “Book sales have been stronger than normal throughout the coronavirus COVID-19 pandemic, so publishers have reason to be hopeful for good holiday tidings, and a strong finish to 2020.

“Historically,” she says, “the uptick in sales begins in the first week of November, but as the country continues to deal with the COVID-19 pandemic, we are watching closely to see if we see the same book shopping patterns as in previous years.” 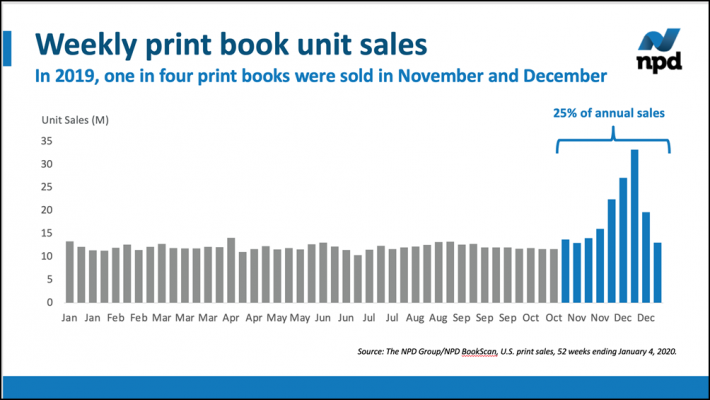 One useful tool in regard to this important season is NPD’s “2020 Holiday Intentions” consumer survey, which tells McLean that US consumers say they plan to spend an average $691 on holiday shopping this year. That’s a mild decline from last year but compares well with the survey responses of two years ago.

McLean’s colleague Marshal Cohen, NPD’s chief industry research adviser, says that this year’s caution may be mitigated by the need for some “retail therapy.”

Midway Through November: US Book Market Up 7.2 Percent

In her rolling weekly assessment, McLean reports seeing the US market rebound in the week ending November 14, from a slower week to a gain of 7.2 percent on a unit basis on the year, a rise of 6.1 percent on value, going by manufacturer’s suggested retail price (MSRP).

“We have no doubt this growth trend will continue next week and expect sales will hit another 2020 high due to president Obama’s highly anticipated A Promised Land,” she says in her media messaging today.

“With volume 20 percent higher than the same week in 2019, this week marks the highest week of unit sales for the print market so far this year. The volume of 15.5 million units signals the start of the seasonal climb.”

Highest growth in that week ending in the middle of the month was seen in in adult nonfiction—biography and cooking leading the way. Also strong was juvenile fiction with humorous stories and holiday content following.

In terms of the drop seen in the previous week, McLean points, understandably, to “election distraction.” 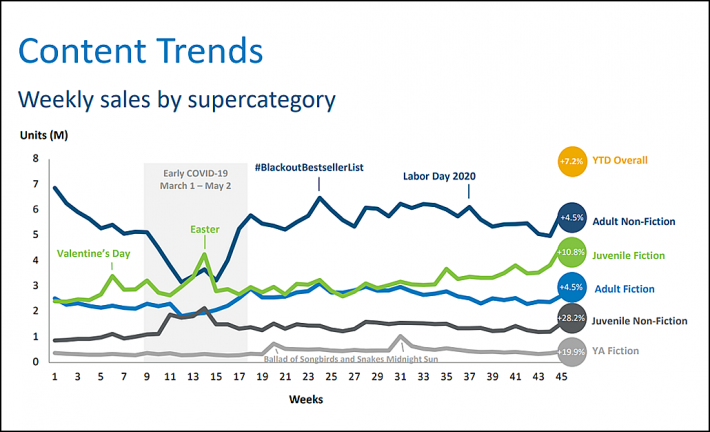 As seen above, Week 45 of 2020 sees all of NPD’s scanned super-categories growing week over week, with juvenile fiction gaining 700,000 units compared to the previous week. Christmas books topped the list.

NPD Books sees this as an indication of an earlier start to holiday shopping than in the past, something many in the retail sector have encouraged among consumers.