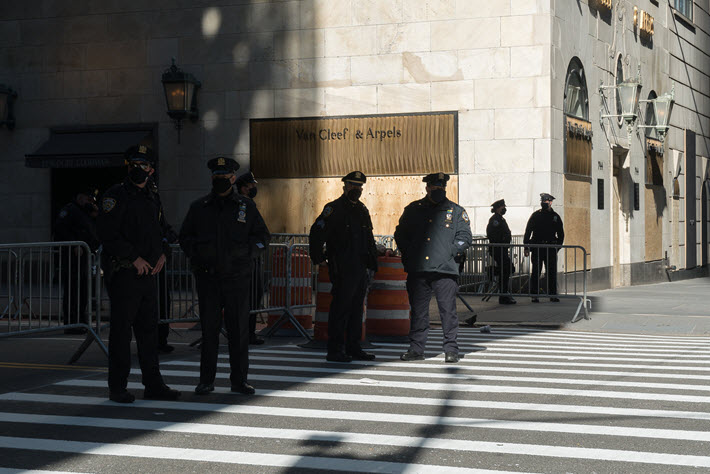 On track for ‘one of the highest-volume years for US trade book sales in NPD BookScan history,’ the States headed into election week with a strong October performance.

New York City police officers on Fifth Avenue on November 4, the day following the US election. Many landmark entries and storefronts were boarded up in case of election violence. Image – iStockphoto: Massimo Giachetti

When she looks at combined ebook and print book sales in the United States, Kristen McLean says, “We expect 2020 to reflect one of the highest volume years for US trade book sales in NPD BookScan history.”

McLean, the executive director and lead industry analyst with NPD Books, has issued her report for October, saying, “Unlike September, which closed a bit flat, October was a healthy month with good incremental progress across the top DMAs (designated market areas).

“Sales were up 7.1 percent year-to-date on a unit basis at the end of October, a year-to-date gain of 0.7 percent for the month, on sales of 558 million units and $9.6 billion in MSRP value (manufacturer’s suggested retail price).”

But what’s ahead is going to be important to see whether the States’ market can actually have stared down the coronavirus COVID-19 pandemic and come out for the year on top: “Next week is historically the point where we start to see volume rise as we head toward the holiday season,” McLean says.

What she’s going to be watching for, she says, is whether the dynamics around the election of Joe Biden as the 46th American president can lead to rising consumer confidence, now that a winner has been called in that historic turnout by voters.

In terms of unit sales and their trends, McLean writes in her memo to the news media that for the week ending October 31, weekly unit sales were seen to fall 3 percent by comparison to the previous week, but they were up 7 percent in that year-to-year comparison to 2019.

“This rise,” she writes, “pushed the market up slightly to 7.1 percent,” a good preparation for what many in the industry hope will be the traditional rise in early holiday buying.

Adult nonfiction sales declined by 500,000 units from the previous week. Some might point to the slowing of the pre-election political book releases as the November 3 vote neared. McLean cites religion, biography, and reference, however, as the content leading the decline in adult nonfiction. 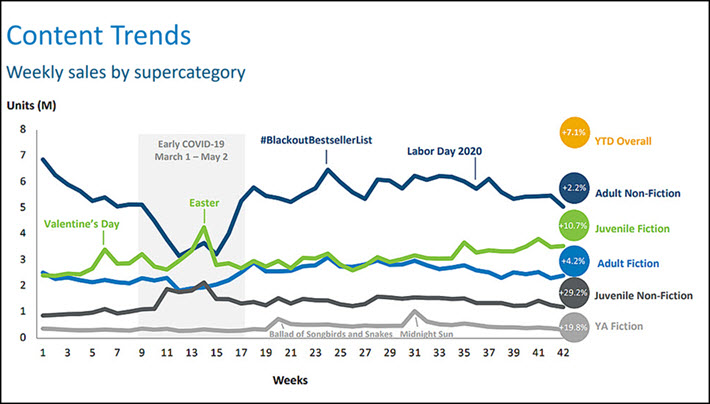 The coronavirus report in the United States continues to grow rapidly more dire.

In its updating survey of the pathogen’s progress, The New York Times points out, “Over the past week, there has been an average of 116,448 cases per day, an increase of 64 percent from the average two weeks earlier.”