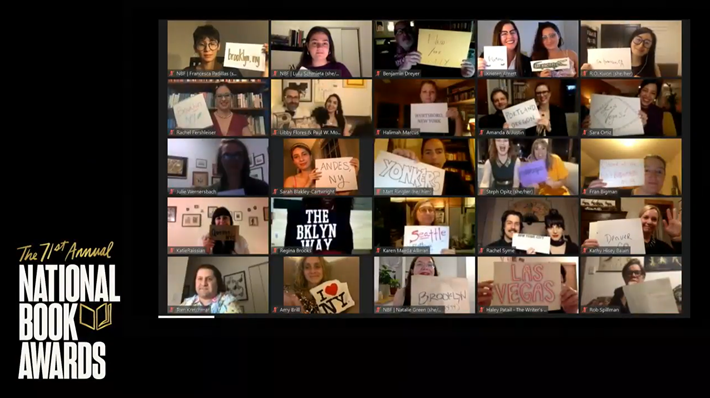 ‘The Power of Words’ 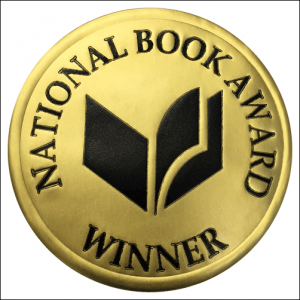 Always well-dressed but usually raucous with good cheer in its sea of spotlit tables in Cipriani Wall Street’s vast ballroom, the online edition of the awards this year settled quickly into a thoughtful, almost gentle grace that suited the difficult year 2020 has been. Only minutes before the ceremony began, the United States’ death total in the coronavirus COVID-19 pandemic passed 250,000 fatalities. There was welcome solace in the National Book Foundation’s perseverance.

We’ll go through the five category award winners first, and then review several other parts of tonight’s show. Regular readers of Publishing Perspectives will find that a welcome internationalist current ran through the show, and in more than the Translated Literature award with which we’ll start. 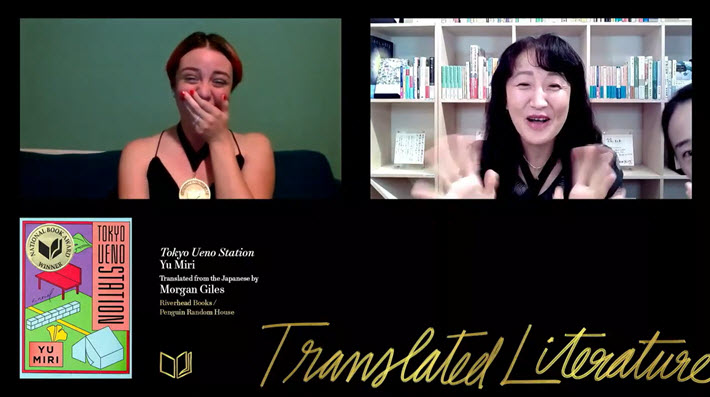 In what may have been the most compelling winner’s comments of the evening, the author Yu Miri spoke carefully in English from her village in Japan. “It is a shame we can’t be onstage together now,” she said to Giles. “I’d like to give you a high-five and a hug.”

“I live,” Yu told the audience of thousands watching the show, “in the former exclusion zone, 16 kilometers from the nuclear zone that exploded in March 2011.” This is in the Fukushima prefecture, and Yu is a South Korean whose native language is Japanese; she was born in Yokohama to Korean parents. “I run a bookstore and write,” she said.

Yu has lived in Minamisōma since 2015, running her bookstore named Full House and a theater space called LaMaMa Odaka, which for some might recall Ellen Stewart’s La MaMA off-off Broadway house in New York. 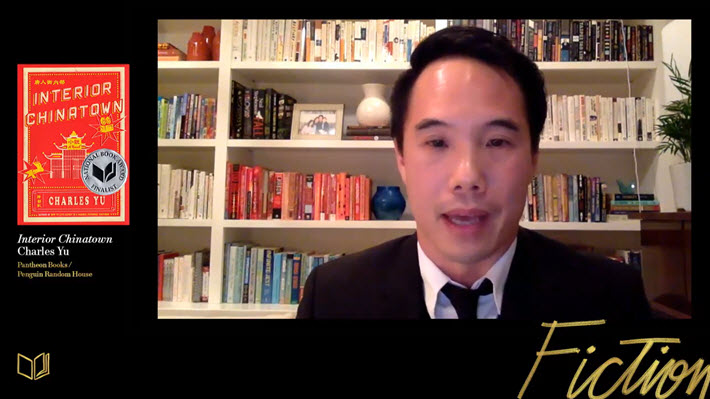 Gracious in his acceptance speech–and announcing that he was going to go “melt into a puddle” afterward–Yu’s gift for satire kicked in quickly as he learned he’d won the award. Confessing that he’d prepared nothing to say, demonstrating how long a shot he’d thought he was for the honor, he good-naturedly carried on to tell jury chair Roxane Gay, “It’s nice to meet you.”

“Wu [the lead character in the book] has worked his way from ‘Background Oriental Male’ to ‘Dead Asian Man’ to ‘Generic Asian Man Number Three/Delivery Guy’ — a long way from ‘Kung Fu Guy,’ which is where he wants to be. Although the lacerating humor in Interior Chinatown never skips a beat, what makes the novel so compelling is its strong commitment to characterization, without which the pointed commentary would be less potent.” 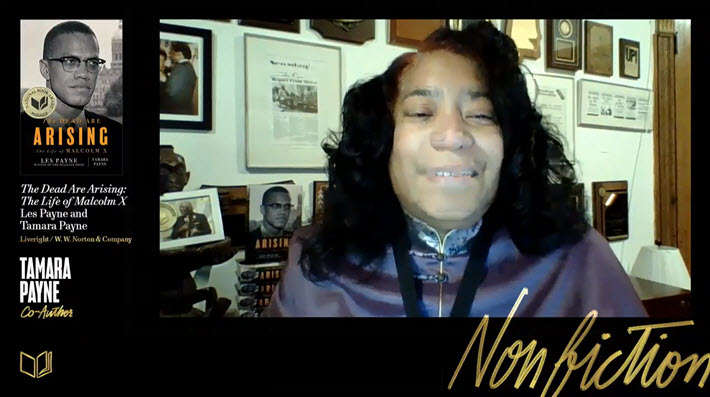 The unusual circumstance of this major new biography’s writing is well known. The 1974 Pulitzer Prize-winning journalist Les Payne, an editor at Newsday, died in 2018, having spent almost three decades researching the life of Malcolm X through interviews with those who knew the civil rights figure.

Tamara Payne, Les’ daughter, finished the work, having served as the lead researcher on the project.

Talking about Malcolm X in her comments tonight, she said, “Today, we see the youth of the world continue to embrace him” amid the racial reckoning that charged the summer with protests, “because the message still rings true.” She thanked her father, “for bringing me on as his co-pilot.” 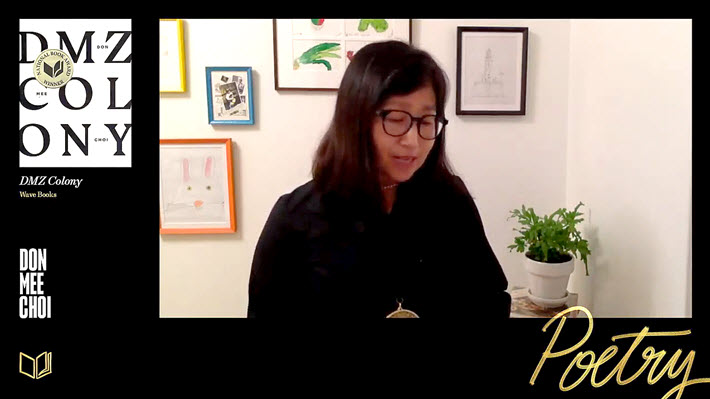 The Seattle-based Korean-American poet and translator Don Mee Choi’s third collection, Jed Munson writes for the Chicago Review of Books, positions the Korean Demilitarized Zone “as much an entity as it is a place, a meta-discursive domain wherein its throng of unlikely inhabitants—endangered birds, political prisoners, orphans, refugees, all colonized subjects and outcasts of empire—are alternately declared and concealed.” 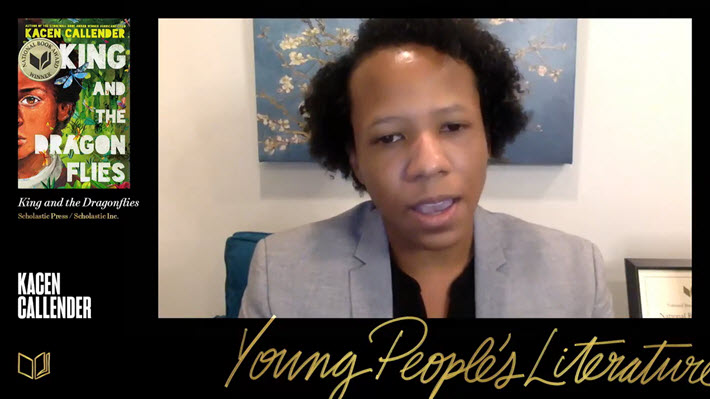 In her challenging book about 12-year-old Kingston’s journey of loss and identity, Callender talks, as she said in her remarks tonight, “about the necessary balance between pain and hope and joy. This has been a difficult year, but I’m grateful for this moment of joy.

“I know” she said, “that I’m not the only one who believes the next generation are the ones who are to change everything.” 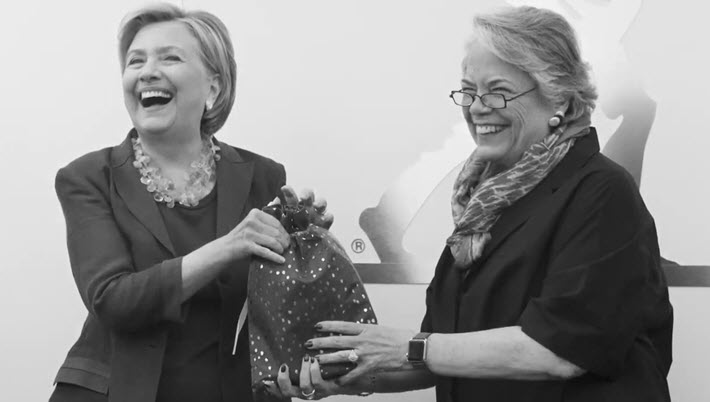 As in its New York City setting each year, the program opened tonight with two awards previously announced. 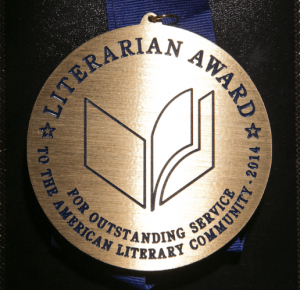 As Publishing Perspectives has reported, Carolyn Reidy, the CEO of Simon & Schuster who died on May 12 at age 71, reportedly of a heart attack, is this this year’s posthumous winner of the Literarian Award for Outstanding Service to the American Literary Community. In the program, she was lovingly recalled in a montage of commentary from Walter Isaacson, Oren Teicher, Rachel Kushner, the show’s host Jason Reynolds, and Bob Woodward.

Reidy’s husband Stephen accepted the award, remembering discussing books with her. “I believe that life together is the real recipient of this award today. Because that shared life is testament to Carolyn’s conviction that reading is one of the greatest things that humans can do.” 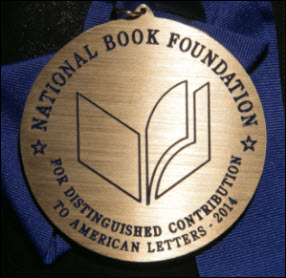 The author Walter Mosley, the recipient of the foundation’s 2020 Medal for Distinguished Contribution to American Letters, was introduced by Edwidge Danticat,  and he in his acceptance speech, he said that he thought of this evening as “but one of 10,000 steps being taken to recognize the potential of this nation.”

Mosley’s closing references were to striving for equality, and they became a segue into a video montage that pointed up the National Book Foundation’s understanding of its mission to be “an institute that celebrates and represents the full scope of what we as a people have accomplished.” 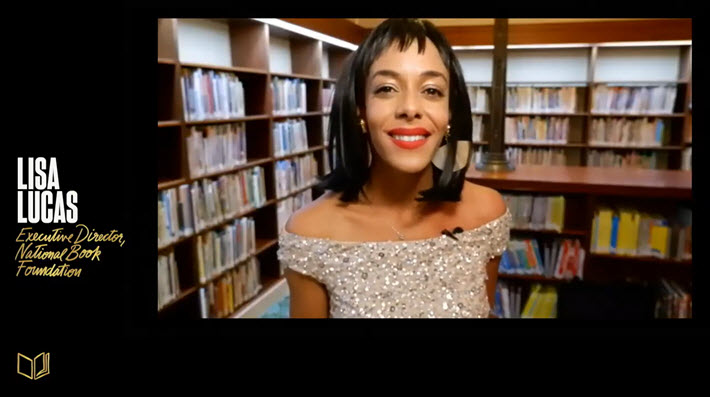 “At the National Book Foundation,” the voice-over for this section of the evening said, “we believe that Black lives matter.” And Lisa Lucas, the outgoing five-year executive director of the National Book Foundation, in her own comments, pressed her steadfast insistence on the foundation’s work as being intimately and urgently connected to the realities of the nation’s trends and struggles.

“We’re so glad to be with our community.” she said. “One book, we know, can change a life, and these books will impact the world, every single one of them.”

Closing out this year’s work with the foundation, Lucas next will move to Knopf to be the new senior vice-president and publisher of the prominent Pantheon and Schocken imprints. Here’s our interview with her, published shortly after the news of her impending departure was released.

“Leaving is bittersweet, and I’m not going to cry,” she said in her comments, which were fed live from the Los Angeles Public Library’s children’s reading room.

She recalled what has become the late John Lewis’ acceptance speech in 2016 on receiving a National Book Award for Young People’s Literature. That moment, in which Lewis recalled being told by an Alabama librarian that the library “was for whites only, and not for coloreds,” has become iconic for the foundation and its awards program with Lewis’ passing this year.

Lucas thanked the foundation’s board, and its staff–”my rocks and my friends and a team I’m so proud to work with every single day”–and handed off to David Steinberger, the chair of the foundation board.

Steinberger spoke from the trustees’ room at the New York Public Library, with the cooperation of the library’s president and CEO Tony Marx. “So far tonight, we’ve raised almost US$500,000, which is great,” Steinberger said, setting a goal for the year at $750,000. 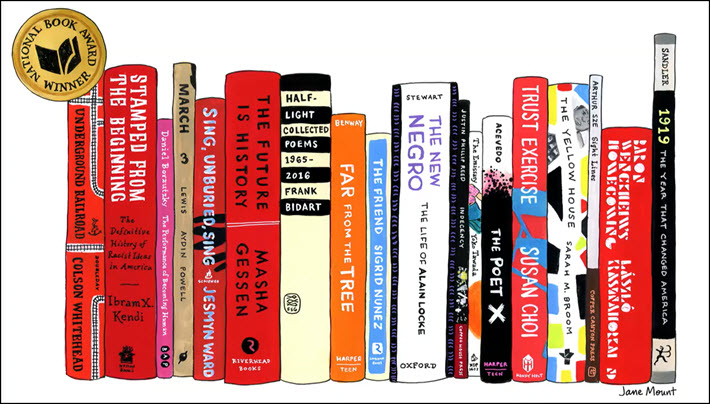 Steinberger also sprang a cross-continental surprise on Lucas, a bright painting of the books that have won National Book Awards during her tenure. The artist Jane Mount will complete the painting for Lucas after tonight’s winners are named.

Happy and moved, Lucas named a new sponsor of the program: “Waterproof mascara.” 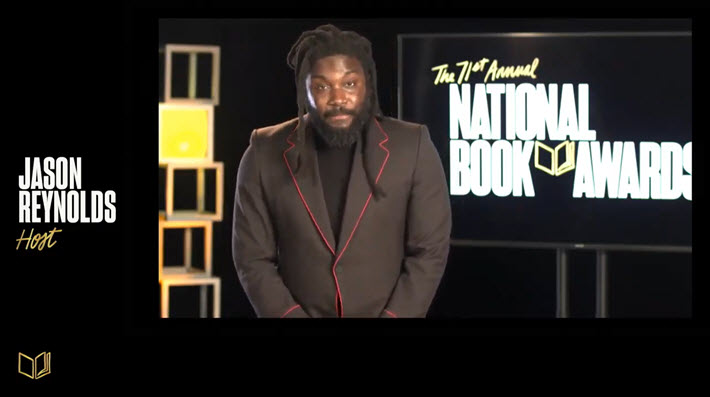 The evening’s host, the gracious and engaging author Jason Reynolds, may have felt most comfortable with the first of the program’s five categories of finalists.

Reynolds, named the 2020-2021 National Ambassador for Young People’s Literature, has twice been a finalist for the National Book Award, himself, and his newest book is Stamped: Racism, Antiracism, and You (Little, Brown Books for Young Readers), which he wrote in collaboration with Ibram X. Kendi.

As a host for the show, Reynolds’ friendly, earnest emcee work was refreshing, a break from the trend of National Book Awards hosts over the years who spend the evening trying to jack up the slow moments with strained efforts at standup comedy. Reynolds, by contrast, was there about the awards’ finalists and winners more than about himself, and that worked as smoothly as the production overall did.

You can review the show in its recording here:

More from Publishing Perspectives on the National Book Awards is here, and on awards programs in general is here. More on the coronavirus COVID-19 pandemic and its impact on international book publishing is here.