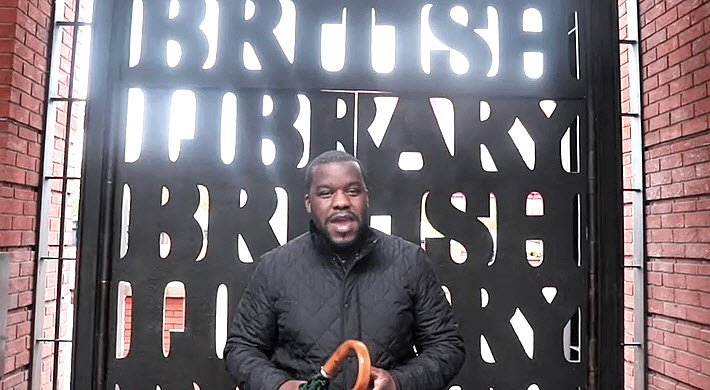 Cleanly produced, the FutureBook 2020 conference has opened today with users only a click or two away from any event.

We today (November 16) have discovered The Bookseller’s secret. The reason its digital editions of various events are better than others’ is that it waits and watches while everyone else walks into walls.

You may recall the slick-as-scones online rendering of the British Book Awards the team produced, this year’s Nibbies. Notice that they delayed those prizes to late June, rather than hurling themselves into the breach in their usual early-May time frame.

Today, the company has opened its 2020 iteration of its annual FutureBook conference. This is the world publishing year’s final major conference. In recent years set at Bishopsgate in London, it’s been accomplished in a single day. This year, as Publishing Perspectives readers know, it’s been cast across the full week.

Quite closely focused on The Bookseller’s UK market—but often with strong context from other parts of the international industry—the FutureBook programming is always worth the trip, and it hasn’t disappointed in today’s kickoff.

What’s ‘Normal,’ and Not 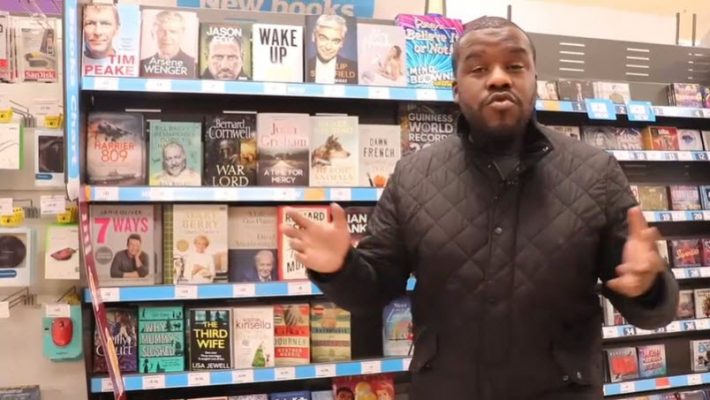 Nels Abbey in his FutureBook keynote, at Tesco in Tottenham. Image: FutureBook

The show-opening keynote with Nels Abbey—the author of Think Like a White Man: Conquering the World While Black (Canongate, 2018)—is a taped and edited piece that wisely takes its opportunity to get out of the Zoom Dome. It starts with Abbey standing in front of a bookcase but soon has Abbey heading out to show you some other, more pertinent bookshelves.

He’s in London’s Tottenham—”a gateway to Britain for immigrants,” as Abbey says, and a part of the city “that has produced more Black writers than any other area in Britain.” At the nearby Tesco supermarket, he points out, the shelves of books for sale “look nothing like us. You wouldn’t recognize the rich local talent that you have in this area” from the array of white authors and cover images displayed at this food store chain.

“I understand that this is ‘commercial practice,’ and sometimes if something makes money, it’s just deemed to work,” Abbey says. But what’s considered “normal,” he asserts—and that would include Tesco’s book inventory—”has granted a significant degree of unearned advantage to some writers,” disadvantaging others.

“In the post-COVID world,” Abbey says, the time for the writing and reading of reports on diversity challenges in book publishing will be over. “It’s time for actioning those reports,” he says. The title of his keynote is “(Don’t) Publish Like a White Man,” and it makes its point. 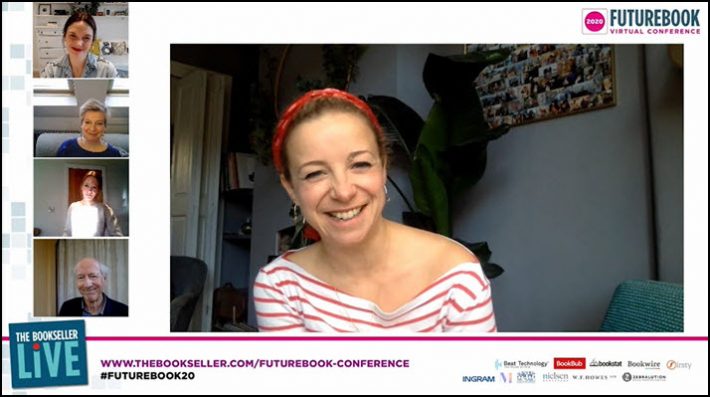 Rebecca Seal in the “State of the Audio Nation” session. Image: FutureBook

That talk has been followed in the first morning by two simultaneous panels (you can run both at once and/or bounce between them). One is the inevitable session about audio–to which the physical FutureBook annually devotes an entire track—and the other is on publishing’s experiences in working from home.

In the latter, moderated by The Bookseller’s Molly Flatt, Pan Macmillan digital and communications chief Sara Lloyd—who joined Publishing Perspectives recently for a session on video in Indonesia’s Jakarta Content Week (JakTent) programming—brings forward a great suggestion. She often purposefully starts a video meeting late, she says, so that participants will spend a few minutes chatting with each other and loosening up.

There’s also a caution from freelance author Rebecca Seal–Solo: How To Work Alone and Not Lose Your Mind (Souvenir Press, September)–about estimates that workers do up to two hours of extra work from home because the office and the home space have converged. Work bleeds into private life, and soon workers are doing more than they’re paid for. “Stop doing that,” she says. Good advice. 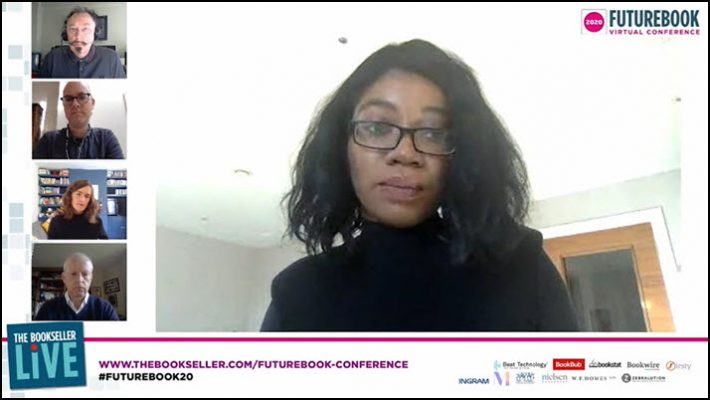 Clarissa Pabi of Acast UK appears in an audio panel to talk about podcasting. Image: FutureBook

Podcast producing company Acast’s Clarissa Pabi talks here about podcasts, those audio elements that remain confusing to some—marketing tools for many but not the same as paid content like an audiobook.

Like many fans of podcasting—and certainly those who work in the format—Pabi says there’s “amazing synergy” between podcasting and publishing and that one thing podcasting can do is help a publisher understand “how audiences are responding to particular genres and formats, rather than thinking abstractly.”

Of course, there’s also skepticism in many parts of the industry about providing audio content in podcasting that might distract from salable products like audiobooks, rather than supporting it. As Saga Egmont’s Lasse Korsemann Horne recently said to Publishing Perspectives, “If your book doesn’t exist as an audiobook, then the consumer is listening to a podcast instead.”

David Shelley With Philip Jones: It’s Not Over 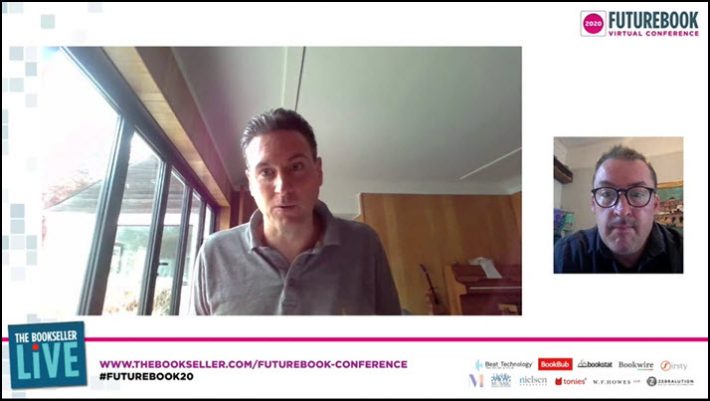 Always a gracious and forthcoming speaker, Shelley is refreshingly forthright about how leadership in a situation like the onslaught of the coronavirus COVID-19 pandemic is always expected to know what to do while, of course, having no more information or experience in such a thing than anyone else has.

“It’s really hard not having, in Frankfurt, those serendipitous conversations that spark your thinking.”David Shelley, Hachette UK

“In March,” he says, “I thought, like a lot of people, that the impact on the book trade could be absolutely catastrophic. We were obviously dealing with a lot of unknowns.” As it has turned out, Hachette seems to be on track, he says, for a good year, in business terms, with the added benefit of discovering that “There are things you assume you can’t do remotely, but you can. The way the business has managed to carry on functioning in all areas has been really pleasing.”

After “a really terrible March” and a “not very good April,” the tide was turning and new traction was being found. Today, Shelley says, a lot has been learned in his company about “the long neck” of pre-publication excitement and how to build it digitally instead of in a physical office complex. “Heroic” work in distribution, he says, is part of the reason the company was able to be so resilient.

Shelley–while speaking, as Jones points out, on a digital substitute for a physical podium–says he’s found that international relations have come to mean more to him in the pandemic experience, and not least because London Book Fair 2020 was lost and the physical event of the 2020 Frankfurter Buchmesse was curtailed by the virus. ‘

“The nuance, humanity, understanding, the idea of bringing people together, different strands together. And it’s really hard not having, in Frankfurt, those serendipitous conversations that spark your thinking.” He also enjoys–and now misses, he says–the colloquy he has in trade show settings with film and television and gaming people. “Other forms of content, I really, really thrive on that and I think our business thrives on that.

“There’s going to be a lot of economic fallout to this. That’s going to impact the amount of money people have to spend on books.”David Shelley, Hachette UK

“There’s a danger of us in book publishing to become siloed,” which is naturally exacerbated by the isolating factors of the necessary COVID-19 responses—currently defined in the UK by No. 10 Downing Street’s latest round of emergency shutdowns and a prime minister who is again quarantining after being exposed to an infected person.

Shelley brings to the discussion not only the humane relief of an industry that has fared far better than some others in the pandemic, but also concern. “Because of furloughing and the government protection of jobs,” he says, publishing hasn’t seen in its own corridors the depths of the economic damage many parts of the system are witnessing.

“Walking around central London,” he says, “it’s a ghost town. There’s going to be a lot of economic fallout to this. That’s going to impact the amount of money people have to spend on books.” Even so, the lack of price protection and the low cost of books, he says, should afford some buffering for the industry.

“But we’ve got Brexit on top of that, which is going to add some friction, as 30 to 40 percent of the trade industry’s sales from outside the UK. I think we’ll be challenged in a lot of different markets. I can see 2021 being a tougher year. I think it’s going to be challenging from a mental health perspective, as well.” 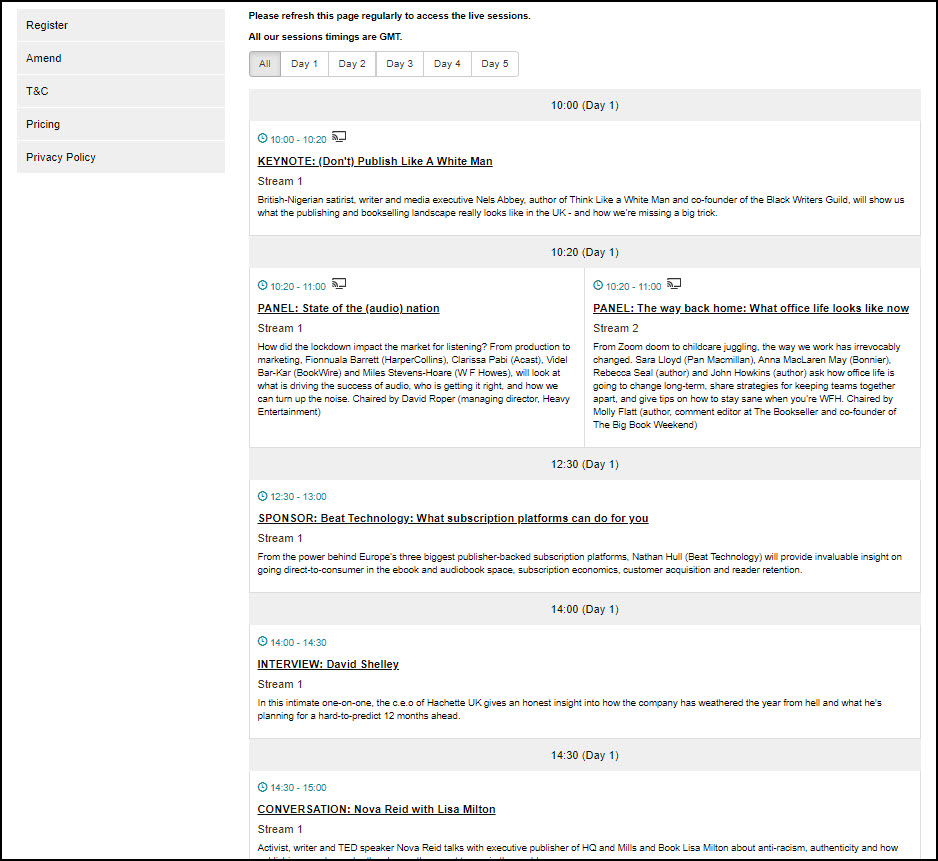 A couple of issues in world publishing’s effort to digitize its big events remain inescapable, even for The Bookseller team. For example, there are those time zones. The 10 a.m. London start means 5 a.m. for those on the Eastern Seaboard of the Newer World, and a red-eyed 2 a.m. for colleagues in Los Angeles.

However, all this is forgiven because you can replay recordings of the events. Once this morning’s keynote and two panels had played through, “Your Special Link” allowed you to review each of those events. This isn’t possible in all events, and organizers of other shows will want to consider this.

(For marketing people: Immediately posting recordings also gets you better news coverage because journalists can review events they missed or need to fact-check. This also makes it possible for your speakers to signal the presence of their sessions downrange to their own followings on social media, directing more eyeballs to your event’s recording.)

The functionality of “Your Special Link” will be welcome to anyone who has missed half of an online session while stabbing around on a site trying to find the right spot. The FutureBook designers have kindly not done too much designing. Instead, “Your Special Link” takes you to a mercifully simple, single page (see above) on which you can see the full week of events, all in type, ready to take you to whichever event you’re there for in a click or two.

The session pages are nicely but not too busily skinned with that signature FutureBook pink branding and they highlight active speakers attractively but unobtrusively. Sponsored moments are called just that, helpful clarity instead of “case study” euphemism. Between events, you see an advertisement roll, but you’re also shown a countdown clock to the next event, appreciated by those outside Greenwich Mean.

Time will tell how much appetite there is for a full five days of programming, of course. The UK industry is an admirably engaged one, however, and might be game. The business there is just close enough to feel friendly and yet just large enough to fuel competition. And a paying crowd has an incentive to stick with it.

Even if a few more hours than needed are on offer, they’ll look good in the FutureBook model. It’s a promising start to the week and that’s a compliment to these organizers, who now have learned what many of us know after programming these major publishing events online: the workload is not virtual. 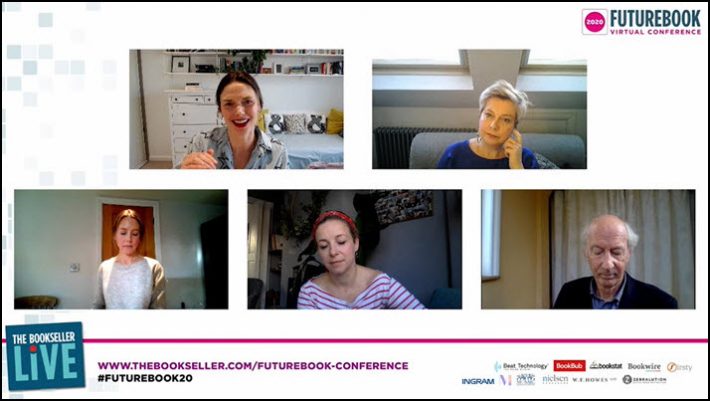 More from Publishing Perspectives on The FutureBook and its conference is here, more from us on The Bookseller is here, more on the UK market is here, and more on the coronavirus COVID-19 pandemic and its impact on international book publishing is here.