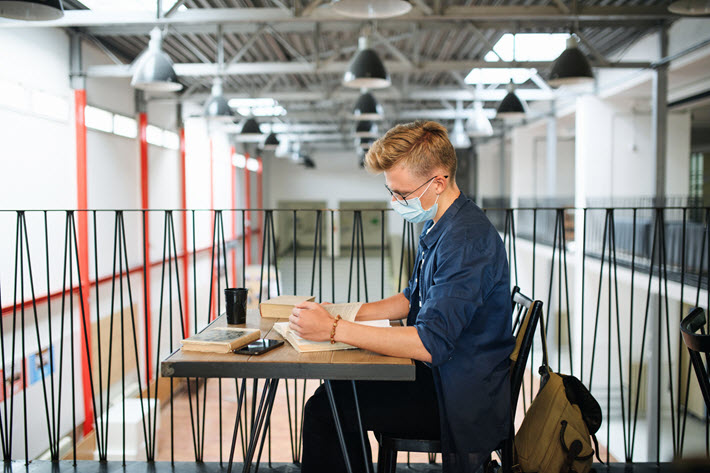 Pandemic-era distance learning has driven up e-textbook purchases by students—not at all surprisingly—according to new information from Student Monitor and the Association of American Publishers.

Weil: ‘The Wide Array of Options’

The last time we heard from the Association of American Publishers (AAP) on how costs of student course materials are going down was in June.

They’re out today (November 6) with a new “fall preview” on the subject, announcing, “Average student spending on college textbooks and course materials continued to decline during the fall semester of 2020, dropping 7 percent compared to the same term last year, according to data from independent research firm  Student Monitor—which  performs national studies for government agencies and nonprofits.

This research looks only at the United States market, although it would be very helpful if the AAP and Student Monitor wanted to make some comparisons to similar factors in international markets.

The data from Student Monitor indicates that average student spending on course materials was US$186 for the current fall 2020 semester, while the corresponding semester last year had an average spending level of $199.

The decline, say staffers at the association, was mainly the result of “a shift in spending from print textbooks to lower-cost e-textbooks, including subscription models.”

And there were corresponding figures observed: the number of units purchased or rented increased by 3 percent, including a 23-percent increase in spending on e-textbooks. Needless to say, the coronavirus COVID-19 pandemic has played a role in this shift toward digital products. 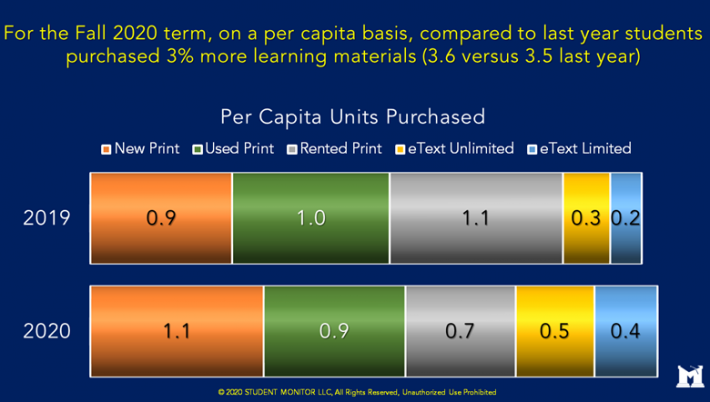 In a prepared statement, Eric Weil, managing partner with Student Monitor, says, “During the fall semester of 2020, distance learning drove widespread adoption of less expensive e-textbooks in both sales and rentals—including through subscription models.” 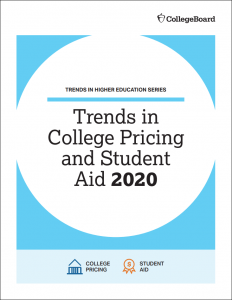 Annual declines in what students have to pay were reflected in the College Board’s release in October of Trends in College Pricing and Student Aid 2020, which, AAP and Student Monitor say, “brought important clarity to the amount that students actually spend on course materials, finding an average of $410 per year.  The annual figure also closely mirrors annual data from both Student Monitor, and the National Association of College Stores’ research arm, Student Watch.”

Student Monitor is indicating that this semester, spending on course materials is distributed over many options.

“Out of the $186 of average student spending during the semester,” media messaging has it, “the organization found that an average of:

With the exception of e-textbooks,. each of these categories saw a decline in average spending compared to the 2019 fall term.

“As a result of the pandemic,” Weil says, “we saw a notable increase in the consumption of e-textbooks. But even during the pandemic, students are taking full advantage of the wide array of options that are available including a growing use of subscription models. Nobody buys 100-percent new; nobody buys 100-percent used; nobody rents 100 percent.” 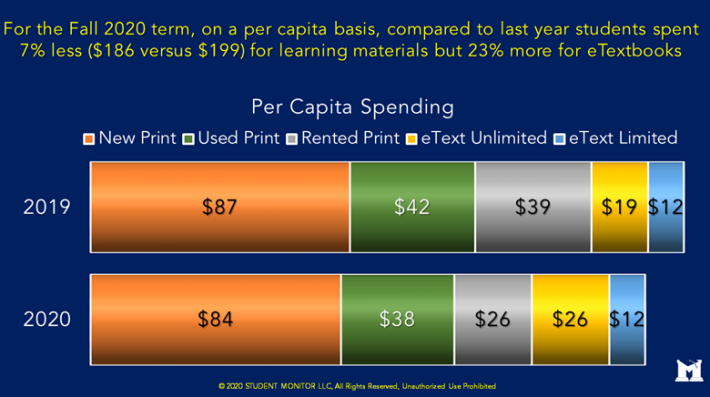 It can seem counterintuitive to find the Association of American Publishers rushing out celebratory statements about declines in spending on some of its publisher-members’ products. It’s rarely announced that lower revenue is a good thing. After all, an awful lot of energy has gone into years of controversy over how much an ebook should cost in the trade side of the industry: we don’t usually hear anyone asserting that less income on digital purchases is a great thing because it indicates that those digital purchases are meeting the needs and desires of the contemporary consumer.

But on behalf of its education-facing publisher-members, the association today says, “The ongoing decline in spending on course materials reflects the fact that students are taking full advantage of the new, cost-effective options that publishers have made available, including initiatives such as ‘inclusive access,’ which provides students with course materials on the first day of class at a reduced cost.

“Other options like subscription models provide unlimited access to a range of textbooks, open course materials, online homework access codes, and study guides, all for one price.”

In short, this is the sector wrapping itself in the pride of progress.

The way AAP’s vice-president of education policy and programs Kelly L. Denson frames it this way: “The consistent decline in student spending on textbooks and other learning materials is a clear illustration of education publishers’ longstanding commitment to affordability initiatives that put students and educators first.”

It’s no secret that the high cost of educational materials has been a struggle for countless students and families and that this problem has been more longstanding than the “affordability initiatives” being pointed to today.

This relatively new tack of using the advantages of digital production and distribution to shoot for lower consumer spending is surely good for educational material consumers today, but it’s also a case of the digital dynamic catching up with contemporary demand. Consumers know as well as publishers do that information today does not have to cost what it once did, and the associated expectations will continue to drive this and many other marketplaces.

Below is a promotional video from the Association of American Publishers and Student Monitor about “inclusive access” programs.

What Is Inclusive Access? from Cara Duckworth on Vimeo.