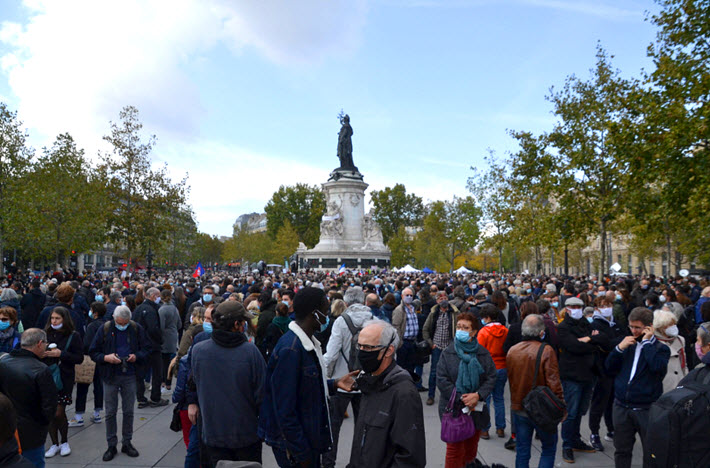 Decrying Samuel Paty’s killing as a ‘cruel and cowardly act’ and an attack on freedom of speech, Frankfurt calls for unity.

‘A Token of Solidarity’

On Frankfurt Weekend 2020, the heads of Frankfurter Buchmesse and the Börsenverein des Deutschen Buchhandels—Germany’s publishers and booksellers association—have issued a statement of solidarity with France after the horrific street beheading of schoolteacher Samuel Paty, 47, in a Paris suburb.

The attack has shaken the nation, French president Emmanuel Macron saying that the teacher was slaughtered because he “taught freedom of expression.”

As James McAuley wrote for the Washington Post on Saturday, “The attack in Conflans-Sainte-Honorine, a quiet, middle-class enclave, is the latest iteration of what has become an all-too-frequent plot line in France: the public airing of Muhammad cartoons followed by deadly revenge. In fact, Paty had recently shown his students caricatures of Muhammad precisely because of that legacy, as part of a lesson on free expression in the midst of the ongoing Charlie Hebdo trial.”

Frankfurt’s president and CEO Juergen Boos and the Börsenverein’ general manager Alexander Skipis said in their message to the news media, “From Frankfurter Buchmesse we send our sympathy and a token of solidarity to the relatives of the brutally murdered teacher, to the teachers and students of his school, and to all citizens of France.

“This cruel and cowardly attack is also an attack on freedom of speech, on the values of our democracy–and therefore on all of us.

“It is shocking when someone who campaigns for the democratic education of students has to pay with his life for it.

“Nevertheless, we must not give up hope and courage: We must stand together as a free and open society, and work to protect our liberty.”

CNN’s Pierre Buet and Elliott McLaughlin report today (October 18) that prosecutor Jean-François Ricard says the assassin–an 18-year-old Chechen refugee named Abdoullakh Abouyezidovitch–boasted in a now closed Twitter account that he had executed one of the “dogs of hell” of French president Emmanuel Macron. Abouyezidovitch asserted that Paty had belittled the prophet Muhammad during a lesson at the Collège du Bois d’Aulne.

Police shot and killed the assailant Abouyezidovitch following the incident on Friday.

Macron: ‘This Is Our Battle’

Tonight, Arthur Berdah and Mathilde Siraud at Le Figaro are reporting that Macron met for three hours today, Sunday, with lead advisors, the session producing a statement from the Élysée Palace that says, in part, “The president wants us to take concrete actions very quickly to stop organizations or individuals who aid or abet” perpetrators of such incidents, and to harden school security.

At the Washington Post, McAuley writes that Macron “did not hesitate to call” the incident “an ‘Islamist terrorist attack.” Speaking at the site of the attack, Macron said, “This is our battle, and it is existential.”

Reports this evening detail huge rallies in many parts of France today, thousands of masked citizens taking to the streets to condemn the killing, even after France reported a new record of 32,427 cases of the coronavirus COVID-19 on Saturday, a new record. A newly implemented curfew went into effect this weekend in Paris, Marseille, Toulouse, Lyon, Lille, and several other cities, in place from 9 p.m. to 6 p.m. nightly.

The BBC reports that 11 people now have been arrested in the investigation underway. “Four close relatives of the suspect were detained shortly after the killing,” the BBC has it. “Six more people were held on Saturday, including the father of a pupil at the school and a preacher described by French media as a radical Islamist.”

In an update today to their report for The New York Times, Norimitsu Onishi and Constant Méheut write, “The gruesome killing appeared to be the culmination of a couple of weeks of tension at the school, Collège du Bois-d’Aulne, in a quiet, middle-class suburb north of Paris.

“Muslim parents upset over the classroom display of two caricatures published by the satirical magazine Charlie Hebdo had contacted school and police officials, but videos uploaded on social media by one father widened the dispute to an outside audience.”

NPR’s report this afternoon from Rachel Treisman says that rallies in Paris were centered at the Place de la République, with demonstrators in many parts of France carrying banners saying, I Am Samuel and I Am a Teacher.

The French prime minister, who represented the state with education minister Jean-Michel Blaquer, wrote in a tweet on his government account from the rallies today, “You don’t scare us. We are not afraid. You will not divide us. We are France!”