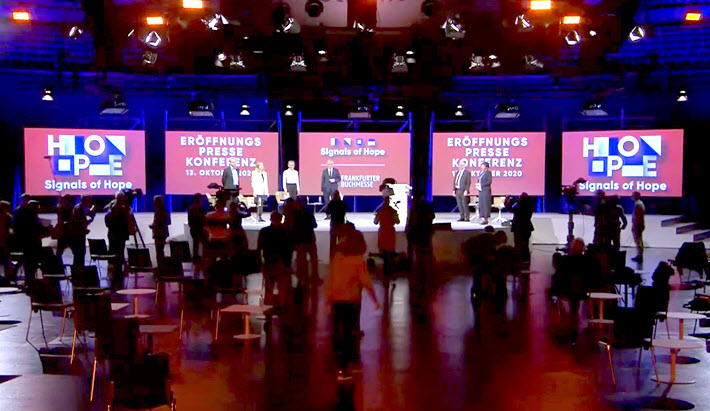 The Frankfurter Buchmesse’s digital edition, running this week in a digital format, has 103 nations represented in exhibitors registered to date, with more than 70 hours of conference programming.

One of the advantages of the digital edition of the 72nd Frankfurter Buchmesse now underway—as the fair’s president and CEO Juergen Boos has said in answer to a journalist’s question this morning (October 13)—is that real-time attendance figures are available, something harder to come by in the usual physical setting of the world’s largest book publishing trade show.

For example, some 750 viewers were engaged during the course of the three-hour academic and scholarly track of the Frankfurt Conference program on Monday, he said (October 12), and today’s rights and licensing focus has had roughly 2,000 registrations.

The show expects to comprise some 2,100 events, all told, and its exhibitors are drawn from 103 countries—as registered so far—with an overall total of 260 hours of programming involved.

Download your free copy of our special Frankfurt magazine here

All told, Boos said, some 4,400 exhibitors are registered in the digital fair, which runs through Sunday (October 18). The organizers seem to feel encouraged at its numbers at the outset of the more than 70 hours of programming being provided for this year’s event. And they say they remain committed to the decision to mount an online evocation of the trade show. It’s anticipated that total viewership will rise during the week as more industry players become focused on the show’s offerings and accustomed to navigating the site.

Nevertheless, the organizers seem to feel encouraged at its numbers at the outset of the more than 70 hours of programming being provided for this year’s event. And they say they remain committed to the decision to mount an online evocation of the trade show. It’s anticipated that total viewership will rise during the week as more industry players become focused on the show’s offerings and accustomed to navigating the site.

The registrants include publishers, literary agents, and service providers. The German-language countries are best represented with some national figures showing attendance levels at:

Boos: ‘A Place To Do Business’ 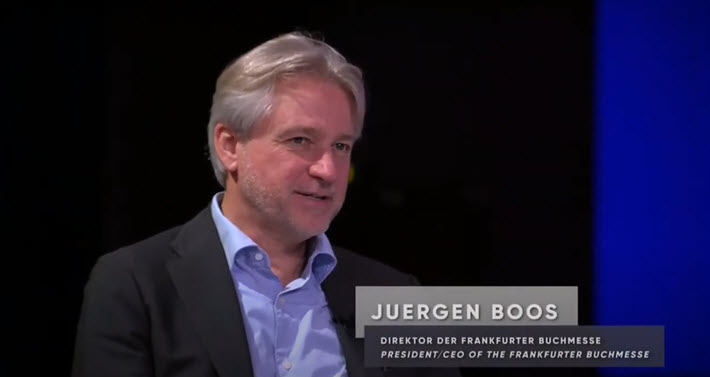 “In this challenging year,” Boos said at the news conference, “we very much wanted to provide a place for people to do business in person. Because you all know how important personal relationships are in publishing. But Frankfurt Book Fair is not the only organization that’s been disrupted by the pandemic restrictions.

“There are places in the world,” he said, “where the book industry is under enormous strain. A quick shift to digital sales distribution of marketing is not always possible, and the publishers and booksellers don’t have the resources on infrastructure to offer digital content to their customers. People and businesses are facing changes and challenges of all kinds right now.”

So it is, as he said, that one driving rationale behind the creation of the digital fair is “to provide connections” to the many parts of the world industry that cannot maintain ongoing business relationships without a form of the hub of activity that Frankfurt becomes in October each year, normally drawing more than a quarter of a million people to its physical setting.

Krupp: ”To Connect Diversity With Dialogue’ 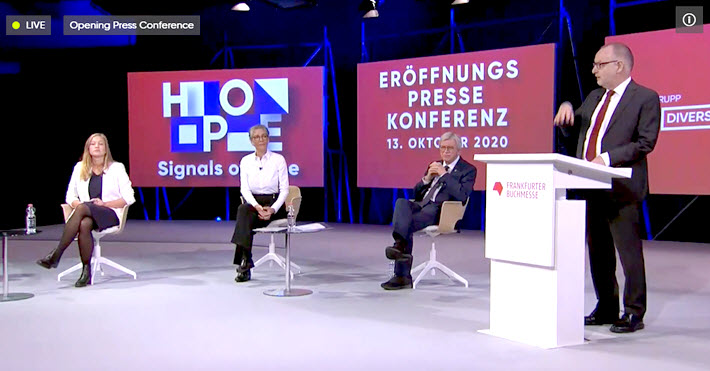 Today’s opening press conference, a fixture each year on Frankfurt Tuesday, was streamed from the Book Fair Stage, the single physical setting at the fairgrounds this year, arranged by ARD, the consortium of public-service broadcasters from various parts of Germany, and devised as a production studio in the Festhalle facility.

“Diversity alone is not a value in and of itself, because diversity can also be that you have lots and lots of different islands next to each other. Diversity must be combined with openness.”Manfred Krupp, Hessischer Rundfunk

As we’ve reported overnight, the various programming efforts of the ARD Stage were to have had a widely spaced physical audience, but Germany’s fast-rising coronavirus COVID-19 figures have caused the fair administration to scuttle its plans for any audience members, other than technicians, staffers, and several local journalists who may ask for permission to be present.

During the news conference, the speakers worked with the “Signals of Hope” branding the fair has adopted to reflect the mood of those in the industry who are struggling with the restrictions and deprivations of a disrupted industry. The sentimentalist nature of the phrase clearly is challenging to work with, particularly in a business setting like a trade show, but each speaker gamely tried to send a “signal of hope” in her or his comments.

Manfred Krupp, who heads up the Hessischer Rundfunk, the German federal broadcasting outlet for the state of Hesse, spoke to diversity as his “signal of hope,” pointing out—in a welcome moment of candor—that there have been many “signals of stupidity” raised during the pandemic in many parts of the world.

“Diversity alone is not a value in and of itself, because diversity can also be that you have lots and lots of different islands next to each other, lots and lots of bubbles which have no connection. That’s why diversity must be combined with openness.”

Krupp’s point was that the strong showing of investment and participation by Germany’s television outlets is important as a link in the communications effort around the fair.

“We don’t just want to reflect diversity,” he said, “we want to connect diversity in the dialogue with each other.” 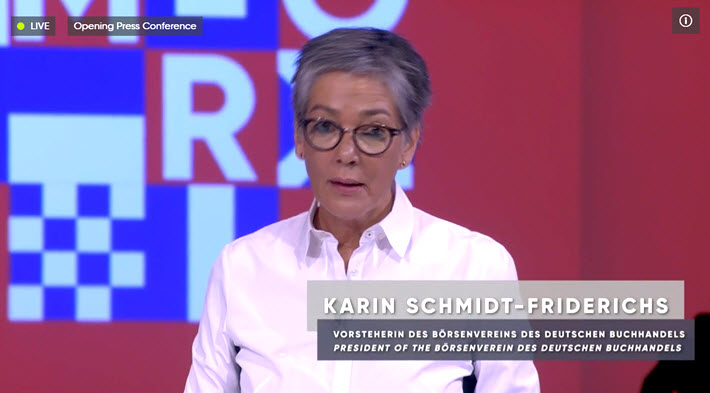 In her comments, Karin Schmidt-Friderichs, chair of  the Börsenverein des Deutschen Buchhandels—Germany’s publishers and booksellers association—reflected some of the statistical observations the organization released in July.

“Books are crisis-proof and an indispensable part of society. But the competing media are not standing idly by.”Karin Schmidt-Friderichs, Börsenverein

Those indicators show a welcome resilience in the consumer base’s interest in reading and in the retail sector’s progress in overcoming pandemic losses. Nevertheless, Schmidt-Friderichs said, it’s the nearby media—the several digitally powered entertainment formats such as film, television, music, gaming—that are perhaps the true long-term challenge for the industry.

“Books are crisis-proof and an indispensable part of society,” she said. “But the competing media are not standing idly by, and the way people live, buy and read is changing.

“Bookshops and publishing houses are working on new ways to generate enthusiasm for books, now and in the future. In addition to those efforts, we should combine the enhanced digital skills developed during the coronavirus pandemic with our traditional expertise. We will continue, moreover, to work at making books more visible and ensuring that children and young people learn to read in all possible contexts.”

Also speaking in today’s news conference were Volker Bouffier, the president of the state of Hesse, which has been staunchly supportive of Frankfurter Buchmesse’s effort to maintain momentum during the onslaught of the pathogen. The fair, he said, like Frankfurt itself, is ‘cosmopolitan, international, located in the heart of Europe and, thus, exactly the right place for a fair dedicated to free thought and free speech.”

And Lydia Hilebrand, cofounder of Munich’s publishing house called &Töchter, spoke to issues of sustainability, another key trend component reflected in the international industry’s focus this year. “It is high time to act responsibly,” she said. “We want to set ecological standards, which is why we have our books produced using methods that are as climate friendly as possible.”