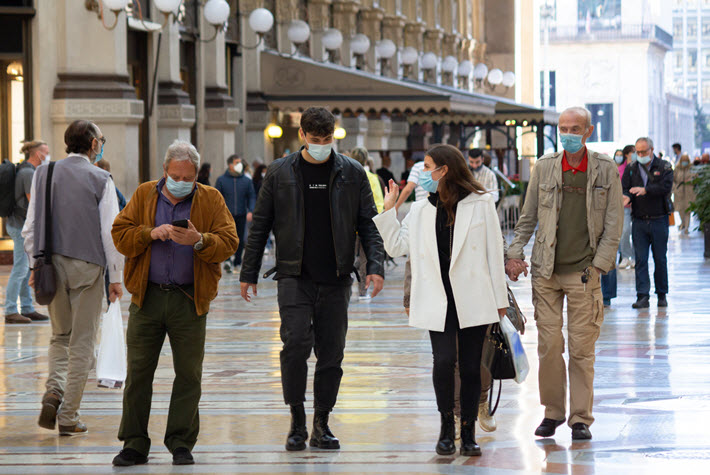 The Italian Publishers Association’s Ricardo Franco Levi and his staff in Milan report on progress in one of Europe’s hardest hit markets. 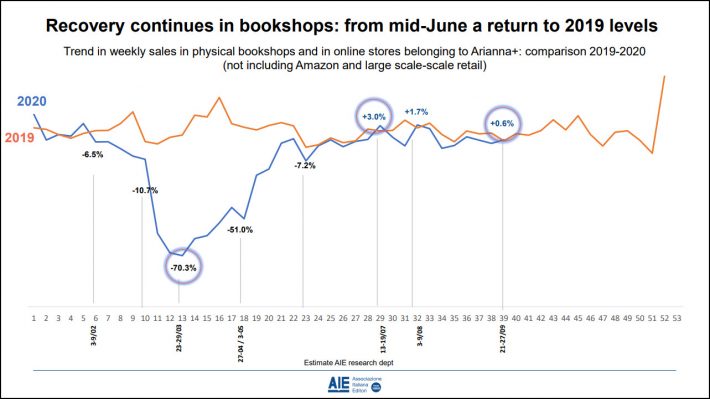 Originally the hardest hit of the European markets in the springtime onslaught of the coronavirus COVID-19 pandemic, Italy between July and September narrowed its book business’ losses in the trade sector from 20 percent in April to 7 percent as of the end of September, in year-to-year comparisons.

That upbeat news comes at a moment of deepening concern for the market, however, as various international news media report that the country has recorded its worst daily increase in cases of the coronavirus COVID-19 since the first outbreaks in the northern part of the nation.

CNN’s Nicola Ruotolo in Rome is reporting that Wednesday’s (October 14) total new cases reached 7,332, the previous record having been 6,557 on March 21, as the Mediterranean nation became the original European epicenter of the contagion. The Giuseppe Conte government has made mask wearing mandatory indoors except when at home. This surge, of course, is part of a widening series of new outbreaks in nations including Germany, France, and the United Kingdom.

The Italian publishers’ association (Associazione Italiana Editori, AIE), president Ricardo Franco Levi—recently made vice-president of the Federation of European Publishers—joined us today (October 15) at Frankfurter Buchmesse in a Publishing Perspectives Talk titled “Promoting a Nation’s Literature Worldwide.” He confirmed both the details of the new reporting and the worries about the newly soaring COVID-19 numbers this week.

We’ll have more information on that discussion, as Frankfurt’s production group makes a recording of the session available to news media. Italy has its Frankfurt Guest of Honor year now set for 2024.

Levi: ‘A Surprising Ability to React and Adapt’ 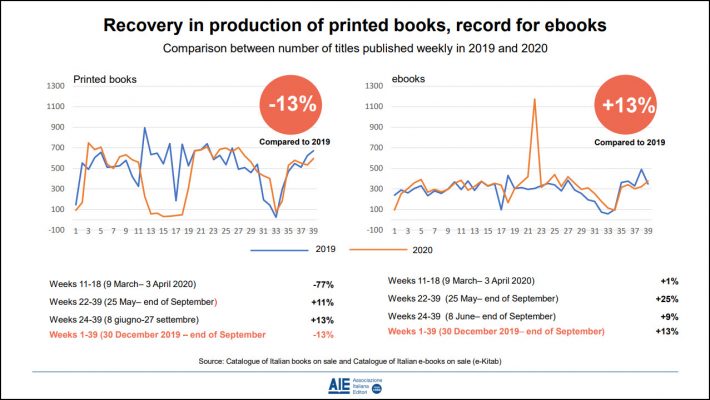 AIE, meanwhile, has reported to us overnight for today that brick-and-mortar retail—the bookstores’ activity—remains sluggish compared to digital retail operations. At the end of September, the association could see a market share for bookstores of 57 percent, up just two percentage points from 55 percent in July and up five percentage points over the nadir of 52 percent in April, as measured by Nielsen data and the AIE’s own research group.

The concern here is between physical and digital retail. In the same third-quarter conclusion of a year ago, 73 percent of book retail was at physical points of sale. As you can see, the current figures show a balance of almost 20 percent now moving through digital retail channels. Brick-and-mortar sales had been trending downward for some time, AIE says, and the concern is that the pandemic conditions have hastened that spiral by driving consumers to online purchases.

In his office’s announcement today from Milan, Levi is quoted, saying, “The post-lockdown recovery that we had already noted in July is continuing.

“The publishing industry has suffered serious damage from the epidemic crisis,” he says, “but at the same time has shown a surprising ability to react and adapt to the new environment.

“Concern for the ongoing pandemic still remains, especially in these days, and it jeopardizes publishing, as well as the entire Italian, European and the global economy.”

For the first time this year, a 30-day run saw bookshops observed by the Arianna network to be in mild positive territory with sales up 0.3 over the same time period on 2019, and that does not include sales made through Amazon. 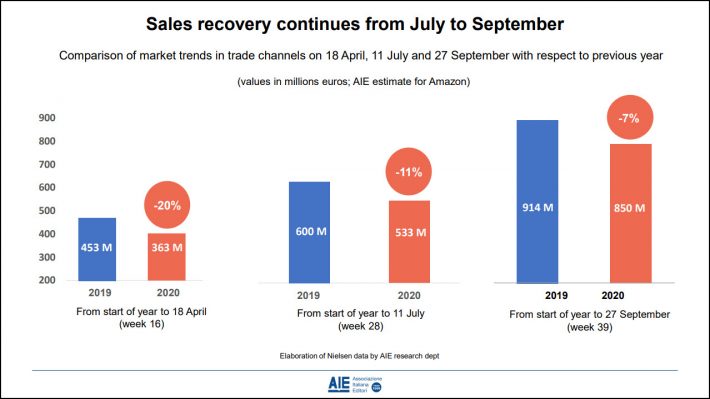 As of September 27, sales of physical books in trade channels were worth €850 million (US$995 million) compared to €914 million (US$1.97 billion) in the same period of 2019. The €64 million lost over nine months–that -7 percent–is seen by the Italian publishers’ community has a heartening sign of progress compared to the -11 percent the book business faced in July, after the dive to -20 percent in April, when €90 million (US$105 million) in turnover was lost in three-and-a-half months.

Italian publishers, AIE says, have returned to production of new physical titles after dropping to a slowdown of 77 percent of normal production in March and the first part of April. In September, it was estimated that the output was down only -13 percent, rather than that near-collapse of -77 percent in the spring.

And as the health emergency feeds the digital market, the AIE reports an increase in ebook production of 13 percent as of the end of September, year over year.

In his comments today, Levi pointed out that in 2019, the Italian market had reached sales of international rights to overseas markets at 8,597 titles, a jump of 9 percent over the 2011 figure of 4,629. 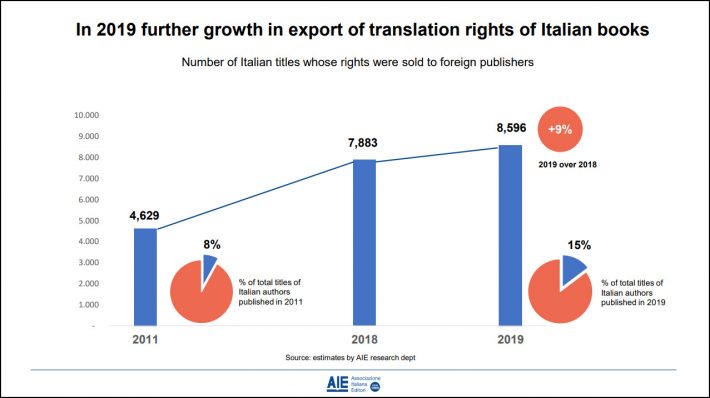