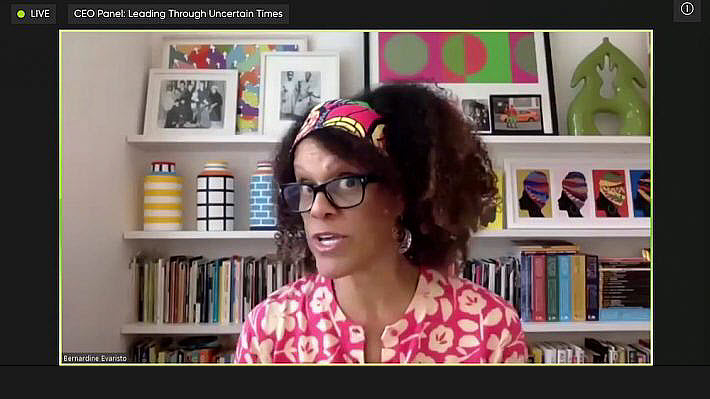 ‘Publishing in the UK is almost entirely white, which has long been unacceptable to many of us,’ Bernardine Evaristo said in her opening keynote at Frankfurter Buchmesse’s Publishing Insights conference track.

‘It’s For My Own Surivival’ 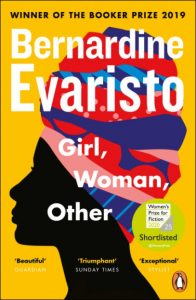 A year ago today, Evaristo won the 2019 Booker Prize for Fiction for her novel  Girl, Woman, Other (Penguin Random House/Hamish Hamilton)—”It’s my Booker birthday,” she said—and she described how “everything changed” after winning the award.

“Literally overnight, everything about my career changed,” Evaristo said. “I felt incredibly validated. I’d written this book about 12 incredible black women and the world was going to know about them.”

The visibility and recognition that came with the Booker has not only meant the book has racked up more translation deals than her previous works, but also that her messages about diversity in publishing can reach more people.

“It’s given me a platform to talk about the things that I’ve been talking about for a very long time”—namely that people of color are underrepresented and shut out of the UK book world because of bias and stereotyping.

At the beginning of her creative career, Evaristo said, she formed a theater company for black women, the first in Britain, because there was no work available for them.

“Black women were limited to playing various stereotypes, and we didn’t want to play those roles,” she said.

As a writer, Evaristo said, she’s intervened in what she sees as the absence of diverse voices in the cultural and publishing world. And with her elevated public profile following the Booker win, her message is going farther.

“It’s important for me, as a practicing writer, to speak up for others, and it’s for my own survival,” she said.

‘Driven to the Stereotypes’

As she did in the theater world, Evaristo has, over the years, set up various initiatives to elevate writers of color in the stark absence of similar projects or recognition from the publishing establishment, and to, as she said, “to make an intervention into the white hegemony of literature.”

“If we’re relying on the media’s representation of black men or Africa, we are going to be driven to the stereotypes.”Bernardine Evaristo

Evaristo described establishing the The Complete Works project, which was aimed at increasing the number of poets of color published in the UK. When she founded this project in 2007, she said, just 1 percent of all poetry published in the UK was by writers of color.

She also founded the Brunel University African Poetry Prize because, she said, contemporary African poets were not known in the world. “I could see the power of prizes to make a difference,” she said.

The prize is going into its eighth year, and Evaristo said that the poets recognized by the prize “are now a force to be reckoned with.”

‘Publishers Know There Is a Problem’

Turning her thoughts to contemporary events, Evaristo said, “The time for initiatives is past in the UK because publishers know there is problem.”

“Publishing in the UK is almost entirely white, which has long been unacceptable to many of us.”Bernardine Evaristo

It took the death of a black man in America at the hands of police, she said, referring to the death of George Floyd in May, to light the powder keg of anger over systemic racism in the UK, and to make the publishing industry really see how big its diversity problem is.

“This is the first time that publishers have actually literally woken up. While there have been successive campaigns” to get publishers to open their doors to people of color, she said, “they have not been listening to us for all these years.”

She called on publishers not only to publish more writers of color, but also to hire more diverse people who represent more communities and can see beyond stereotypes.

“Publishing in the UK is almost entirely white, which has long been unacceptable to many of us.”

But Evaristo said she also wants the publishing community to know that “this is not about diversity as charity and philanthropy.” She said that if her book about 12 black women “can reach mass markets, this tells us that all kinds of literature can be commercially viable.”

In particular, she said, this means publishing all kinds of books—from fiction and poetry to cookbooks and more—by all kinds of writers. She called on publishers to understand their own stereotypes and biases when choosing which books to publish, and to get past them.

“We have to have people working in the industry from all these communities who are looking for something beyond the cliches and stereotypes,” she said. “If we are relying on the media’s representation of black men or Africa, we are going to be driven to the stereotypes.

“People need to be aware of the ways in which their publishing choices have come from the way they perceive certain communities, countries, and continents.”

Concluding her remarks, Evaristo said, “Publishers know what to do: radically alter the demography of their employee” base, and publish books “for every kind of readership.”

More from Publishing Perspectives on Frankfurter Buchmesse is here. More on the work of Bernardine Evaristo is here, more on diversity and inclusivity is here, and more from us on the coronavirus COVID-19 pandemic and its impact on international book publishing is here.