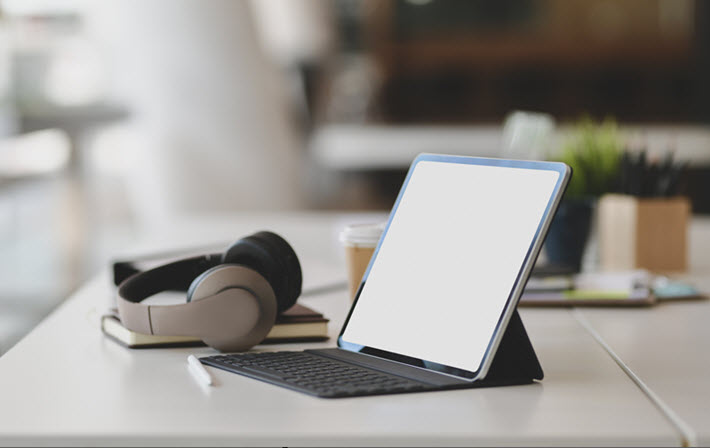 During the Frankfurt Book Fair, Bookwire released the results of its new German consumer survey on audiobook, podcast, and ebook consumption.

The “Battle for Attention”—part of the title of Bookwire‘s conference report from Frankfurter Buchmesse—became a lot more vivid for many professionals participating in the digital evocation of the trade show last week.

That’s because the enormous fair, which draws more than 250,000 people annually in its physical setting at Messe Frankfurt, was, for once, almost entirely online. Except for several ceremonial and locally produced television events, the world publishing industry existed in at its trade-centered height precisely where much of film does and television does and music does and gaming does: on screens.

Without those beloved print volumes propped on shelves in stand and after stand, without the gliding moving sidewalks between halls, and without the beeping of catering trucks moving in reverse, the center of international publishing for a week was just a click or two from your Netflix and Amazon Music accounts.

And what Videl Bar-Kar, who heads up audio at Bookwire GmbH in Germany, presented Thursday (October 15) was the result of survey work that reached 2,335 people in Germany aged 16 to 65 about their media use. In addition, 1,000 consumers of ebooks, audiobooks, and/or podcasts were surveyed about their usage patterns. 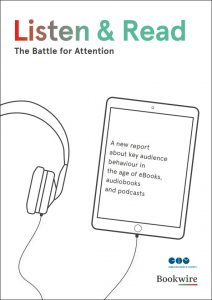 A recording of Bar-Kar’s presentation, like others in the Frankfurter Conference series, has not been posted for review, so as yet we can’t offer you a link to see it. Frankfurt’s organizers say that these recordings of four days of conference programming and other events will be available “soon.” No date has been announced. Bookwire’s Bar-Kar also joined us in a Publishing Perspectives Talks session, and we look forward to sharing that with you, too, as these events’ recordings become available.

The Bookwire presentation’s independent research was done in August and September and Bookwire worked with “GIM,” the Heidelberg-based Gesellschaft für Innovative Marktforschung research company in producing the survey.

The work was distilled into 12 points of insight for purposes of presentation.

Bookwire is a strong provider of a wide range of services including production, conversion, DRM, distribution to points of sale and libraries, marketing, the dispatch of digital review copies, reports and analysis, and invoicing.

Here are several top-line messages from the report.

What Bar-Kar and his research refer to as “mainstream” refers to people using two or three of the digital media in question—ebooks, audiobooks, and podcasts. It’s not clear from this work if it’s possible to know what percentage these formats’ usage comprised of a user’s overall media array. If a user said she’d used an ebook or audiobook in the last six months, how does that compare with how many print books she’d read, how many films or television series she’d viewed, and so on? 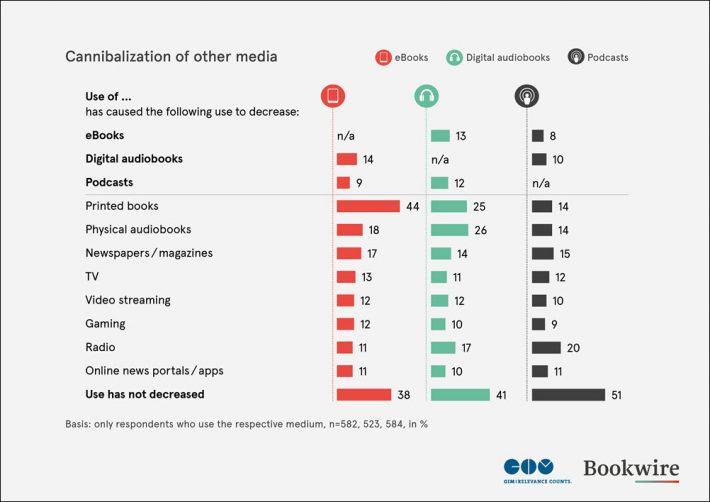 A favorite question, of course, is whether audiobook, ebook, and/or podcast consumption tends to preclude a user’s consumption of other content. The standard response of those who work in audiobooks, ebooks, and/or podcasts is, “Of course not!” And this survey doesn’t disappoint.

“They only cannibalize each other to a minor extent” is the charming lead answer here. Nibbling on each other’s toes, as it were, nothing worse than that. 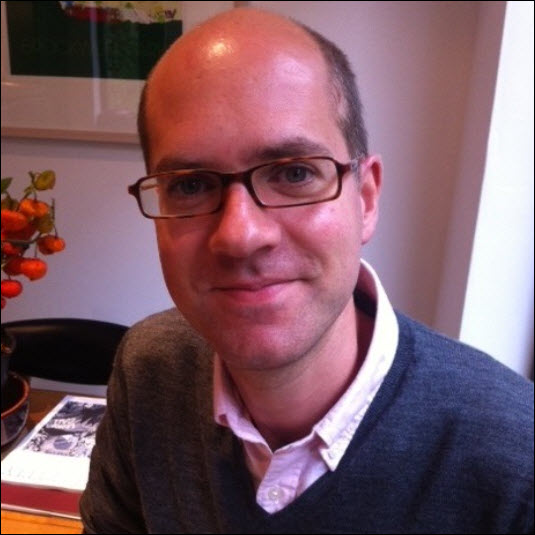 “Ebooks, audiobooks, and podcasts hardly cannibalize each other at all,” the survey writers say. “A maximum of 14 percent of users said that they use ebooks, audiobooks, or podcasts at the expense of one of the other two media. While ebooks and audiobooks are used for relaxation and entertainment more so than podcasts, podcasts tend to expand knowledge and education and/or are more informative about current issues.”

Well-intended as it may be, this commentary is probably the least reassuring in the report. Unless one has a chart of one’s format usage and thus can tell, “Gosh, a half-hour of my podcast time was eaten up by my e-reading,” it’s quite subjective as to how much a user might feel is going into one mode or another.

And the more important area of inquiry here is about the challenge that other media (including podcasting) may present to reading in various formats. Many people today say that with so much beautifully produced storytelling available in television and film formats, their reading in all modes is taking a hit. By contrast, attrition to other forms of reading is less a worry. If publishing “loses” someone from print to ebooks, publishing should feel relieved that they didn’t move to Streamer City and stop reading entirely.

The survey does offer this comparatively useful point—still inside the publishing sector, but going beyond the three key formats in question: “Looking at cannibalization effects on traditional media, just under half of ebook users (44 percent) said that they read fewer printed books because of their digital counterpart. This figure was 25 percent among audiobook listeners.”

On podcasts, however, there’s a bit of a retreat: “Podcasts, on the other hand, can be regarded as a complementary medium for almost all media consumers. Although there is some cannibalization of classic radio (20 percent), it hardly affects other media.”

That’s the kind of defense of podcasts you hear primarily from the makers, purveyors, and fans … of podcasts.

And the idea of podcasts being complementary to book-based media is not one embraced by everyone. In our writeup from our Frankfurt magazine on the new digital hiring being done at Denmark’s Saga Egmont, for example, publishing director Lasse Korsemann Horne said, “If your book doesn’t exist as an audiobook, then the consumer is listening to a podcast instead.”

In short, things are still unsettled in terms of where podcasts stand next to books, especially in the audio space. 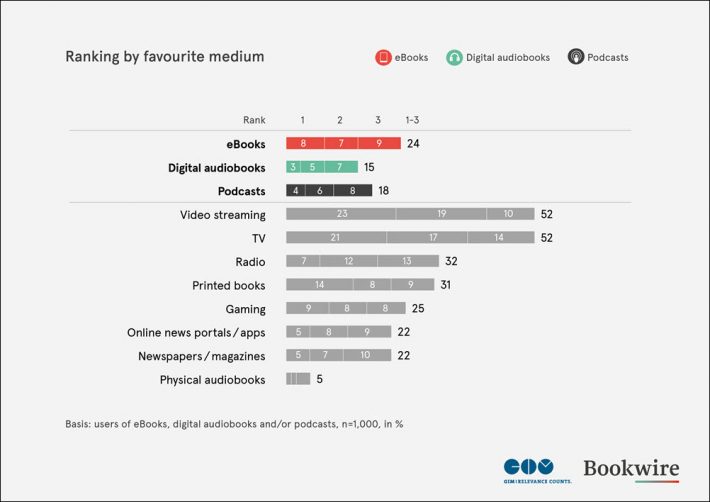 Perhaps easier to get our publishing heads around, a section of the survey asked “Which are Your Favorite Media”? Here, it looks as if reality has arrived at the door to reading’s future in this particular survey.

By far, the respondents went for video streaming and television as their favorite of several media.

Radio and print books were next, followed by gaming, online news, and newspapers.

Digital audiobooks and podcasts came in behind all of those. Ebooks fared a bit better, beating out online news and newspapers.

Not even those podcasts were competitive to media outside the trio in the survey, except for physical audiobooks, which in most markets have long been on the decline as downloaded audio took over.

‘The Clash of Media Generations’ 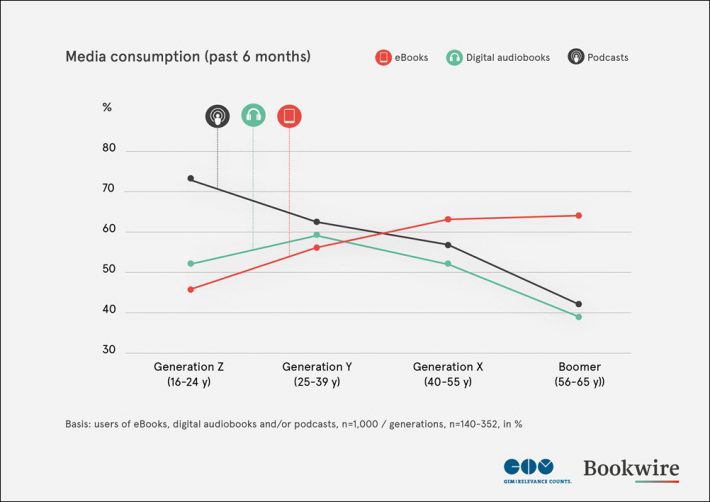 Where Bar-Kar’s work shows real promise in terms of how it can inform us is in his parsing of various generational responses.

His and the report’s look at Gen X (40 to 55 years), Gen Y (25 to 39 years), Gen Z (16 to 24 years), and the so-called baby boomers (56 years and older) is quite interesting, and not least because the youngest of the generations is showing more interest in podcasts than audiobooks or ebooks.

If you follow the reasoning that a podcast is less likely to deliver a book in the same way that an ebook or an audiobook does, then it looks as if the tender-aged Gen Z folks are doing a lot less reading.

You can see the report in its entirety in exchange for registering at Bookwire here.