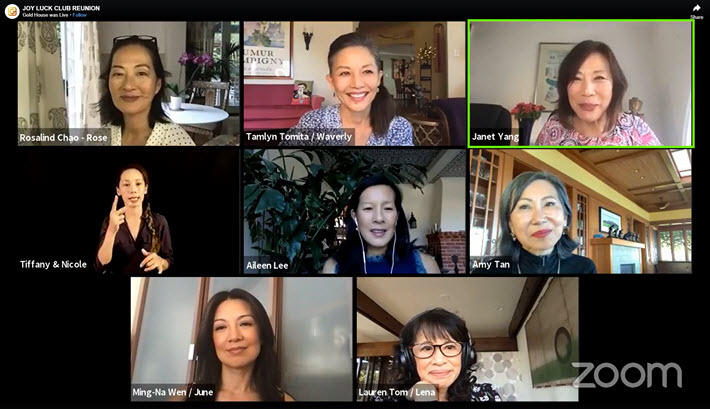 ‘To Create Space for Our Community’

The nonprofit organization called Gold House describes itself as “the premier collective of pioneering pan-Asian founders, creative voices, and leaders,” with a mission to “forge stronger relationships that empower Asians to have more authentic, more successful, and healthier lives to, in turn, advance all of society.”

Dedicated to working against bias and cultivating respectful connections, the organization may be making one of its most important moves this week, in forming its Gold House Book Club, “to help Asian-Americans better understand their identity and culture in today’s political and social climate.”

Officially opened on Thursday (October 1), club members have had a kickoff event, in a spirited and engaging Zoom discussion featuring and honoring Amy Tan, author of The Joy Luck Club (Penguin Random House, 1989).

Wen said to Tan after reading a short passage, “It’s amazing how you can encompass so much in one small page.

The actresses discussed how real progress for Asian-American actors would mean being cast in leading romantic roles. “Especially for Asian men,” Tan pointed out.

Modeled on the success of that opening with Tan, the Gold House Book Club is set up to feature a succession of books with related programming. A new book is taken up monthly, and lists of upcoming reads are to be posted every six months.

A download of the first six months’ lists is here.

The book chosen for this month is Dear America: Notes of an Undocumented Citizen by Jose Angonio Vargas (HarperCollins/Dey Street, 2018). That one is chosen in recognition of Filipino American History Month.

And each list is to include a list of Asian-American children’s books, curated to assist families in introducing diverse literature to their children.

“The live virtual events,” the club’s organizers say, “will engage the community in identity-driven conversations, ranging from an interactive children’s story hour to panel discussions,” with selected authors serving as advisers.

‘A Year of Reckoning’

The Gold House club is not just for women, something the Joy Luck Club summertime event might suggest. Also on the advisory council, for example, is the Vietnamese American author Viet Thanh Nguyen, whose The Sympathizer (Grove Atlantic) won the 2016 Pulitzer Prize for Fiction. Also working with the group are journalist Jeff Yang and Cowboy Ventures’ Aileen Lee.

Cindy Joung, the new book club director, in a prepared statement, says, “This has been a year of reckoning for race in America, and many APIs [Asians and Pacific Islanders] have reexamined what it means to be Asian-American.

“We recognized this unique and galvanizing opportunity to create space for our community to explore the issues that inform our identity by leveraging the rich catalogue of stories written by API authors. We’re excited to contribute these moments of discussion and introspection while highlighting our representation in the literary landscape.”

More coverage from Publishing Perspectives on issues and trends in Asian markets is here. And more from us on the coronavirus COVID-19 pandemic and its impact on international book publishing is here and at the CORONAVIRUS tab at the top of each page of our site.