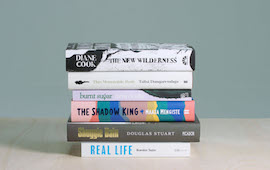 The six-title Booker Prize for Fiction shortlist carries forward four of the eight debuts that were included in its late-July longlist. 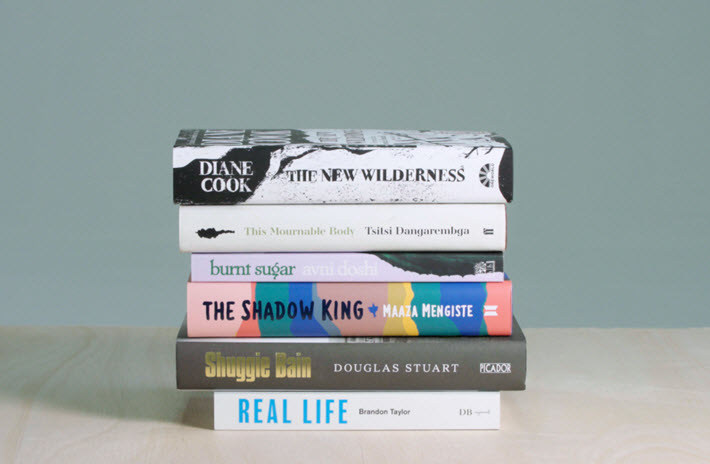 Two leading national awards have named their shortlists today. Our story on the German Book Prize is here.

Wood: ‘An Act of Discovery’

At a news conference this afternoon in London (September 15), the Booker Prize Foundation has announced its six shortlisted authors and titles for the Booker Prize for Fiction, a 2020 round of the coveted awards dominated by debut efforts.

Four of the six novelists named are there for debuts–Diane Cook, Avni Doshi, Douglas Stuart and Brandon Taylor. This is gratifying as a sign of  new literary talent entering the crowded awards scene in the United Kingdom.

Indeed, the foundation’s literary director Gaby Wood says that the jurors themselves this year were surprised to find so many debuts turning their heads. “Why were they surprised?” Wood asks. “They were focusing on the books. No one wins the Booker Prize because of who they are.”

And in answer to a question from Publishing Perspectives on this point during today’s news conference, juror Sameer Rahim spoke well to the point, saying that the jurors in many cases encounter the books submitted in something earlier than their published format–in PDF in some cases–and “we don’t really have time to Google authors” in working through the initial pool of more than 160 titles. He and his associates are indeed, he agreed, surprised (and not unpleasantly) to find these debuts on their long- and shortlist.

Rahim also made the point that what the industry calls a debut may be an author’s first published book but not, of course, necessarily that writer’s first completed effort.

In a similar vein, members of news media today pointed out the prevalence of American talent on the shortlist. Since the 2014 expansion by the trustees of the field to embrace “writers of any nationality, regardless of geography, providing they are writing in English and published in the UK” or Ireland, there have been objections to this “evolved” policy.

“The shortlist of six came together unexpectedly, voices and characters resonating with us all even when very different.”Margaret Busby, Booker Prize Jury

Wood, however, confirmed that the Booker is firmly an international award, both in its purview and in the impact it can have in many markets of world publishing.

Of course, in any winnowing of candidates, this also means that some favored longlisted faithfuls have left the Booker field for this year, including the acclaimed Hilary Mantel with the third book in her Wolf Hall trilogy. Both the first and second books in the trio, Wolf Hall and Bring Up the Bodies, were winners in 2009 and 2012 respectively, and Mantel was longlisted in 2005 for Beyond Black.

Also dismissed is the American stalwart Anne Tyler, a veteran of 23 titles, whose Redhead by the Side of the Road was on the longlist.

The presence of so many debuts is especially interesting in a season in which it may be hard for debut writers to find a footing in the marketplace. With many titles postponed by publishers to the autumn from the spring because of the coronavirus COVID-19 pandemic, booksellers in many markets, not just the UK, are bracing for an extremely heavy load of releases in which new talent may be harder than usual to spot.

Four of the six authors named today are women, and four of the publishers standing behind these titles are independents–notably including Daunt Books Originals, launched just this year as “an imprint for bold and inventive new writing in English and in translation.”

In a statement on the release of the shortlist, the foundation’s literary director, Gaby Wood, said, “Every year, judging the Booker Prize is an act of discovery. What’s out there, how can we widen the net, how do these books seem when compared to one another, how do they fare when re-read? These are questions judges always ask themselves, and each other. 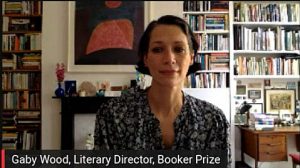 “This year, there has perhaps been more discovery than usual, both in the sense that debut novels are in the majority, and because the judges themselves were surprised to find that was the case.

“A book wins because of what it does. What has transpired is a testament to the judges’ faith in–among other things–first fictions: They have found these writers to have much to say, and found them to have said it in a way that became even richer on a second reading.”

And the jury’s chair, critic and former publisher Margaret Busby, said, “As judges we read 162 books, many of them conveying important, sometimes uncannily similar and prescient messages.

“The best novels often prepare our societies for valuable conversations, and not just about the inequities and dilemmas of the world−whether in connection with climate change, forgotten communities, old age, racism, or revolution when necessary−but also about how magnificent the interior life of the mind, imagination, and spirit is, in spite of circumstance.

“The shortlist of six came together unexpectedly, voices and characters resonating with us all even when very different.” 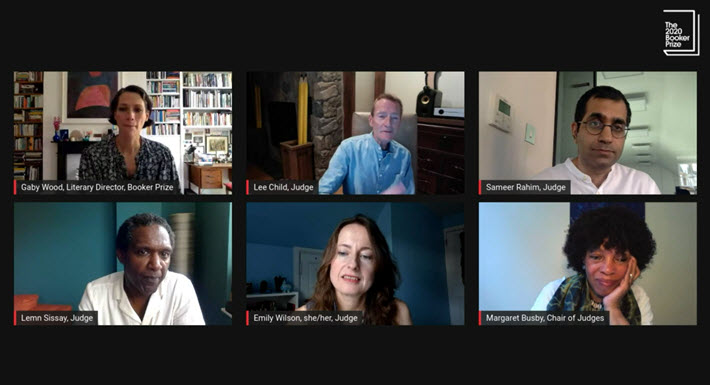 The 2020 Booker jurors and Gaby Wood in their news conference

The digital news conference held today–and a “Shortlist Watch Party” for readers set for 5 p.m. BST (1600 GMT) on the prize’s Facebook and YouTube pages–reminds us that much is not routine in this exceptional year.

“Lockdown has meant,” Busby said, that this year, “the judges have never been together in the same room.” She also referred to the loss of her sister during the pandemic, a tragic note, of course.

Lee Child, during the news conference, said that he’d been disappointed not to be able to gather physically with his colleagues, but that he found the Zoom alternative “curiously intimate” and satisfying for the purpose.

At this writing, the 6:22 a.m. ET update (1022 GMT) of the Johns Hopkins Coronavirus Resource Center places the United Kingdom at 14th place in the world for COVID-19 infections, at 373,555. The market is third in the world for deaths, with 41,726 fatalities in a population of some 67 million.