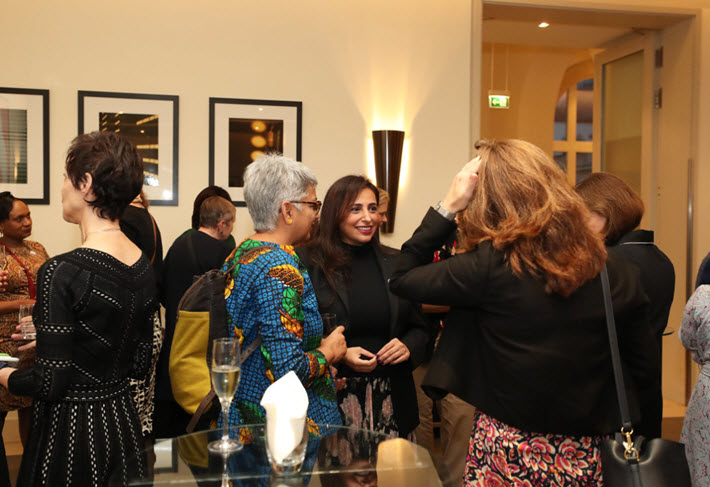 Now 18 months old, the international PublisHer professional network of ‘bookwomen,’ rolls out elements of its new strategy for women in world publishing’s leadership.

At a PublisHer event during the 2019 Frankfurter Buchmesse. Founder Bodour Al Qasimi is at the center. Image: PublisHer, Nabs Ahmedi

In the first of these interviews—the series is called #Unmasked, and is now available on the organization’s YouTube channel—the Nairobi journalist and storyteller Maïmouna Jallow interviews Angela Wachuka, who with Wanjiru Koinange has co-founded the nonprofit Book Bunk Trust.

These are familiar players to Publishing Perspectives readers.

Jallow, who directs Positively African, was featured in last summer’s Nairobi PublisHer dinner, with her stage adaptation of Lola Shoneyin’s novel The Secret Lives of Baba Segi’s Wives (Serpent’s Tail, 2010). Author Shoneyin, for her part, has just announced the coming iteration of Lagos’ Aké Arts and Book Festival, as we reported last week. 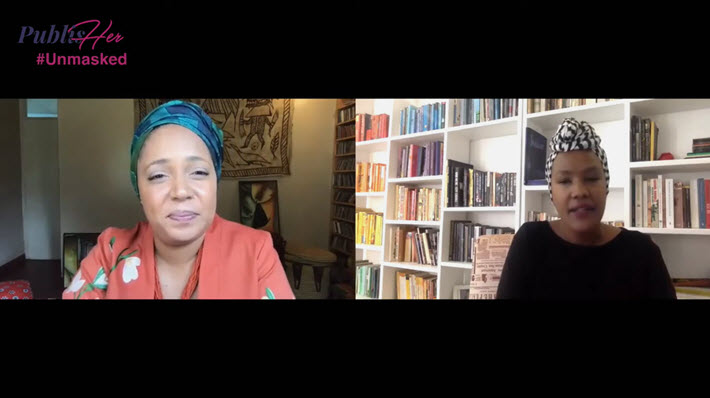 And Angela Wachuka’s work is familiar for Book Bunk’s centerpiece project of restoring the McMillan Memorial Library in Nairobi’s city center. She talks with Jallow about how “One of the things that really bothered us from the beginning” was that the McMillan facility was originally opened in 1931 as a feature of what Wachuka calls “an ode to colonial opulence,” second only in age in Kenya to Mombasa’s Seif bin Salim Library.

“The thinking at the time was that Africans would not use” the McMillan Library “at any point.” Its restoration today is thus as much a redirection of the facility’s mission and availability as it is a redevelopment of a valuable physical property.

A new #Unmasked interview is expected to be posted to PublisHer’s YouTube channel each Thursday.

The new #Unmasked series of interviews is part of a wider initiative from PublisHer, an effort to equip women in publishing with outlooks and approaches that may help them gain traction in the international industry, particularly once travel and more nearly normal business activity is permitted in our vaccinated future.

While for many of our readers this goes without saying, we want to be clear that at this writing, the coronavirus COVID-19 pandemic is not over, as dearly as we all may wish it were. You have only to follow the alarming new spikes in the pathogen’s numbers in Europe—here is Francesco Guarascio’s coverage for Reuters of the European Union’s stark warning to its governments not to shorten quarantine timing—to see this.

The wisdom of PublisHer’s approach is that it’s capturing some of the remaining time under the brunt of the contagion’s threat to create a multi-pronged strategy that women in publishing can access and develop now, with an eye to positioning themselves for making new ground in publishing’s leadership when the world’s commercial engines rev back up to speed.

You’ll noticed, too, that the organization is beginning to use the useful term bookwomen, more frequently found in British-English dictionaries than in American-English references.

A key element of this strategy is the creation of a team of highly placed mentors in the business.

“The women we speak to consistently call for mentorship,” says Bodour Al Qasimi, PublisHer’s founder and vice-president of the International Publishers Association (IPA). 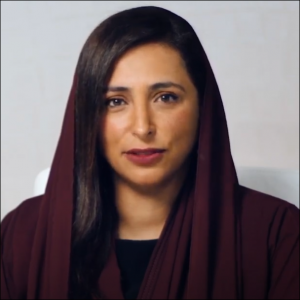 “It’s something our board feels very passionately about. We believe mentorship will create positive ripple effects in the publishing sector, adding immediate value and inspiring mentees to support other women around them

“This is why we’ve started this scheme.”

While the mentors announced today are all women, it’s interesting to note that one of them—PublisHer board member Tracey Armstrong, president and CEO of Copyright Clearance Center—has said in past interviews with Publishing Perspectives that women should be mentored by men as well as by other women.

As the mentoring program develops, it will be interesting to see if that logic plays out in participation by male leadership in the industry.

The program is set up as “a deliberately uncomplicated” plan that offers a confidential, one-hour meeting on a video conferencing platform. Mentors and mentees agree whether to continue to meet and how often. The program is free of charge.

Bodour points out that the mentoring program is called for as part of PublisHer’s Diversity and Inclusion Guidelines (PDF), which were published in July. 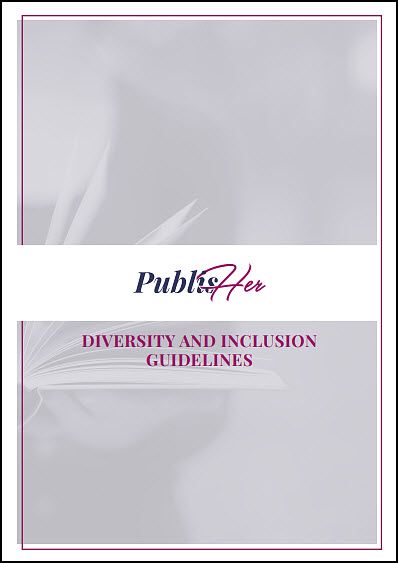 The guidelines include a comprehensive and detailed set of steps to be taken under key categories and subcategories of an articulated platform. We’ll list out the basic outline of the points the document handles. Under each, you’ll many, you’ll find discussion about what’s needed and intended.

Women who are interested in a mentorship session are invited to write to info@womeninpublishing.org