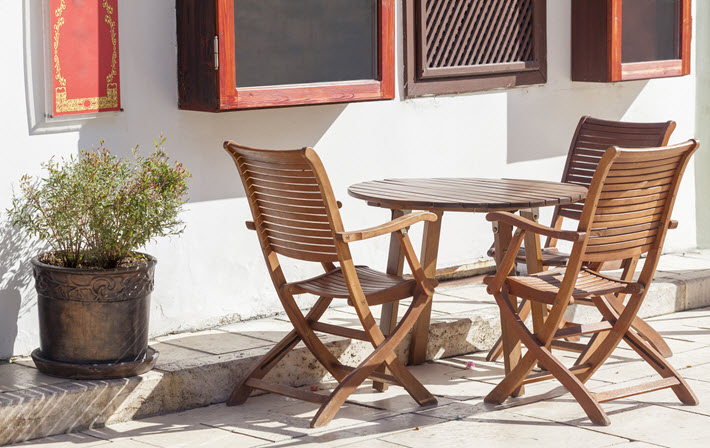 The first event in a new publishing webinar series from HP looks at the ‘super powers’ each of three growing world publishing markets may be able to capitalize on.

The hourlong program was moderated by Publishing Perspectives. It’s part of a series of events sponsored by HP GSB Solutions. Titled “Publishing 2020 Vision,” the series produced by London-based consultant Emma House and it has nine more events running into February. More information on the series is here and at @Publishing_2020 on Twitter. Publishing Perspectives will moderate one more of the events on January 13. That one, like this one, will focus on the “super powers” of several growing markets in world publishing.

In this month’s opening event, the focus was on Mexico, South Africa and China, with speakers:

HP’s Paul Randall introduced the program from London. And in opening comments, each speaker laid out several key points about her or his market, as a basis for the conversation. 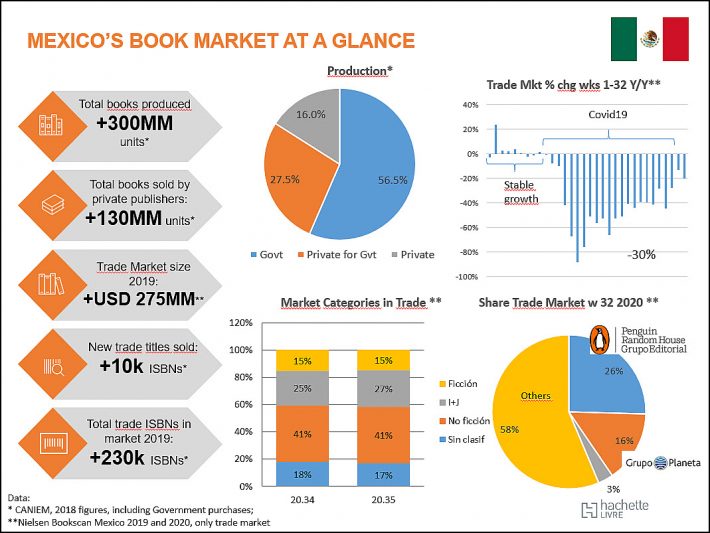 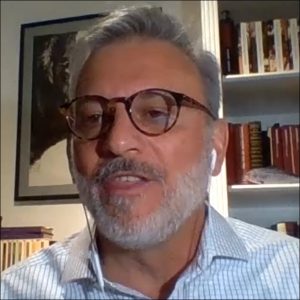 “Ebook readership grew quite a bit in the first months of the pandemic,” Banchik said, “probably by 35 percent over last year. The same happened to audiobooks,” which saw a big 71-percent jump, atop several years of growth.

Banchik also referenced a rise in non-traditional reading and its fans–”Not classic books and not fiction as we’re used to,” he said, “but ‘reading influencers.” These are normally younger people who contact each other through social media. In this area, the Mexican market, he said, is seeing readers who are new, people who may not have done a lot of reading until they were turned on to it by peer-influencers.

“And in addition to English-language books being read more in Latin America,” Banchik said, “one of our biggest trends is in physical books being sold online.”

Digital retail of print, he said, “has grown from 5 percent of sales to more than 20 percent.

“This has virtually revolutionized bookselling in Mexico and Latin America, as books from all over the world in Spanish and English arrive in Mexico through the biggest online channels.”

China: Digital a ‘Distinguished Segment’ of the Market 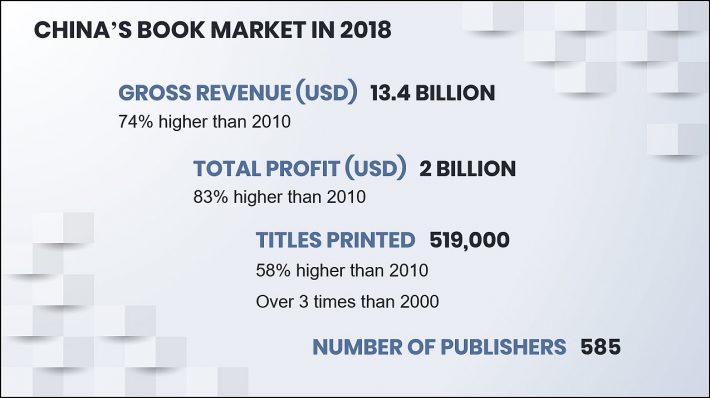 Li pointed out that the in addition to China’s fast economic growth, the “Reform and Open Up” policy of the Xi government, and foreign publishers’ entry into the market, there are anecdotal examples of huge success stories. 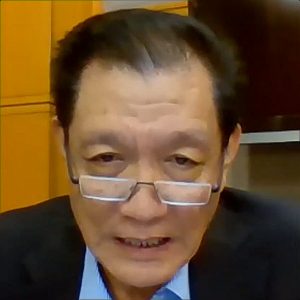 For example, Li mentioned New Standard English, a textbook series from Macmillan Education and the Beijing-based Foreign Language Teaching and Research Press. The series now has sold more than 1 billion copies in China, he said, where learning English is a major goal for many readers.

“In 2018,” Li said, “the gross revenue of China’s digital publishing industry, including ebooks, online education, etc., was US$120 billion, an increase of 18 percent over the previous year.”

And a key to the Chinese population’s comfort in buying books online—not unlike the digital retail push that Banchik is seeing in Mexico—has to do with the longstanding presence in China (and other Asian markets) of “online literature”—those narrative series read by millions, not unlike popular stories on Wattpad.

Li agreed that to some degree, the comfort levels in the Chinese consumer base with online literature make it easier for readers to adapt to ordering print from digital retail platforms.

And at this point, Li and the association count 585 publishers in the Chinese market. From our associates at Beijing OpenBook, who provide data and support for our monthly China bestsellers updates, we know that there are more than 10,000 online and offline bookstores being monitored for sales data.

“Digital publishing is becoming one of the most distinguished segments” of the market Li said. “Education and culture are flourishing together with our publishing industry.” 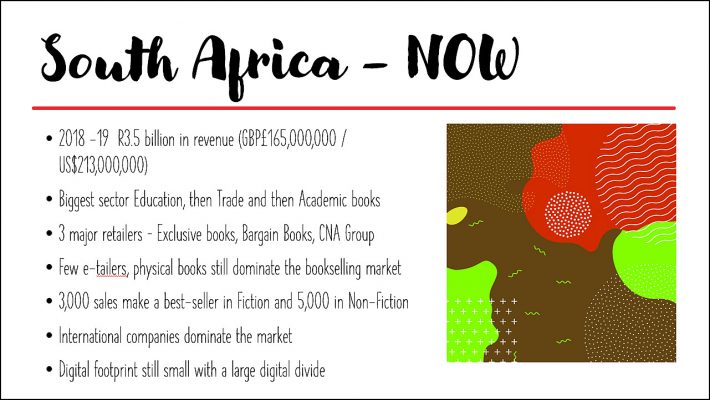 “It’s always important to remember whenever you talk about South Africa,” said Blackbird Books founder Thabiso Mahlape, “just how racially charged everything still is. The socio-economic inheritance of apartheid still plays a very big role in how publishing looks and what publishing is. 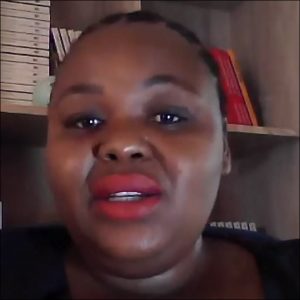 “The three big sectors are education, where everybody’s making a lot of money but losing their hair,” she said with a smile. “Then there’s trade publishing,” which I speak to,” as Blackbirds’ publisher. “And then there’s academic, and they largely keep to themselves.”

In looking at the US$213 million in 2018-2019 revenue in South African publishing, Mahlape said, “a lot of that money goes out of the country, it doesn’t stay here and does not contribute to our economy because, of the Top Five publishing forces here, 60 percent is international” publishing corporations. And, of those remaining companies, the biggest deals are with distribution for international publishers.”

Reading in South Africa remains a relatively exclusive activity, she said, with only some 14 percent of the population reading for pleasure “or having books in their houses. If we sell 3,000 copies of a fiction title, that’s a bestseller for us, 5,000 in nonfiction.

“Like Mexico,” she said, referring to comments from Banchik, “nonfiction is our biggest winner here. People want to read celebrity memoirs—they’re by far the biggest-selling” books, “followed closely by political scandals. And because South African politicians are really dishing it up at the moment, it’s book after book after book.”

“A big part of what’s wrong with our industry is it’s just too many old people. We need to make space for young people.”Thabiso Mahlape, Blackbird Books

Mahlape added that without many digital retailers, “Bookselling still is very physical here. Not everyone in the country has a credit card” or can handle shipping costs for books bought online.

In moving from her company’s original stance as an imprint of Jacana Media to become an independent press, she said, she’s begun to see a generational divide at play. You hear echoes of this in her earlier comments to us from last year’s PublisHer gathering in Nairobi. “A big part of what’s wrong with our industry is it’s just too many old people. We need to make space for young people to come in. And while many things as I’m describing here are depressing, they’re also hopeful because it means we have that much more to build toward.”

Ironically, she noted, even as African readers at the moment want to read African writers, they gravitate to the big names. “And if you’re reading Chimamanda,” she said, “you’re not actually contributing to the African economy,” Ngozi Adichie being a Nigerian author who’s published by Penguin Random House.

After questions and answers with the session audience, the hour concluded with a round robin of speakers on what her or his market’s “super power” is—meaning what’s the feature of that market that can propel it to more prominence in world publishing. Each had an apt answer.

“Mexico has been an export market. It slowed down, but can and will become that again, exporting to the Hispanic Americas.”Roberto Banchik, Penguin Random House Grupo Editorial

For Mexico, Banchik said, “Being the largest Spanish-speaker” in the Americas “is a power the Mexican publishing sector has. It’s the blessing, in a sense, of bordering with the United States, with such a huge Spanish-language population. That’s certainly something Mexico can take advantage of,” not least because of its free-trade agreement with the States.

“Mexico has been an export market,” Banchik said. “It slowed down, but can and will become that again, exporting to the Hispanic Americas.”

For China, “The population and policy of opening up to the outside world,” Li said, referring to the country’s 1.4-billion-person population size, “could be unique strong points.

“The rapid growth of our GDP,” he said, “brings a lot of purchasing power to our people. And the Reform and Open Up policy, he said, encourages more cooperative ventures with international publishers, “so more titles can be published here in the Chinese market.”

And for South Africa: “I went to Frankfurt Book Fair for the first time last year,” Mahlape said. “And when I saw how many white men were there, I realized for the first time that there must be a lot of money in publishing. Because white men don’t go where there’s no money. And I realized that the super power we probably have in South Africa is that on the African continent, we have the most sophisticated publishing system. If we are able to use that to create an interconnectedness in the continent, then we could be one of the biggest (world) markets, as a continent.”

That’s a picture of South Africa as a publishing hub for a consolidated pan-African publishing market. If such a thing could be achieved, Mahlape said, “then we could  create that strong fort of African stories and guard it.”

You can review the session at the Publishing 2020 Vision YouTube page here. 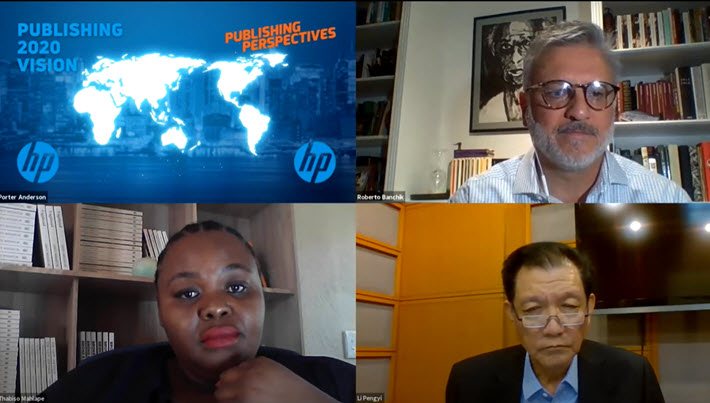 More from Publishing Perspectives on Mexico is here, more from us on China is here, and more on South Africa is here and Africa more broadly is here.