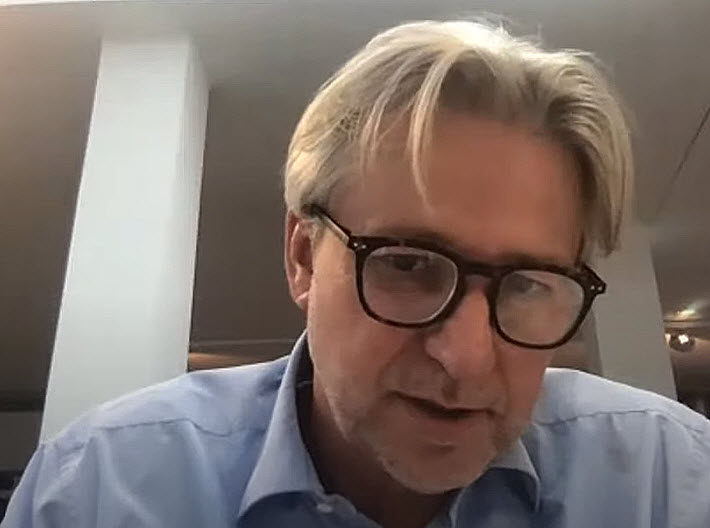 Exhibitors from 40 nations had hoped to be at the physical edition of Frankfurter Buchmesse 2020, Juergen Boos says, but Europe’s COVID-19 numbers have placed the emphasis now on the digital event.

Read our main story on the change in plans here.

‘Like a Book Fair Going on for Eight Months’

In its effort to mount a physical exhibition-hall component for the 2020 Frankfurter Buchmesse’ (October 14 to 18), the world’s largest book-industry trade show had gathered commitments from some 800 exhibitors from some 40 nations, factoring in national collective stands.

This was learned in a brief video conversation today (August 8) with Frankfurt president and CEO Juergen Boos on the news that Frankfurter Buchmesse has had to cancel its physical exhibition for the trade show this year.

While the on-site exhibition hall was always planned to be far smaller than the usual sprawling array of stands in many buildings, the hope was that German and other European exhibitors could still travel to Frankfurt for the event, even as overseas trade visitors watched their chances fade.

The 800-exhibitor figure contrasts sharply, of course, with the 2019 Frankfurt Book Fair’s 7,450 exhibitors from 109 countries. If anything, it helps create a realistic picture of just how difficult the coronavirus COVID-19 pandemic has made it for world publishing to gather for business and collegial exchanges as it’s accustomed to doing. Last year’s fair drew a reported 302,267 visitors, both professional and public, to the fairgrounds.

“So we lost a lot of people,” Boos told Publishing Perspectives publisher Hannah Johnson in his chat, “because they were unable to travel. And it’s a big disappointment for all of those countries. We were really looking forward to having a physical presence,” which had been designed with wide concourses and distanced stands for safety, “and to doing business in a restricted way, but still doing it and exchanging ideas.”

As organizers are stressing today, the exchange of ideas still can go on in the extensive digital interpretation of the show that Frankfurt is developing.

The optimistic side of this development, Boos said, “is that this is not a one-time offer.” Thanks to the “Restart Culture” funding package of some €1 billion (US$1.2 billion) provided in early July by Germany’s ministry of culture from Berlin’s stimulus allocations, he said, the digital developments being created now—including the Frankfurt Rights platform, which opens October 1—will remain available to trade users free of charge at least until summer 2021.

“It’s more like a book fair that’s going on for eight months,” he said in something of an echo of the now-running Beijing International Book Fair.

“And then there’s a new edition of Frankfurter Buchmesse in 2021.”

‘Focusing on What We Do Best’ 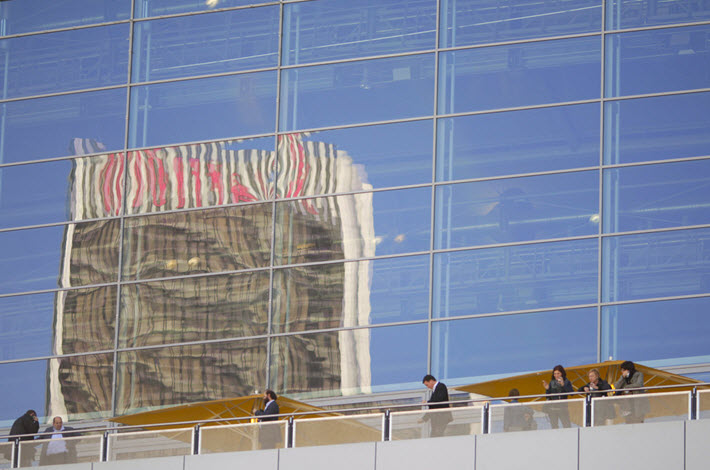 A reflection in the Halle 3 glass overlooking the Agora at Frankfurter Buchmesse. Image: FBM Alexander Heimann

Boos mentioned that Frankfurt, of course, is not only important for the international book trade but also for the book business’ sister creative industries. By talking to professionals working in the field, he said, the team has put together Frankfurt Rights “so that people can actually do their business,” which is not necessarily the experience some parties have had in all other online trading platforms connected with book fairs and trade shows.

“We’ve developed a matchmaking function” for international rights and licensing trade professionals to use in having meetings and working together. “And most important,” he said, “we’ve been focusing on what we do best, which is bringing together people on the business side and also on the readers’ side. And we’ve developed all these tools, as well as the Frankfurt Conference program for the industry.

“I think we’ve created the largest trade portal in the world of publishing.”Juergen Boos, Frankfurter Buchmesse

“I think we’ve created the largest trade portal in the world of publishing. And with a few million euros to invest into this platform,” he said, “that’s not going to go away. It’s going to stay as that year-’round trading component of the show.

“We’ll always have the physical event in Frankfurt—because this is what people really do need, that’s what they’ve told me—but we can also support the business now” through this newly developed digital construct.

Boos also spoke to the increasingly difficult situation in Germany, where alarm is mounting quickly, news reports describing more than 1,898 new infections in the 24 hours prior to today’s Frankfurt announcement—a caseload curve rivaling that not seen since April. While an “R-factor” of 1.12 would sound good to public health officials in some parts of the world, that figure on Tuesday is up from 1.10 on Monday, according to RKL and reported by Bloomberg’s Daniel Schaefer. It’s anticipated that deepening intra-Europe travel will be disrupted and restricted, of course, in coming mitigation efforts.

Having been in touch with health authorities, Boos said, it’s clear that the severe jumps in cases seen in Spain, France, Italy and other markets including the UK are compelling quarantine measures and other constraints—”a lot of issues,” as Boos put it. In talking with his supervisory board, Boos said, they decided that “It was pretty clear we couldn’t go on like this.”

He also points out that few of Frankfurt’s professional trade visitors this year should have a “switchover” hurdle now because even those who were planning to be present for the physical program were also planning to use the digital array “in parallel”—the gateway, as it were, to the international publishing business that could never have been on-site physically.

In developing the digital programming for October, Boos said, he hopes to see the trade show’s usual mix of business and political discussion represented. The German television consortium ARD’s live stage set built into Frankfurt Messe’s Festhalle will be able to produce events with key speakers.

Nevertheless, Boos was quick to concede that as Zoom-savvy as we’ve all had to become during the pandemic, the creative atmosphere of in-person exchange is something not easily reproduced in digital formats. Of all things, he said, “It’s everybody talking at the same time that I miss,” the hubbub of a live event—which at Frankfurt, of course, is famously a roar of business and social conversation.

There may be some chance to hear an evocation of the Frankfurt fray, in fact, in a digital element still under wraps, Boos said. “We’ve also developed some sort of party function”—still a secret for now.

Today’s conversation with Boos is available in a 13-minute recording here.

More from Publishing Perspectives on Frankfurter Buchmesse is here, more from the FBM site on the digital offer at Frankfurt is here, and more from us the coronavirus COVID-19 pandemic and its impact on international book publishing is here and at the CORONAVIRUS tab at the top of each page of our site.