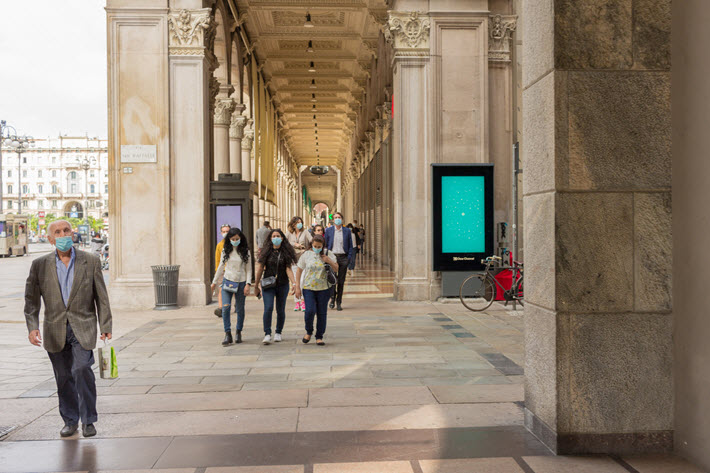 The Association of Italian Publishers expresses support for the Frankfurt Book Fair’s decision to cancel its physical exhibition and cheers funding for small presses.

As Publishing Perspectives readers will recall, the mood in the hard-hit Italian publishing industry was brightened by an announcement that the Giuseppe Conte government would allocate a new €10 million fund (US$11.9 million) for pandemic-endangered piccolo editori, small publishers.

The €3.2 billion (US$3.8 billion) book publishing industry of Italy—Europe’s first epicenter of the coronavirus COVID-19 pandemic—has steadfastly demanded assistance  from a government direly encumbered by the needs of its cratered economy.

In cooperation with its sister creative industries, the Italian book business clamored for months, demanding attention go to the market’s strapped cultural sector.

Having waited until now to see an actual decree from the federal government that would make the €10 million fund a reality, the Italian publishers’ association (Associazione Italiana Editori, AIE) this week has signaled that the order has been published. The Conte government is coming through with July’s agreed response, and instructions now are being laid out for publishers to use in applying for grants.

The AIE’s statement almost jumps off the page with relief.

“With the publication of the decree in support of small publishers,” writes AIE president Ricardo Franco Levi, “an important step has been taken to preserve the richness and diversity of the Italian cultural offer.

“By accepting our proposal, the government and parliament are responding to the needs of an important part of the publishing chain.”

It’s important to note that the success here lies not only in the achievement of funding for the most vulnerable publishing houses but also in the simple fact that the association has been able assert enough pressure to push it through.

And Levi is careful to point out that thinking of this as a done-and-dusted response is incorrect. The help for small presses is only part of a wider, coordinated response that Levi and his colleagues in sister creative industries had designed and promoted.

“An overall support plan for Italian book publishing industry and reading,” Levi says, “has been defined. It largely follows the one desired and proposed by us together with the Italian Library Association (AIB) and the Association of Italian Booksellers (ALI). The €10 million for small publishers is a fundamental piece: the credit must be given to the government and parliament for this.”

And after working so long to get the funding, small presses must now move fast, too.

Applications for assistance from the fund must be submitted by September 21. The program is meant to provide support of as much as 1 percent of turnover for 2019, up to a maximum of €20,000  (US$23,710) for each company applying.

Preference is to go to small houses that are professionally operating in the business and hiring employees–this, of course, to try to ease part of the unemployment fallout in the nation’s overall picture.

Applicants for aid must be registered as Italian businesses and fall under the category of “autonomous micro-enterprise,” meaning companies that employ fewer than 10 employees and/or have a balance sheet not to exceed €2 million (US$2.4 million). Further, those applying must be registered with the Italian chamber of commerce, must have published at least 10 titles in 2019, must be up to date on their tax payments, and be free of any bankruptcy activity.

“Despite signs of recovery” in the broader economy, the staff of the AIE writes, “this measure is an important assist, helping us continue to play our role in the editorial and cultural plurality” of the nation.

A Statement on Frankfurt Guest of Honor Italy 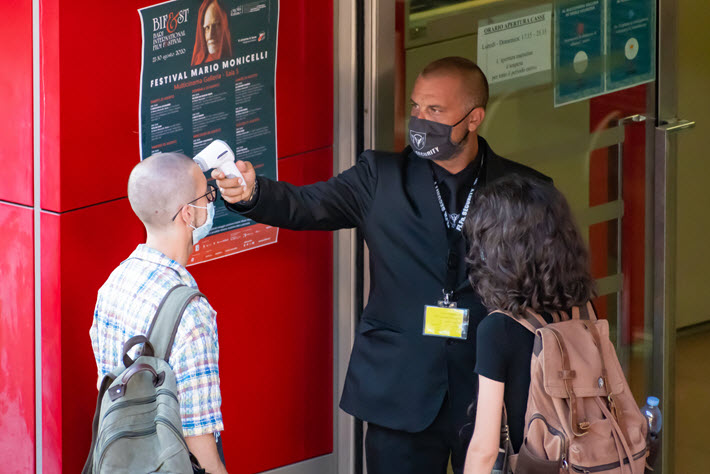 In Bari on August 25, an attendant at a cinema checks the temperatures of filmgoers at the door. Image – iStockphoto: Michele Ursi

In addition to the AIE’s statement on the newly allocated aid for small publisher, there’s also a note provided to Publishing Perspectives relative to Frankfurter Buchmesse’s announcement on Tuesday that it will forgo a physical exhibition hall October 14 to 18, as coronavirus pandemic conditions intensify in Germany and Europe.

“The cancellation of the physical part of the Frankfurt Book Fair for 2020 is a choice that grieves us,” writes Levi, “and that gives us a sense for the breadth of challenges that publishing has faced and still does face this year because of the COVID-19 emergency.

“Our commitment to Italy’s participation as guest of honor in 2024 remains confirmed and indeed reiterated even more strongly, according to the agreements signed with the Frankfurt trade show by our minister for goods and activities and for tourism, Dario Franceschini, agreements that will see our country at the center of interest in European and international publishing and culture.”

“As I said to the president and CEO of Buchmesse, Juergen Boos, when he told me the news, we fully understand the reasons for the decision taken by the organizers.

“We ourselves at AIE have been forced to cancel the 2020 edition of our festival here. With the Frankfurt fair and 17 other trade fairs throughout Europe, we are collaborating in the Aldus Network so that the difficulties of these months may be an opportunity for future growth.

“At the same time,” Levi says, “we are convinced that the part of the Frankfurt event online featuring Frankfurt Rights will be decisive for the exchange of rights between publishers, an activity at the heart of Buchmesse.

“AIE, which has always collaborated on Frankfurt, had organized a collective stand for the promotion of Italian publishing, thanks to extraordinary assistance from the ministry of foreign affairs and international cooperation and the Italian Trade Agency (ICE) in support of internationalization of Italian companies.

“Even though forced to cancel that physical institutional stand and our physical presence, we will not fail to support Frankfurt 2020.” 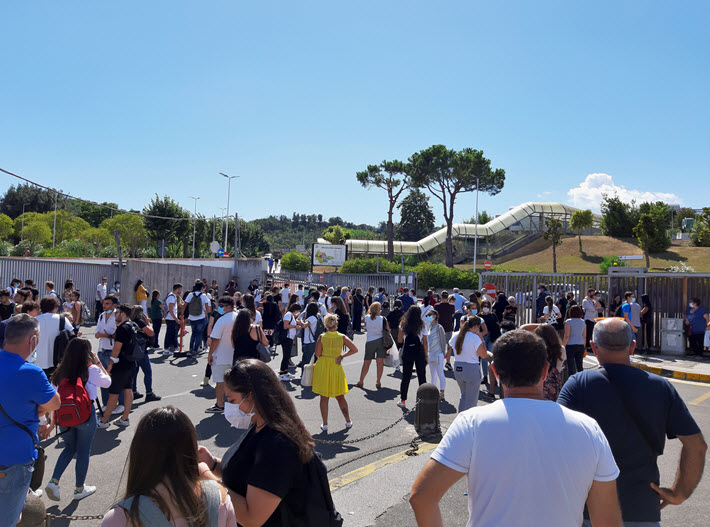 Families wait on September 8 as their students undergo admission testing at Monte before admission to the Federico II University in Monte Sant’Angelo. Image – iStockphoto: Luca Mato