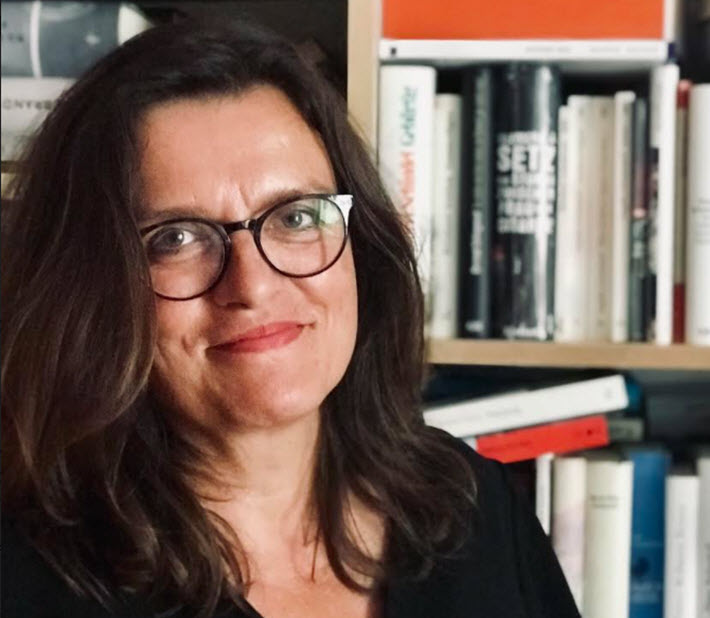 The idea of leveraging YouTube’s reach and viewership for book sales and audience cultivation has understandably been as attractive to publishers, of course, as to any other part of the retail spectrum.

One practitioner in the field, however, concedes that the video pasture may not be as green as once imagined for promoting books. Sabine Kieselbach, the Berlin-based literary correspondent for Deutsche Welle’s arts and culture department, shows a lot of pluck when she tells Publishing Perspectives, “Unfortunately, we have found that it’s not easy to reach literature enthusiasts on YouTube.

“But we want to continue. We are currently trying to get more attention through the other social media platforms of Deutsche Welle: Facebook, Instagram, and Twitter, for example.”

Have a look at the international news network’s “DW Books” YouTube channel. This is not your daughter’s YouTube channel. Mercifully, you’ll find no dancing cookies and tea here, as you once may have spotted on a UK-based book-promotion effort. It’s not about coziness or Teddy bears or flowered bedspreads.

It’s actually about books, and it’s for adults. The videos are professionally produced and track the trends in news.

Another feature that makes this site particularly relevant to the interests of our internationalist stance and readership here at Publishing Perspectives is called “Read the World“—a phrase used by the translation imprint AmazonCrossing, as well—with coverage from Indonesia, Norway, Georgia, the Netherlands, France, and the Czech Republic.

All is in English. And the range of players and topics is bracing, in and of itself. Ivana Sajko talks about “the dark history” of Croatia. Zimbabwe’s Tstisi Dangarembga discusses her arrest. Victor Martinovich looks at the protests in his native Belarus.

Deutsche Welle operates in a role akin to that of the BBC World Service, receiving public funding and functioning as a journalistic callout to the world. Its DW Books channel has just reached its first year this month.

“With the channel, we want to attract book and literature enthusiasts in various formats,” Kieselbach says.”

She and the network’s team produce longer pieces of up to 30 minutes as well as shorter portraits of authors, book presentations on current and popular issues, literary portraits of countries, interviews with authors about their current books or the political situations in their countries. Many videos can be seen in under 10 minutes each—good for a break at work.

“Last but not least we have our now-complete series “100 German Must-Reads,” Kieselbach says. “At the beginning of the coronavirus COVID-19 pandemic, we conducted a month of daily interviews with authors from many parts of the world, and asked them about their experiences, their personal situations, their fears, and hopes.

“And later this month, we’ll launch a new format: well-known ‘bookstagrammers’ or booktubers will present current books. Another format is also in production: well-known cultural workers—writers, filmmakers, artists—tell about their most important reading.”

While we have to hope the booktubers don’t arrive with their Teddy bears and bedspreads, the DW Books effort is obviously robust and looking for expansion—a place for publishers to watch.

Operating as it does to journalistic standards, Deutsche Welle’s DW Books follows news patterns and is not sponsored content. What’s presented is chosen and produced by the network. Publishers are not paying to have their titles highlighted. Kieselbach does tell us, however, that a publishing house with a suggestion (and which publishing house doesn’t have a suggestion?) can contact books@dw.com.

Most of the videos you’ll see at DW Books are also shown at times as part of the network’s television programming, which gives those features a wider viewership than they may have on YouTube.

Generally, you’ll find new video arriving at DW Books one to three times per week, Kieselbach says, and of course the pace picks up when something particularly timely is at hand, such as the ongoing election protests in Belarus. In that case, the writer Victor Martinovich is on the page, talking about the situation in Minsk.

All told, DW Books is performing a service for those who enjoy video and books but aren’t quite as impressed with the celebrity and happy talk of other book-related YouTube channels, in particular those for younger readers. That’s not to say that appealing to young readers is wrong—quite the opposite—but that it’s good to see a dedicated effort for more seriously engaged current-affairs and contemporary fiction readers produced with a strong journalistic filter.