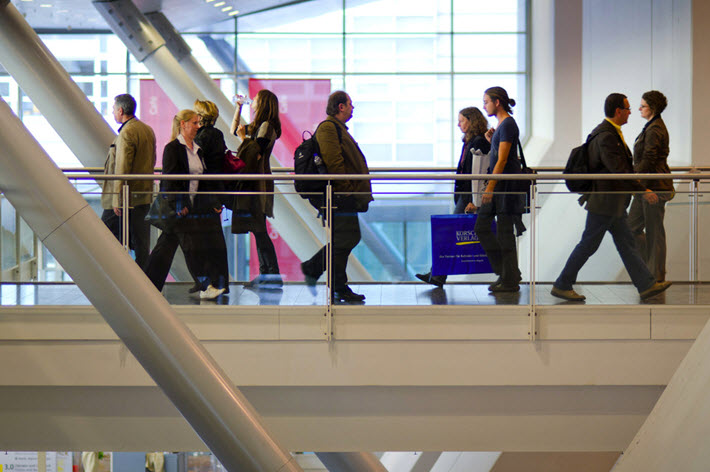 With Germany and Europe facing elevated COVID-19 numbers, travel restrictions prevent a physical exhibition at the Frankfurter Buchmesse this year, as the trade show focuses on its digital offer.

At Frankfurter Buchmesse in its customary setting at Frankfurt Messe. The 2020 edition will have to forgo the anticipated physical exhibition component, as movement in Europe becomes more restricted amid COVID-19 responses. Image: FBM, Peter Hirth

Having hoped to produce a smaller and carefully designed floor for those exhibitors who could get to Frankfurt for the trade show, October 14 to 18, Frankfurter Buchmesse’s organizers today (September 8) are announcing that there will be no “traditional on-site exhibition” at the fairground this year. The television-production stage being installed in the complex’s Festhalle, however, is scheduled to go forward with an extensive program of live events.

The key change is that as the European continent experiences a rash of late-summer surges in coronavirus COVID-19 cases, Germany and other European Union markets are having to place new curbs on travel.

Because of “current travel restrictions,” organizers write in their media messaging this morning, “numerous national stands cannot be implemented as planned.

“The quarantine requirements that will be enforced on 1 October 2020 make it nearly impossible for European exhibitors and trade visitors to participate.”

Needless to say, this is disappointing not only for many of the Frankfurt team but also for exhibitors and other professionals who had hoped that the pandemic in Europe would allow them to travel and engage in a distanced physical exhibition format complemented by the digital evocation of the show. But, as Daniel Schaefer is reporting this morning for Bloomberg, “Germany’s new coronavirus cases increased at the highest pace since April as the nation’s public health authority warned that the situation continued to be ‘dynamic and serious.'”

According to the 4:28 a.m. ET update (0828 GMT) of the Johns Hopkins Coronavirus Resource Center, Berlin has recorded 1,898 new infections in 24 hours, Monday to Tuesday morning, taking the total to 253,630 in a population of 83 million, with 9,334 deaths on record. Ironically, Frederik Pleitgen and Tara John write for CNN, protests of anti-COVID measures have made experts worry that Germany’s initial coronavirus success allowed “for the spread of coronavirus skepticism.”

Boos, president and CEO of Buchmesse, says, “We would like to thank all exhibitors for their motivation and trust in getting the Frankfurt Book Fair 2020 on its feet, too.

“Now the focus is on our virtual offer and the events in the festival hall and in the city. In the last few months we have expanded our numerous, already existing services into a coherent digital overall concept. International publishing professionals meet well-known and new digital formats with which they can advance their business even in times of coronavirus. And the reading public has the opportunity to live out their enthusiasm for books in two ways – both on the Internet and at local events. ”

Speaking for the German Book Trade Association, Karin Schmidt-Friderichs says, “Frankfurter Buchmesse is not only the largest book fair in the world, it’s also a company that’s constantly evolving. Lively, agile and adaptable.

“In the current situation, this means that there are no stands in halls because of the increasing coronavirus restrictions. This year, events in Frankfurt am Main and other cities will make book enthusiasm tangible both live on-site and digitally and accessible at any time.

“We’d like to thank the federal and state government, in particular the minister of state for culture Monika Grütters, the Hessian prime minister Volker Bouffier and the Hessian minister of economic affairs Tarek Al-Wazir for their continued support.”

A Focus on Digital Events and Offerings

While the physical exhibition has taken a setback, the trade show is emphasizing the consumer-focused program of more than 80 BookFest events will take place, both physically in the city and as part of the digital programming, as well as the the ARD stage program at the Festhalle.

In addition, Frankfurt is highlighting, of course, its core Frankfurt Rights platform for the international rights and licensing trade, available starting October 1 with catalogues, business contacts, messaging among colleague and trading partners, content samples, and support for trading in interest not only in books but in film production development, audiobooks, and more.

ARD is the consortium of public-service broadcasters from various parts of Germany, and it’s planning to air content from the fair to its viewers, with streaming capability, of course, for the digital evocation of the trade show. Additional broadcasters participating are ZDF, 3sat, ARTE, Deutsche Welle, and Deutschlandfunk. Media partners are to include Frankfurter Allgemeine Zeitung and Der Spiegel.

And more details will be available shortly on the various components of the digital iteration of Frankfurter Buchmesse.

Germany, it should be noted, is hardly alone in facing an alarming upturn in the contagion’s prevalence. As Matt Bradley and Nancy Ing report from Paris for  NBC News, France, Spain, and the UK are showing particularly robust COVID-19 surges. In many markets, efforts to re-open schools and universities are complicating public health programs’ efforts to contain the pathogen’s spread.

What’s more, Raf Casert reports for the Associated Press, the pandemic has handed Europe its leanest tourist season. “The upheaval so far, the bloc’s executive European Commission said, shows that ‘revenue losses during the first half of 2020 for hotels, restaurants, tour operators, long distance train operators and airlines were roughly 85 to 90 percent.” No country has been exempt in an area spanning from Greece’s beaches to the trattorias in Rome and the museums of Paris.”

More from Publishing Perspectives on Frankfurter Buchmesse is here, and more from us the coronavirus COVID-19 pandemic and its impact on international book publishing is here and at the CORONAVIRUS tab at the top of each page of our site.