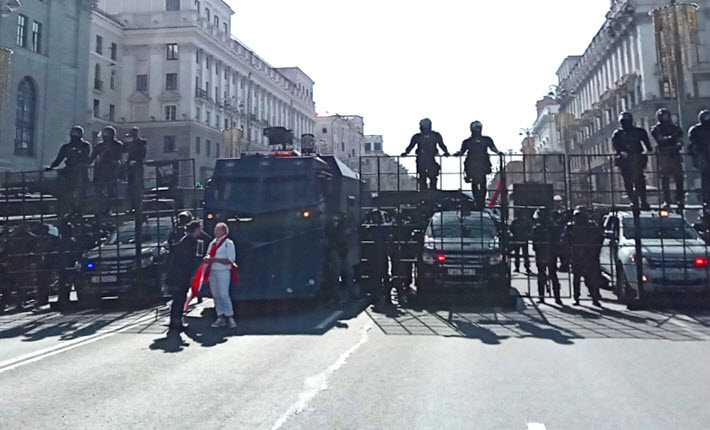 The Society of Authors calls on the British government to pressure the Lukashenko regime on behalf of the Union of Belarus Writers. 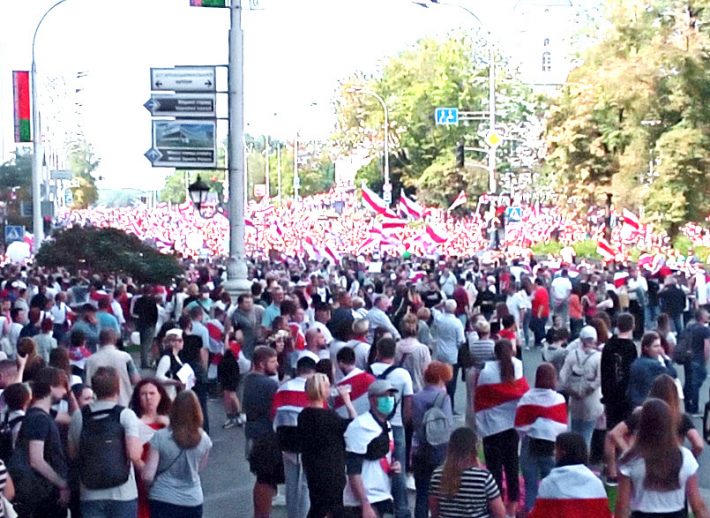 A demonstration in Minsk against the August 9 Lukashenko election results. Image: UBW, special to Publishing Perspectives

Solomon: Several Writers ‘Are in Prison for Their Writing’

Iin a strongly worded weekend letter to the United Kingdom’s foreign secretary, Dominic Raab, the Society of Authors‘ CEO Nicola Solomon has called for intervention in the Belarusian crisis.

“Several Union of Belarus Writers members are in prison for their writing,” Solomon writes. “Last week, Svetlana Alexievich was called for questioning but has subsequently been released, due, no doubt, to international pressure.” As Publishing Perspectives has reported, Alexievich, the 2015 Nobel Prize in Literature winner, was indeed called by the state Investigative Committee to testify, but has declined.

In her letter, Solomon speaks for the 11,300-member trade union about the concern shared by many in the world industry for members of the Union of Belarus Writers. Both the Society of Authors in London and the Belarus union are member-organizations of the European Writers’ Council, which is coordinating international pressure on the Lukashenko government on behalf of writers and other creative artists amid ongoing protests to the August 9 election.

And as the CBC is reporting today (September 1) with wire support from Reuters, protests continue unabated. Thousands of Belarusian students have boycotted their first day of school to protest Alexander Lukashenko’s beleaguered government and the election the president’s critics say was rigged. Security forces in virus-protective masks have been reported to have moved against some of the students, apparently taking them into custody.

Stephanie Nebehay writes for Reuters that as many as 6,700 people have been detained during the weeks of protests, prompting new objections from United Nations specialists.

“I would ask you,” Solomon writes to Raab, “to publicly condemn the violence and repression in Belarus and to ensure that the UK plays its part in raising awareness of the plight of Belarusian citizens in your discussions with foreign ministers, as part of the UK’s ongoing diplomatic missions to the Council of Europe, the OSCE, UNESCO, the United Nations, and elsewhere.

“I would also ask that the UK continue to apply pressure on the Belarusian regime for the release of all citizens unlawfully arrested during its 2020 presidential election campaign and the holding of free and fair elections under international observation.”

From Solomon’s letter, we also get some background on the Union of Belarus Writers (UBW). Created in 1934—50 years after the Society of Authors was established—the Belarus union has some 470 members in a country with a population of 9.5 million. Nobel laureate Alexievich is a member of the union.

“We were lucky enough,” Solomon writes, “to be able to celebrate a translation by Bela Shayevich of Svetlana Alexievich’s incredible Second-Hand-Time (Fitzcarraldo Editions, 2016) when we awarded it our inaugural First Translation Prize”

And she points out that in 2002, “The UBW was prevented from publishing periodicals it had previously distributed. All the editorial staff disloyal to the authorities were sacked. The organization used to have its own building but in 2006 it was forcibly removed, and its Writers’ House was given to a state writers’ union. The ministry of justice subsequently brought a case against the UBW to shut it down, a case the UBW won.” 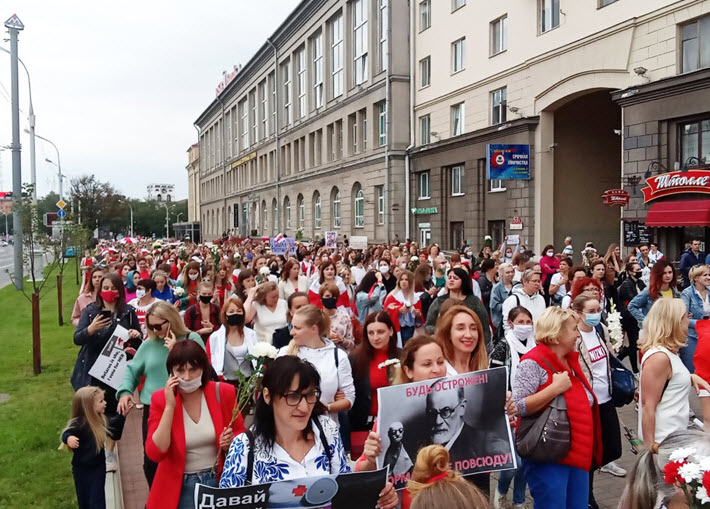 One close observer of the huge demonstrations in Belarus notes that women are typically in the lead because “women are safer demonstrating than men.” In many cases, this source says, security forces may be more hesitant to attack a “wall of women” than they’d be if the protesters were male.

And all writers of Belarus, Solomon tells Raab, “are subject to state censorship. If an author’s name appears on a state-sanctioned blacklist or ‘graylist,’ it will very often not be published and it becomes virtually impossible to reach an audience, irrespective of whether the work is political.

“Some UBW members’ works have been withdrawn from school textbooks following determinations by the state about the authors’ political views. It remains possible to pay privately to have your works printed, but they will not be sold in bookshops, all of which are state-run.

“As a Belarusian author, you cannot give a reading on any state-owned property if your work is black- or graylisted, nor will you be able to work in a state-controlled job. The Belarusian language itself is suppressed, with only 15 percent of students now taught it in school, and no universities teaching in the language.”

“From the UK, looking back across to Belarus, seeing how the liberties we take for granted here are so often denied, we feel humbled.”Nicola Solomon, Society of Authors

And new facts about the early-August election being protested daily continue to come out. Kostya Manenkov and Daria Litvinova report today for the Associated Press that “Even before the August 9 presidential election in Belarus ended, a poll worker in Minsk said she was asked to sign a document summing up its result, with the vote totals left blank. Another worker who pointed out violations during the vote-counting was fired on the spot.”

In conclusion, the Society of Authors’ letter calls on Raab to allow the society “to engage in a constructive dialogue about these and ongoing matters affecting authors and the free expression of their work.”

And in a brief but affecting part of her new letter, Solomon talks of making a trip to Minsk in June 2018, as part of a European Writers’ Council delegation.

“While the Society of Authors’ principal public policy concerns relate, for example, to fair copyright and contract provisions for our members, it was a chastening experience to spend time in a country in which concerns abound about the most fundamental of freedoms, and in recent weeks our concerns have increased.

“From the UK, looking back across to Belarus, seeing how the liberties we take for granted here are so often denied, we feel humbled.”

More from Publishing Perspectives on freedom of expression is here and more from us on the freedom to publish is here. Our coverage of Belarus is here.