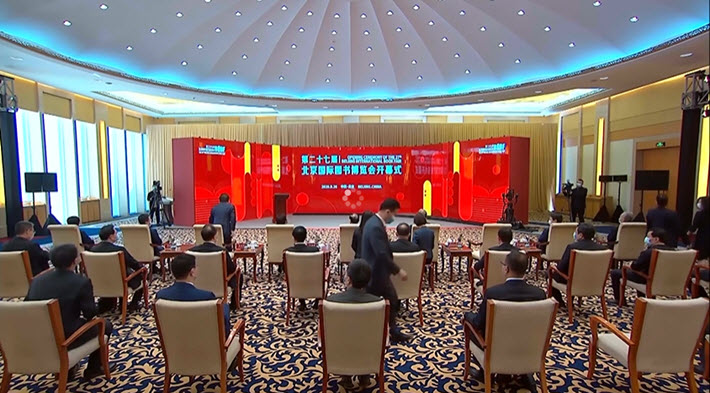 The opening ceremony of the 2020 Beijing International Book Fair was a physical event with masked participants and distanced seating. Image: BIBF video

Having held a five-day professional program that included three regional “matchmaking roundtables,” the Beijing International Book Fair today (September 30) has announced that the “Smart Rights Link,” as this show’s digital rights-trading facility is called, has been a major success.

On September 1, as the program was moving into action, the fair reported having 1,000 exhibitors from 68 markets uploading at least 23,000 titles to an online catalogue service.

Today, the program’s media messaging indicates that “nearly 1,400” exhibitors from 97 countries and regions completed the online registration. Publishing Perspectives is told that this pool of 1,400 exhibitors uploaded “nearly 38,000 books” to the Rights Link platform since the fair had its quiet opening in August, “giving them the chance to present their titles, network and enter into negotiations with overseas publishers.”

Of those exhibitors, 200 were new, organizers say, and 25 of them were among what the fair refers to as “the world’s top 50 publishers,” although it’s not revealed which 25 publishers are so designated as “top” presses, nor is it explained whose listing is used nor on what criteria they may be listed. The United Kingdom, which organizers say is typically the most heavily represented non-Chinese market at the fair, had 40 publishers registered and uploaded 1,000 titles even.

“This has been a unique experiment in marrying the best of  the physical fair with world-beating online technologies, enabling us to offer a holistic, year-round fair.”Liying Lin, BIBF

The Smart Rights link is to remain operative and available free of charge to participants until December 31 of 2020.

Cuba was the guest of honor for 2020, and the Beijing fair organizers say the choice marked the 60th anniversary of diplomatic relations between Cuba and China. The José Martí Publishing House and Oriente Publishing House were two of 21 Cuban presses said to have engaged with the program.

Much of the five-day professional program, we understand from organizers, “was aimed at a Chinese audience” and included a publishing conference, panel discussions, and other events, adding up to “more than 700 on-site or online activities. A workshop on comparative studies of world canals was part of the offerings, and included contributions from companies in Canada, the United Kingdom, France, Belgium, and China. This was timed to support the publication of a series of books on world canals, from China’s Phoenix Media.

The Beijing organizers say there were 6,788 copyright trade agreements made during the events, although these are said to include “intentions”—meaning that it’s unknown how many actual deals may have been closed. This way in which the fair annually announces a count of its trading action, however, represents a 13.2-percent increase, organizers say, presumably over last year’s tally.

‘A Difficult Year for Everyone’ 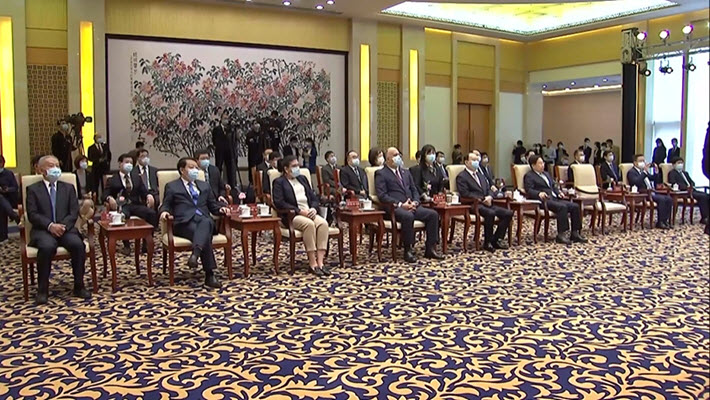 Longtime Beijing International Book Fair director Liying Lin, in a prepared statement is quoted saying, “This has been a unique experiment in marrying the best of  the physical fair with world-beating online technologies, enabling us to offer a holistic, year-round fair. 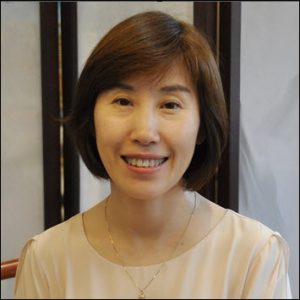 “We’ve used virtual reality, augmented reality, and other technologies to create superb panoramic exhibitions in which visitors can enter the real-life exhibition hall to take part in activities without leaving home.

“We’ve also made full use of network interconnection to create an ecosystem [for] the entire publishing industry. We’ve used all these new technologies for effective international cooperation and exchange, bringing a true transformation to BIBF and the way it interacts with its audience.”

As we see happening in several trade-show settings, the experience of the digital alternative seems to be prompting the Beijing show to adopt elements going forward, at least in current plans. “In future,” Lin says, “BIBF will make full use of offline and online opportunities to form a new diversified, innovative, and versatile ecosystem

“It has been a difficult year for everyone in the publishing industry,” she says, “but we have been buoyed by the success of BIBF online and the transactions done as a result.

“Business in China is virtually back to normal,” she asserts. “Publishers are meeting face-to-face once more. But we know that this isn’t the case for the majority of our exhibitors. We are therefore pleased to have provided this service at such a difficult time.” 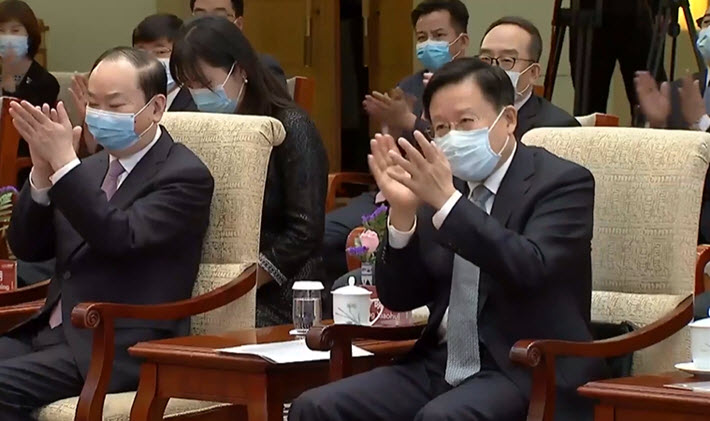