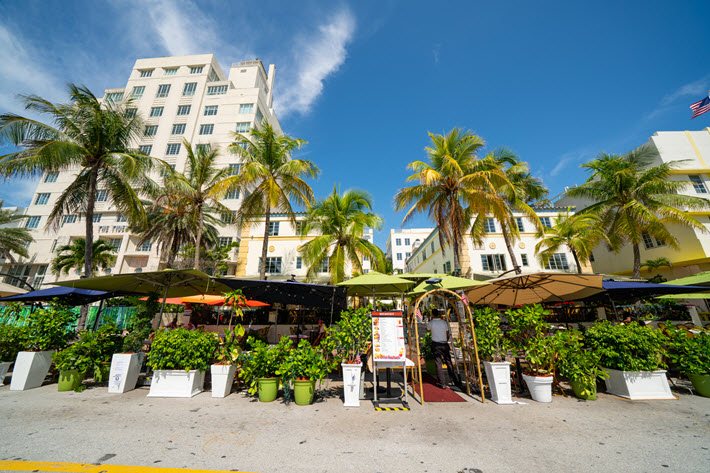 The pandemic summer continues to produce strong book sales results for most segments of the US publishing market, in StatShot figures from the Association of American Publishers.

A deserted Ocean Drive in Mami Beach on July 16. Three counties of Florida—Miami-Dade, Broward, and Palm Beach—have formed the epicenter of the pandemic in the state, which has a population of 21.4 million. On Wednesday (September 9), Florida surpassed 12,000 deaths and today (September 10) reports 654,731 cases, according to the state department of health data. Image – iStockphoto: Felix Mizioznikov

Parts of the United States’ publishing industry continue to show heartening resilience in the face of the coronavirus COVID-19 pandemic per today’s release of the July 2020 StatShot report from the Association of American Publishers (AAP).

The most popular headline from the July report is sure to be that the industry’s trade sector (meaning books marketed to consumers) was up 17.9 percent year-over-year. 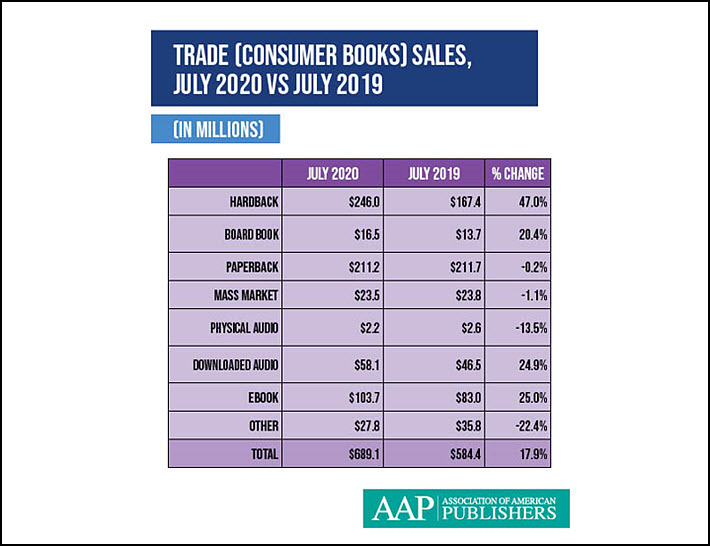 Looking past print data, notice that in the July-over-July comparison, ebooks soared 25 percent, coming to $103.7 million in July 2020.

The team at AAP calls to our attention that ebook revenues in children’s and YA—frequently considered far less salable categories for digital reading—jumped 76.4 percent in July, reaching $11.6 million. Year-to-date, those ebooks for children and young adults rose 63.3 percent in the first seven months of the year over the same period in 2019, revenues reaching $73.2 million.

In a discussion of growing importance, this gives fuel to the question of how much acceleration of digital adoption has been driven by the conditions of the pandemic? Are there former print readers who reached for these glow-in-the-dark reads this summer, only to discover that they like digital reading more than they expected?

In downloadable audio, remember that the category has been on a tear since 2012, although in July it still comprised only 8.4 percent of the overall market’s formats. Its growth numbers are less eye-opening than those of ebooks, but audio has been moving at a fast clip for years. In July 2020, downloaded audio rose 24.9 percent over July 2019, coming to $58.1 million. Year-to-date, downloaded audio was up 15.6 percent over the same seven months of 2019, at $374.7 million.

All roads through the pandemic summer, of course, didn’t lead to the July gains that the trade categories saw. 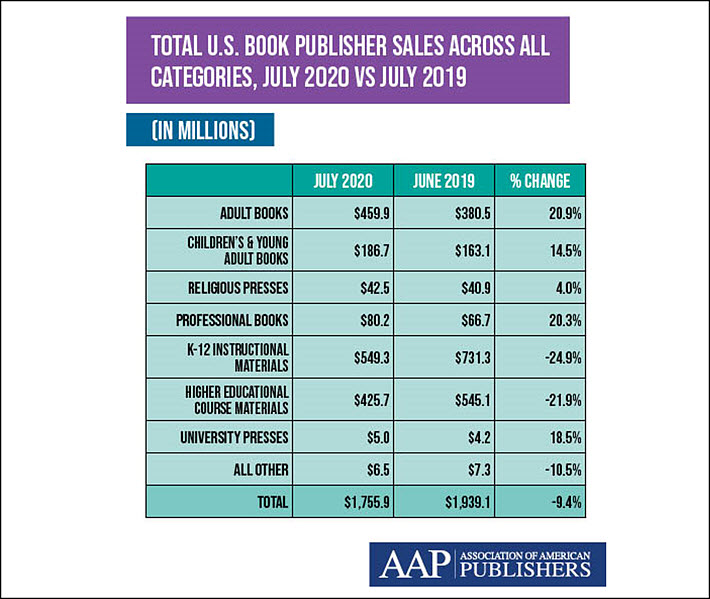 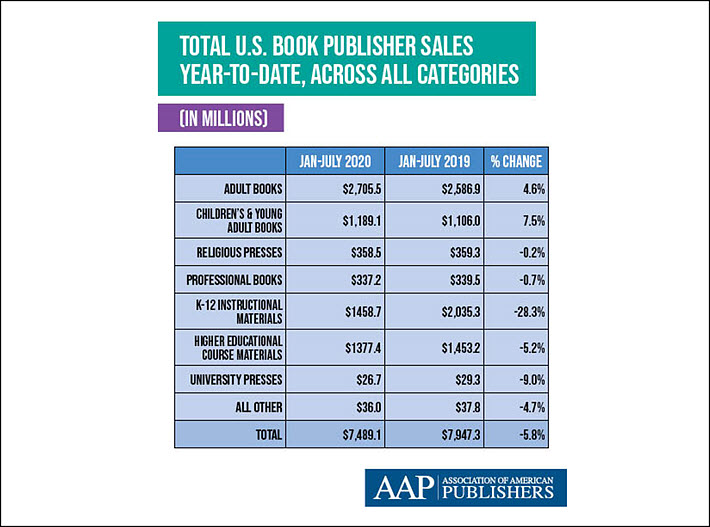 And here’s a look at the percentages of the July 2020 StatShot report’s results, which we referenced earlier in terms of the 8.4 percent of the market represented by downloaded audio. 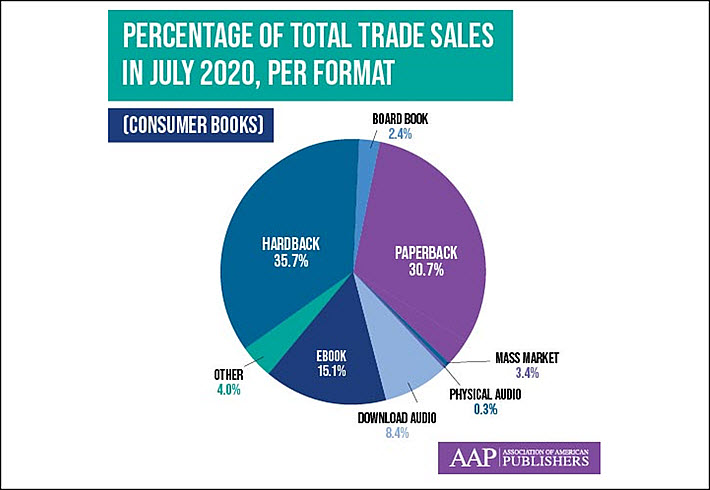 Religious presses, the AAP team reports, saw revenues up 4.0 percent in July of this year over July 2019, at $42.5 million. On a year-to-date basis, the religious press revenues were flat, showing a decline of 0.2 percent and revenues of $358.5 million for the first seven months of the year.

And in terms of educational areas 0f the industry, year-to-date revenues were down 18.7 percent, at $2.84 billion.

The Pandemic and Debate in the States

The biggest news story relative to the virus at this writing centers on revelations in Bob Woodward’s forthcoming Rage (Simon & Schuster, September 15) in which Donald Trump admits to Woodward in taped conversations  that in early February he knew that the coronavirus was spreading by airborne transmission and was deadly.

Instead of informing the American public—or creating a national plan to try to save lives—he concedes to Woodward that he downplayed these facts because, he says, “I didn’t want to create a panic.”

Publishing Perspectives has obtained a copy of Rage prior to its publication.

From the book, part of Woodward’s account of a February 7 call at 9 p.m. from Trump: 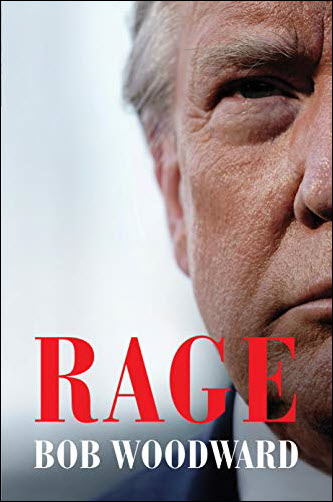 “‘It goes through the air,’ Trump said. ‘That’s always tougher than the touch. You don’t have to touch things. Right? But in the air, you just breathe the air and that’s how it’s passed. And so that’s a very tricky one. That’s a very delicate one. It’s also more deadly than even your strenuous flus.’ …

“I’d heard no one calling for any change in Americans’ behavior other than not traveling to China. Americans went about their daily lives, including more than 60 million who traveled by air domestically that month.

“In our call, Trump had surprising detail about the virus.

“Trump continued, ‘Pretty amazing. This is more deadly’ than the flu, maybe five times more so.

“‘This is deadly stuff,’ Trump repeated.”

About the StatShot Report

From the association, these disclaimers are always worth reviewing.

“Publisher net revenue, including sales to bookstores, wholesalers, direct to consumer, online retailers, etc., is tracked monthly by the Association of American Publishers (AAP) and includes revenue from about 1,360 publishers, with participation subject to change over time.

“It is not, however, possible to make apples-to-apples comparisons to StatShot reports issued in previous years because:

“The number of StatShot participants fluctuates over time, with the pool of participants growing or shrinking in each report

“It is a common accounting practices for businesses, including publishers, to restate revenue numbers based on updated information. If, for example, a business learns that its revenues were greater in a given year than its reports indicated, it will restate the revenues in subsequent reports, providing information that is more up-to-date and accurate.”

In other words, revisions are not unusual.

More from Publishing Perspectives on industry statistics is here. And more on the Association of American Publishers is here. More from us on the coronavirus COVID-19 pandemic and its impact on international book publishing is here and at the CORONAVIRUS tab at the top of each page of our site.