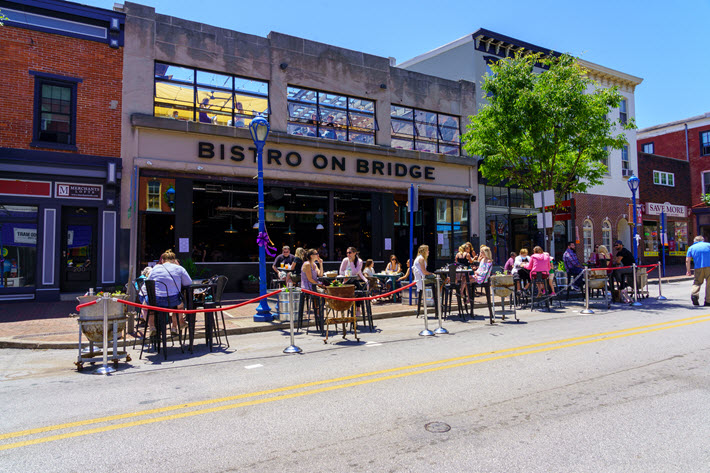 In the AAP’s StatShot for June and NPD’s report on the first week of August, US book sales show resilience in the coronavirus pandemic.

Two Views of the Market

Two sets of US book sales analysis have met up today (August 18) in the weekly observations of Kristen McLean at NPD Books and the monthly StatShot assessments released by the Association of American Publishers.

The StatShot report approved for publication today is for the month of June.

The NPD Group’s print sales report is for the week ending August 8, and thus is much closer to real time.

What will be interesting to see is whether StatShot’s next two monthly reports reflect, or don’t, the NPD team’s observations that the American publishing industry is not only recovering but gaining on its performance last year.

NPD Books: ‘A Barn-Burner of a Week’ 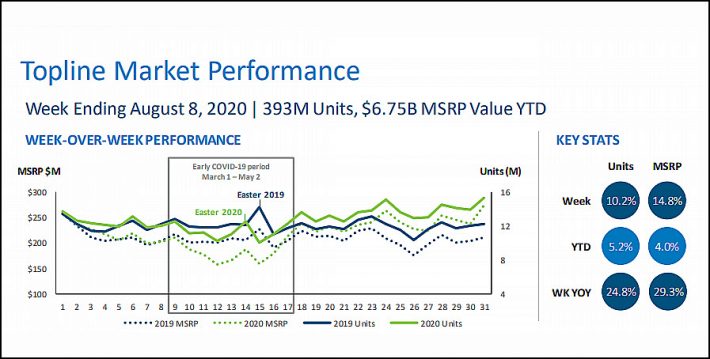 Image: The NPD Group / NPD BookScan, through August 8, 2020, US print sales only

McLean writes in her print sales report that she’s looking at “16 weeks of steady growth” in the American market, “taking year-to-date up to 5.2 percent on a unit basis and completely erasing the losses when store closures and COVID-19 lockdowns were in full effect.”

Here’s a line that encapsulates the remarkable strides the market is making: “The industry is now ahead of its previous high for the week ending January 25.” It’s worth stopping to take that in.

While many book markets in the world publishing industry are struggling to regain their footing after taking devastating hits during coronavirus COVID-19 pandemic spread-mitigation efforts, the United States’ market has recouped losses from its relatively short lockdown periods and is ahead of where it was before the crisis. 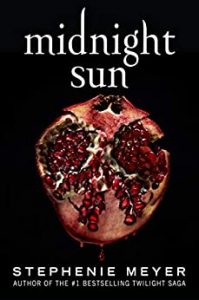 What has made the week ending August 8 such a “barn-burner,” she reports, is a jump of 1.4 million units week-over-week—more than one-third of them going to Stephanie Meyers’ Midnight Sun, released by Hachette’s Little, Brown and Company Books for Young Readers on August 4. Bella and Edward’s love story is told in this, Book 5 of the Twilight series, from the vampire’s point of view. Some series, it seems, may live even longer than the undead.

McLean is adding a trend line for YA fiction as that category’s growth surges, driven, as she says, by Meyers’ new entry and Suzanne Collins’ latest, The Ballad of Songbirds and Snakes, a May 19 release from Scholastic in the Hunger Games series, which also shows vampiric stamina.

The Top 10 bestsellers from NPD in the week ending August 8 showed Midnight Sun at No. 1 and The Ballad of Songbirds and Snakes at No. 10.

In her discussion, McLean writes, “All of our super-categories saw growth this week, including adult nonfiction, the largest super-category, which is finally back in positive territory.

“This growth is built on another strong week in politics books, as well as brisk trade in civil rights and discrimination titles.”

And in that regard, McLean points out, she sees the energy of early August continuing into the autumn as more politics books come into the channels, notably Michael Cohen’s lengthily subtitled Disloyal: The Inside Story of the Real President Trump, by His Former Attorney And Personal Advisor—The Man Who Helped Get Him Into the Oval Office set for a September 8 release and Bob Woodward’s new Rage, scheduled for a week later, both from Simon & Schuster. 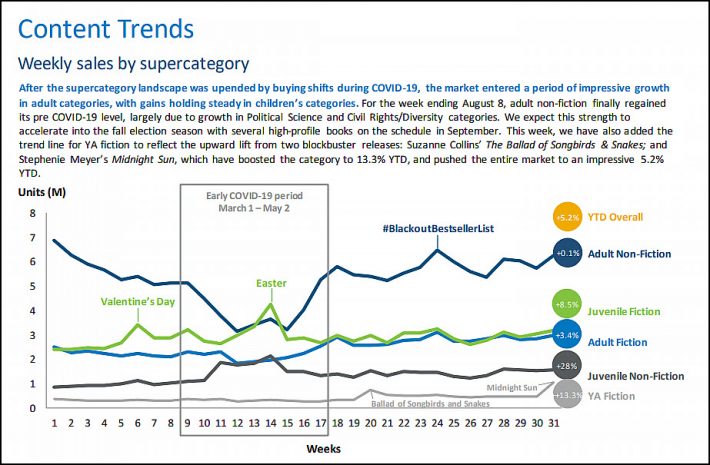 Total revenues across all categories for June 2020 came to approximately US$1.4 billion, which is a decline of 4.1 percent as compared to the previous year, June 2019.

Year-to-date sales were $5.7 billion, a decline of 4.2 percent as compared to the same period last year. 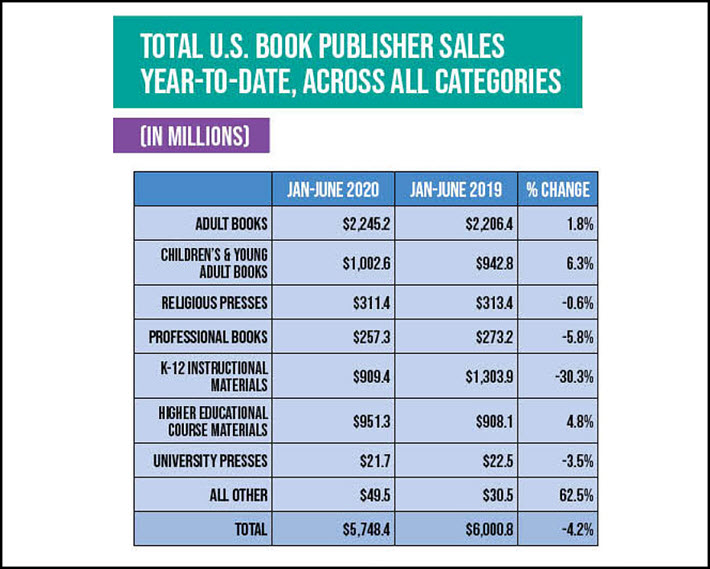 In format-specific data for the trade:

In the year-to-date comparison compared to the same time frame in 2019:

It’s interesting that the AAP StatShot sees ebook and downloaded audio revenues strong again in June and on a year-to-date basis, adding another piece, perhaps, to a growing jigsaw puzzle about what some think, may be a pandemic-accelerated level of digital adoption by consumers.

Since 2012, the AAP points out, downloaded audio has seen continuous monthly growth. As always, however, it’s interesting to note that the format in June accounted for 7.7 percent of the overall market, with ebooks at 15.7 percent. 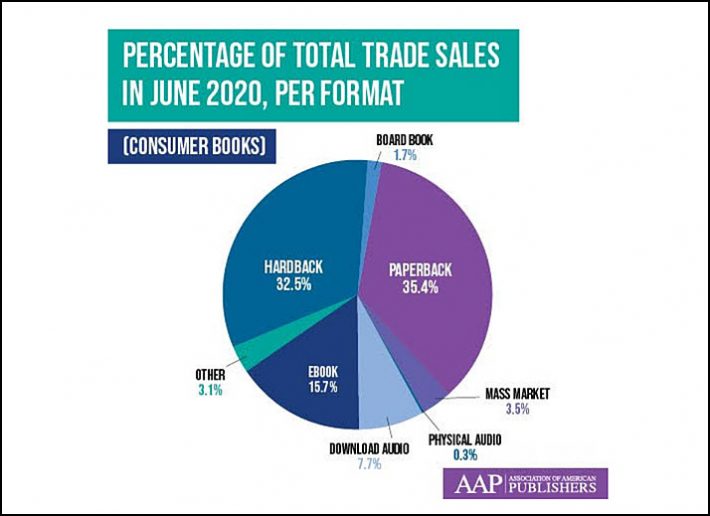 In religious presses, the StatShot report sees revenues up 50.0 percent year-over-year in June, coming in at $51.8 million, but roughly flat on a year-to-date basis with a decline of 0.6 percent, with revenues of $311.4 million for the first six months of the year.

Education, of course, remains a heavily embattled sector in publishing, something exacerbated by the pandemic-driven upheaval in normal schoolyear activities and scheduling—something we can expect will come even more heavily into play in the autumn as schools, colleges, and universities struggle with demands to reopen and the realities of the contagion’s power.

More from Publishing Perspectives on industry statistics is here. More on the Association of American Publishers is here. More from us on Kristen McLean and NPD is here, More on the coronavirus COVID-19 pandemic and its impact on international book publishing is here and at the CORONAVIRUS tab at the top of each page of our site.