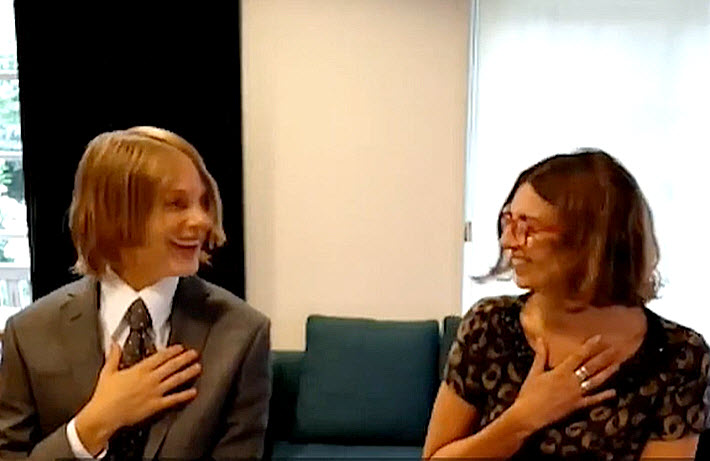 A book written in a child’s voice wins the 2020 International Booker Prize, its author from a devoutly religious Dutch farming family, and its translator a specialist in Dutch and French into English. 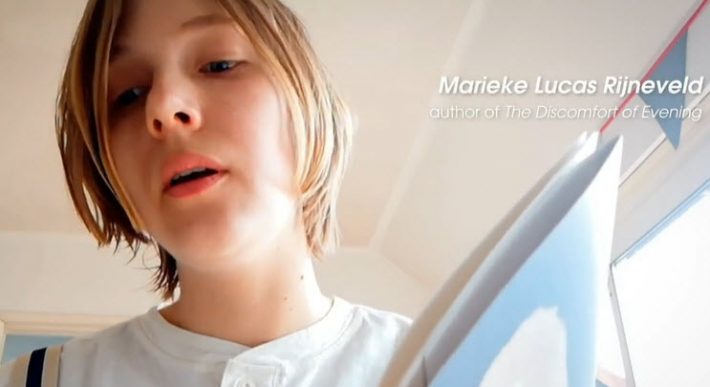 Rijneveld: Youngest Winner of the Prize to Date

In a pandemic-safe online announcement on a bed of rippling piano music this evening in London, the Booker Foundation has named the Dutch author Marieke Lucas Rijneveld and translator Michele Hutchison winners of the 2020 International Booker Prize for The Discomfort of Evening.

On learning of their win Rijneveld—whose preferred pronouns are they/them—said, they were “as proud as a cow with seven udders.”

Originally published by Uitgeverij Atlas Contact B.V. in Amsterdam as De avond is ongemak, the book is published in Hutchison’s translation in the United Kingdom by Faber & Faber, and in the United States by Graywolf.

Rijneveld, at 29, is the youngest author to win the prize, and the book is the first debut effort to find top favor with the jury. 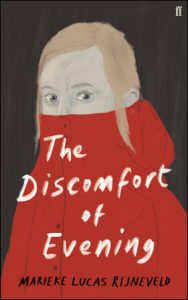 Our usual note: Keep in mind that this is not the Booker Prize for Fiction. The Booker International Prize is a younger award established in 2005 to honor an author and translator equally for a work of fiction translated into English.

The prize is awarded annually for a single book translated into English and published in the UK or Ireland. Both novels and short-story collections are eligible.

In a statement of rationale provided to the news media prior to the embargoed release of the news, this year’s jury chair Ted Hodgkinson says, “We set ourselves an immense task in selecting a winner from our superb shortlist, filled with fiction bold enough to upend mythic foundations and burst the banks of the novel itself.

“From this exceptional field, and against an extraordinary backdrop, we were looking for a book that goes beyond echoing our dystopian present and possesses a timeless charge. 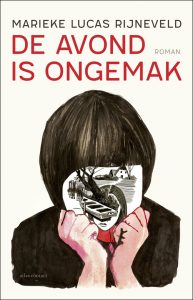 “Combining a disarming new sensibility with a translation of singular sensitivity, The Discomfort of Evening is a tender and visceral evocation of a childhood caught between shame and salvation, and a deeply deserving winner of the 2020 International Booker Prize.”

Hodkinson and his jury associates’ initial pool of titles for consideration this year comprised 124 books, translated into English from 30 languages. 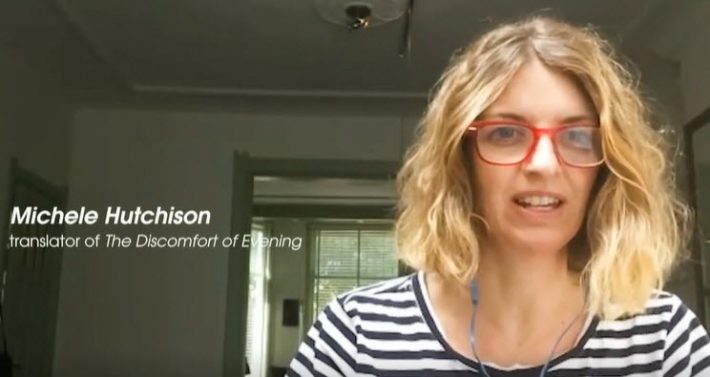 Translator Michele Hutchison talks about the translation challenges in her work on ‘The Discomfort of Evening.’ Image: The Booker Foundation announcement ceremony

Born in April 1991 in Nieuwendijk, Netherlands, Marieke Lucas Rijneveld grew up in a Reformed farming family in North Brabant before moving to Utrecht. 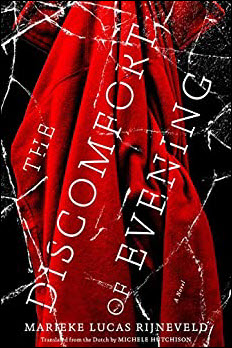 Rijneveld still works on a dairy farm and has won awards not only for The Discomfort of Evening but also for a first poetry collection, Calfskin.

In a March interview for The Guardian by Claire Armitstead, Nicholas Wroe, Sian Cain, Will Forrester, Jade Cuttle, and Kim Willsher, the author said they find a sense of stability in being a one-day-per-week farmer: “Farming keeps me grounded. The cows are my best friends; I like cleaning out the stables and shoveling the shit.”

Following a stint as an editor, Michele Hutchison became a literary translator from Dutch.

Her translations include the bestselling An American Princess by Annejet van der Zijl (see our story here); Mona in Three Acts by Griet op de Beeck; and Seaweed by Miek Zwamborn. She is also co-author of The Happiest Kids in the World.

The Discomfort of Evening, tells the story of Jas and her farming family in a strict Christian community in the rural Netherlands.

One winter’s day, her older brother joins an ice skating trip. Resentful at being left alone, she attempts to bargain with God, pitting the life of her pet rabbit against that of her brother. He never returns.

As grief overwhelms the farm, Jas succumbs to a vortex of increasingly disturbing fantasies, watching her family disintegrate into a darkness.

Here are the titles that accompanied The Discomfort of Evening on the shortlist this year.

Books under consideration for the 2002 honor must have been published in English in translation by UK publishers between May 1 last year and the 30th of this month. There’s no restriction on the number of submissions per publisher  again this year, but the foundation advises that this will be kept under review and may change in future years.

Crankstart, the US-based charitable foundation of Sir Michael Moritz KBE and his wife, Harriet Heyman, is the new supporter of The Booker Prize and The International Booker Prize, succeeding the 18-year sponsorship of the Man Group. Crankstart has committed to an initial five-year exclusive funding term with an option to renew for a further five years. The new arrangement began on June 1 and saw the original prize return to being known as the Booker Prize, while the prize for literature in translation has become the International Booker Prize.

Booker is the UK’s leading food wholesaler with 198 business centers and a national delivery network. It serves more than 441,000 catering customers, 94,000 independent retailers, and 641,000 small businesses.

More from Publishing Perspectives on both Booker Prize programs is here. And more from us on international publishing and book awards programs in general is here. More on the coronavirus COVID-19 pandemic and its impact on international book publishing is here and at the CORONAVIRUS tab at the top of each page of our site.