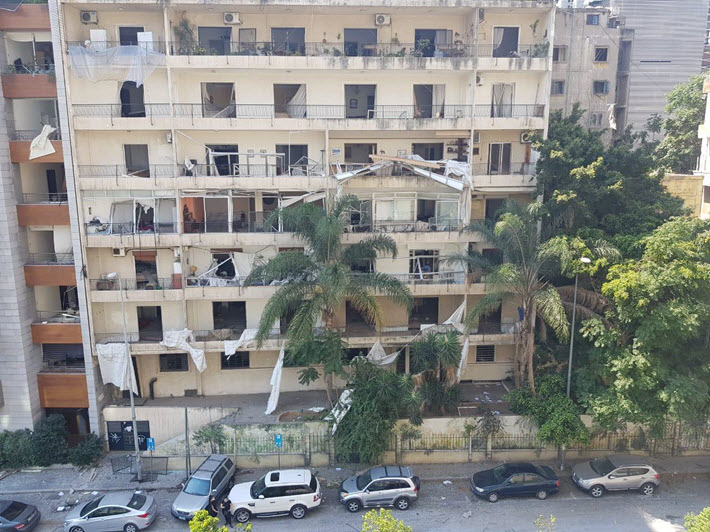 The blast at the Port of Beirut has left many in publishing struggling in a deepening crisis of physical devastation, economic collapse, political upheaval, and viral spread.

A view of the exterior of publishing consultant Therese Nasr in Beirut after the August 4 blast. Image: Provided by Bill Kennedy, Avicenna Partnership

Emergency Fund: ‘Our Friends in Beirut’

At a time when there’s too much news, too many developments, too fast a pace to the changes and surprises and outrages, the cataclysmic blast on August 4 in the Port of Beirut was an arresting reminder of the fragility not only of human life but also of the assumptions we make about modern urban safety.

If you’ve had trouble getting a sense for the ground-level catastrophe, we can commend to you today (August 19) the harrowing account by Seema Jilani at The New York Review of Books. Jilani is a pediatrician, the wife of Wall Street Journal reporter Dion Nissenbaum and the mother of young Iman.

“As we made our way down the street toward the ambulances, I noticed I was stepping on one of my living-room cushions. I’d bought it on Etsy; it was now half a block from where it usually sat. My foot now used it as a stepping-stone over debris to get my blood-stained, wounded daughter to an ambulance. Seeing an ambulance leaving, we sprinted toward it and were among the last people who got aboard.”

Bill Kennedy is a rights agent and consultant whose Avicenna Partnership Ltd. is based in Oxford, UK. He specializes in publishing marketing and sales in the Middle East, Cyprus, Greece, Malta, and Turkey. 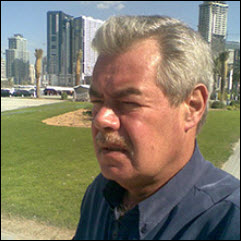 One of his key contacts in the Mediterranean is Therese Nasr, who until May was COO of Ceil, a book wholesaler and distributor based in Beirut, and before that spent more than 30 years with Levant Distributors, also based in Lebanon.

Kennedy has been in contact with Nasr—whose own situation is very challenging—and has provided us with images and what information he’s been able to gather so far from publishing-related people and companies in Beirut following the explosion of the port warehouse that for six years housed what is reported to have been some 2,750 metric tons of ammonium nitrate.

As Reuters has reported, specialists have estimated that the blast had the force of some 200 to 300 tons of high explosives. Latest figures available at the time of this writing, carried by CBS News, indicate that  at least 171 people were killed. Some estimates are at more than 200 fatalities. CNN, which maintains a bureau in the city about a mile from the port, has estimates of more than 6,000 injuries.

Isabel Coles at the Wall Street Journal is reporting that a surge in coronavirus COVID-19 cases has followed the devastating effects of the blast, one nurse telling her, “We lost control” during the violence of the blast and its aftermath in care facilities. “Nobody was taking precautions.”

And publishing people who work with companies and people in the region say that contacting colleagues in the city has been extremely difficult, if not impossible.

Kennedy’s report to Publishing Perspectives, we should point out, is anecdotal but appreciated, and some of the details reinforce the fears of those hoping to provide assistance from many parts of the international publishing community. 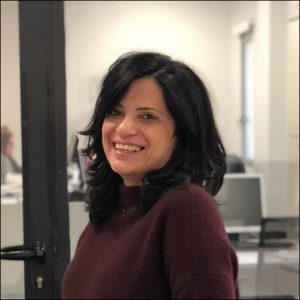 Nasr herself, Kennedy tells us, “was returning to her home from her church in the Achrafieh area of the city, so she was unhurt. All windows in her home were blown out by the shock wave, so her apartment is in a dreadful state but, hopefully, is structurally sound in all respects other than the balcony.

“Workmen from her home village of Hammana, some 26 kilometers from Beirut, are currently attempting to repair what they can with the limited materials they can acquire. Her car has also been badly damaged and is currently undrivable.”

Nasr is working with Kennedy to identify publishing employees and interests impacted by the emergency.

Kennedy has set up a GofFundMe account, Our Friends in Beirut, to which donations can be made. At this writing, the effort has collected £3,750 (US$4,951) toward a goal of £10,000 (US$13,202). An example of one case already being addressed: A colleague of Nasr, formerly with both Levant and Ceil, found her husband’s dessert shop destroyed in the blast and her mother’s home wrecked. Nasr and Kennedy have worked to provide funding to the family to stabilize their situation.

Several Companies’ Reports from the Aftermath 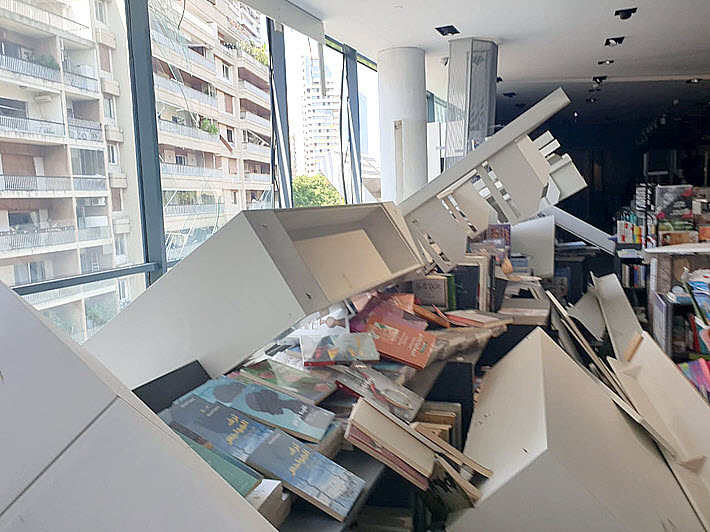 In news Kenney has gathered of other publishing and bookselling interests impacted:

Papercup Bookstore, which operates both as a retailer and in B2B, works in art books, architecture, and design. Owner Rania Naufal tells Kennedy that although staffers are reported safe, the company’s site in the Mar Mikhael district (about a kilometer from the blast site) has been destroyed. Naufal’s home has sustained heavy damage and the family is staying with relatives outside Beirut.

“What time some of the population can spare from repairing the devastation in their own lives is spent working out how best to leave their country.”Bill Kennedy, Avicenna Partnership

AA Studio, a distributor of architecture and design books, has had its office and warehouse damaged both internally and externally. A downtown office location took significant damage, as reported by management.

Librairie Stephan, a distributor and publisher, has sustained damage two showrooms, though owners and managers report that they’re safe. The company handles English- and French-language titles.

Librairie Antoine‘s buying and ordering team are reported to be safe. The Mkalles part of the city, Kennedy says, was only lightly damaged. The bookstore chain’s CEO, Sami Naufal, reports that his top-floor family apartment’s windows in the Hamra district were blown out in the second explosion’s shock wave. Their workforce has reported no casualties to date, although bookshops in the chain have sustained damage.

Ciel, the wholesaler/distributor for which Nasr worked, has taken damage to its building. The office is on the coastal Dbayeh Highway north of Beirut. The timing of the blast, roughly 6 p.m., meant that many employees will have been reaching their homes in the city, but Kennedy has heard back from the buyers’ group, and they report that they’re safe. One employee reportedly had driven past the port just minutes before the event.

Political Upheaval Amid the Crises 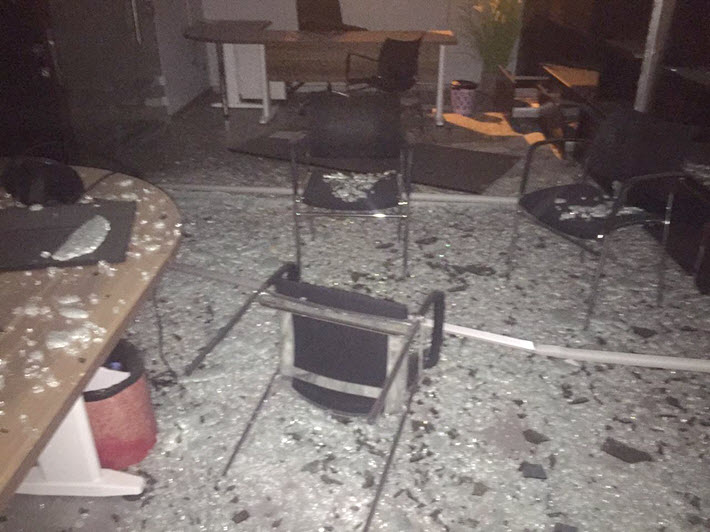 Kennedy says that insurance companies locally based are “a long way from being in a position to even consider claims, either personal or for business.”

In news following the blast, the United Nations-backed tribunal on Tuesday (August 18) convicted a member of the Iranian-backed Hezbollah for conspiring to kill former Lebanese prime minister Rafik al-Hariri in 2005. The country’s economy already was in collapse, the trigger for massive street protests that have wracked the capital for months, while the alleged negligence behind the storage and detonation of the ammonium nitrate at the port has triggered the resignation of prime minister Hassan Diab and his cabinet, awash in allegations of “chronic corruption.”

Kennedy says that Rafik Hariri International Airport has become “congested with inbound aid personnel and equipment,’ as air freight costs are running five to six times more expensive than they might have been months ago, because of the sharp devaluation of the currency.

Additionally, he says, there are reports that police personnel and government agencies are hampering cleanup efforts by citizens and aid agencies, as private homeowners try to house several hundred people left homeless.

Again, these observations are those of Bill Kennedy and his contacts in Lebanon and cannot be independently verified. It’s clear to anyone, however, that elements of the publishing industry—along with all the people of Beirut and greater Lebanon—are facing a multilayered crisis of staggering proportions.

“What time some of the population can spare from repairing the devastation in their own lives.” Kennedy tells Publishing Perspectives, “is spent working out how best to leave their country.”

More from Publishing Perspectives on publishing in Lebanon is here and more on the Port of Beirut blast is here.