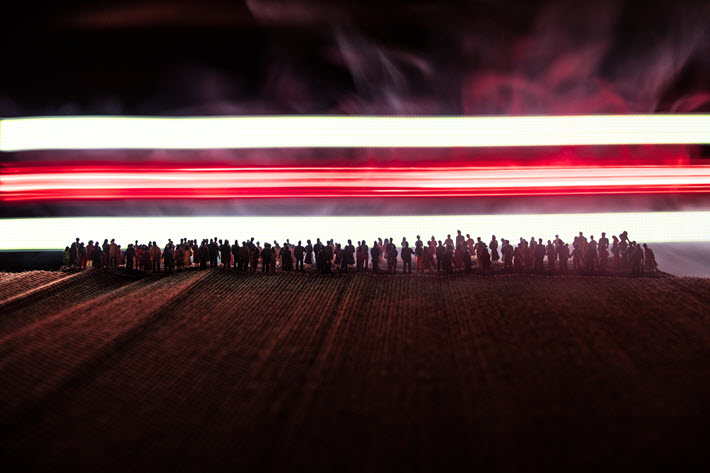 The unrest in Belarus has alarmed humanitarian activists and the European authors’ association, as political pressure mounts on the Lukashenko government in Minsk.

An August 19 artist’s conception of a light show based on the red-white-red striped flag being used by protesters in Belarus. Image – iStockphoto: Zeferli

‘Belarusian Writers Stand By Their People’

As the Belarusian election protests expand, opposition leader Svetlana Tikhanovskaya has spoken from her exile in Lithuania today (August 21). She is urging widening strikes, asking citizens not to be “fooled by intimidation,” as reported by the BBC.

Days before the now-disputed election of August 9, PEN International issued a joint statement—writing for the 24 PEN centers that stand in various parts of the world. That statement of concern is focused on what the Belarus PEN Center’s Sviatlana Aleksievič has said were two dozen political prisoners whose freedom of speech the center believed was being suppressed.

“Among them are bloggers and journalists, patrons of culture, Aleksievič wrote, “those who in 2020 awakened the Belarusian society, and for the first time in 26 years create serious competition for the authoritarian regime of Aliaksandr Lukašenka [longtime Belarusian president Alexander Lukashenko].

“Today, Belarusian writers stand by their people as the story is being written in the streets and squares, not at desks.”

Following this, the Union of Belarusian Writers issued an appeal for international solidarity—that message is posted by the European Writers’ Council—in which the union calls for a halt to violence against peaceful protesters whose throngs have rocked Minsk.

The Belarus writers’ union—in alignment with the wider national furor—is demanding the “free, fair, and transparent” elections that the resistance in the country is marching to achieve. The organization also has produced a set of harrowing anecdotes—reproduced here by the European Writers’ Council—alleging stark mistreatment of imprisoned demonstrators who have widely been reported to be undergoing aggression and public embarrassment.

Indeed, this morning (August 21), The Economist (which does not allow its writers bylines) has released a story describing, as other media have reported, how “prisoners were forced to kneel with their hands behind their backs for hours in overcrowded cells. Men and women were stripped, beaten, and raped with truncheons.”

“The repression was ostentatious,” The Economist piece continues. “Some victims were paraded on state television. By August 19, at least four people had been killed. The aim was both to terrorize citizens and to bind the regime’s officers by having them commit atrocities together, a tactic used by dictators and mafiosi to prevent defections.” 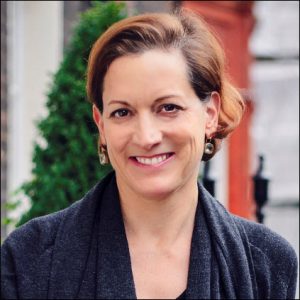 And at The Atlantic, Anne Applebaum, author of the recently released Twilight of Democracy: The Seductive Lure of Authoritarianism (Penguin Random House/Doubleday, July 21) this morning has published a new essay on “The 22-Year-Old Blogger Behind Protests in Belarus.”

Protesters, she points out, are carrying not the state flag of Belarus but the “red-white-red striped flag, a banner first used in 1918 and long associated with Belarusian independence.”

And the “marvelous feat of coordination” of thousands of citizens peacefully flooding into streets in the capital Minsk and smaller towns are being guided by young “Stsiapan Sviatlou, who lives outside the country and runs a channel called Nexta Live on the encrypted messaging app Telegram.”

Applebaum—who, as Publishing Perspectives readers know, is serving on this year’s Cundill History Prize jury—has written a deeply informative piece about how more than 2 million people are being kept in the organizational know because Sviatlou operates safely from Poland (a nation Applebaum knows well), “a place where police can’t get the data on his telephone, so it is safe to read what he writes and to send him information.”

In making its own statement, the European Writers’ Council says it “fully supports the appeal of its member organization, the Union of Belarusian Writers (UBW), for solidarity, freedom of expression and transparent and democratic new elections.”

The council’s president, the German author Nina George, says, “We are in a continuous contact with our EWC member, The Union of Belarusian Writers, and the news we are receiving is deeply disturbing and depressing.

“Our independent sources have sent us reports of brutal police violence in the streets and of even worse abuse in prisons, including psychological torture, indiscriminate beatings and rape. This violence is directed against all those Belarusians who are exercising their rights of freedom of expression and freedom of assembly and demanding the implementation of truly democratic principles in their country.

“We urge the governments of the European Union not to stand by in silence, but to bring strong pressure to bear on the autocratic regime of Alexander Lukashenko, to put an end to this violence and uphold the values on which the European Union is based.”

In fact, on Thursday (August 20), it was reported by The New York Times in a roundup that the European Union leadership did indeed on Wednesday reject the results of the August 9 election in Belarus, calling them illegitimate and saying “that they would shortly impose sanctions on those involved in electoral fraud and protest suppression.”

There also, of course, is reason to be concerned about the mass protests underway in Belarus because of the presence of the coronavirus COVID-19 there. At this writing, the 4:27 a.m. ET update (0827 GMT) of the Johns Hopkins Coronavirus Resource Center cites 69,950 cases of the contagion in the relatively small national population of 9.5 million, with 632 fatalities reported.

Nina George concludes, “Belarus is part of Europe. Do not leave the people of Belarus alone in their efforts to build up a truly democratic country. We must all use our most powerful democratic instrument: our words.”