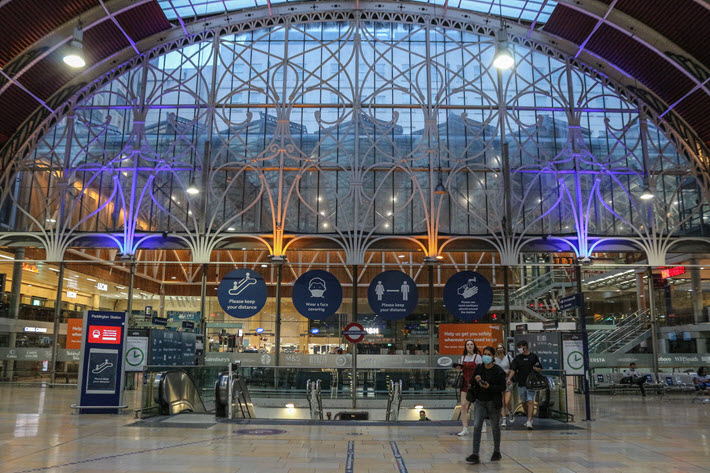 The UK’s two-year-old awards program, the Comedy Women in Print Prize, switches to a digital event for its awards in September. 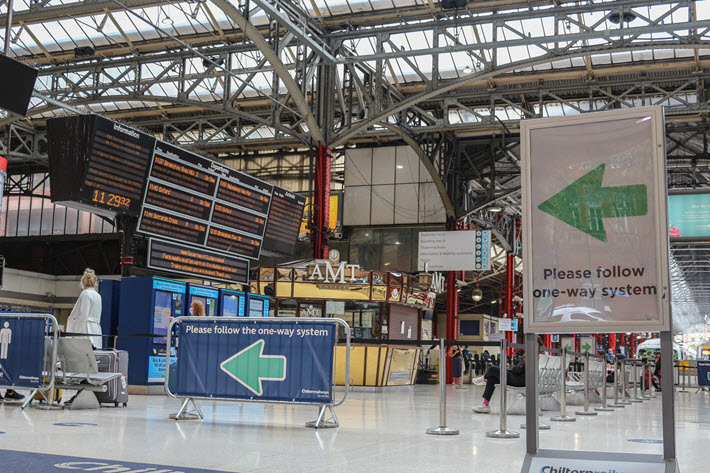 In an August 15 shot, London’s Marylebone Station uses one-way traffic patterns and other measures to try to mitigate the spread of the coronavirus. Image – iStockphoto: TJS

Half a year into the coronavirus COVID-19 pandemic, many people still seem at pains to talk about doing digital rather than live events as if it’s something frightening and unheard-of. The two major political parties in the United States are running their conventions this week, for example, talking of being without balloon drops as if no one had ever heard of the virus or seen bedroom broadcasting at work in their conference calls.

In publishing, in fact, the only surprise in recent weeks has been the Hay Festival Segovia announcement on June 25 that that show is actually to have a physical outing next month, albeit with only one-third capacity in its venues. And as the Spanish government orders curfews on nightclubs, bars, and restaurants–and curbs on smoking and vaping–it seems unclear that Segovia can go forward as planned, although no change as yet has been announced.

In the UK today (August 17), the UK’s  Comedy Women in Print Prize has surprised no one by announcing that its September 14 winners’ celebration will be an online affair rather than being set at the Groucho Club in London.

This is the program established at the Edinburgh Fringe in August 2018 by Helen Lederer, the actress (Absolutely Fabulous: The Movie, 2016) whose 2016 book Losing It: In Debt, Divorced, and Desperate is from Pan Macmillan. Lederer had detected a lack of support and visibility for female comedy writing.

In its media messaging today, the program says that in the 7 p.m. BST event on the 14th of September (1800 GMT), winners are to be announced in each of the program’s three categories:

There’s also to be an honorary award for a Witty Woman of the Year.

In an optimistic move, the program says it expects to have “a belated in-person celebration at the Groucho Club on January 25.” 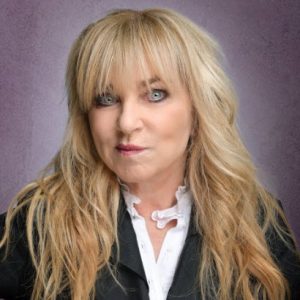 In a prepared statement, Lederer is quoted, talking of “a high-tech digital extravaganza. We have so many exciting witty women to celebrate. Last year was very glam and we had to turn people away, This year we have inclusive, global partying for everyone online. Win-win.”

As Elliot Smith reported for CNBC on Friday (August 14), European markets closed lower after the UK imposed a new 14-day quarantine period on all arrivals from France, starting Saturday (August 15).

In its 7:27 a.m. ET update (1127 GMT), the Johns Hopkins Coronavirus Resource Center cites the UK as 12th in the world for caseloads, with 320,345 infections confirmed. The market stands fifth in the world for deaths, with 46,791 fatalities in a population of 67 million.