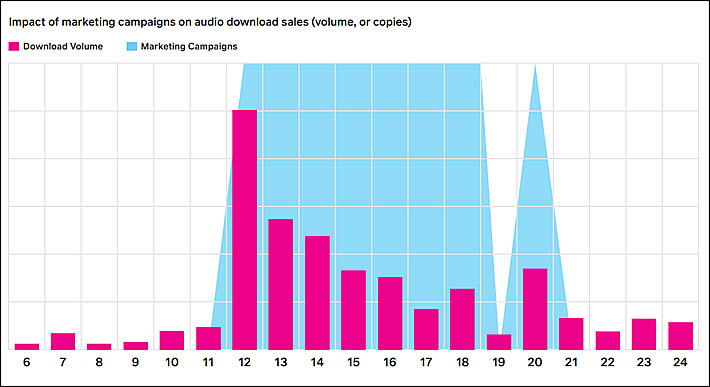 Has the pandemic accelerated lasting digital adoption among readers? Bookwire offers an early look at ebook and audiobook sales in three markets this year. 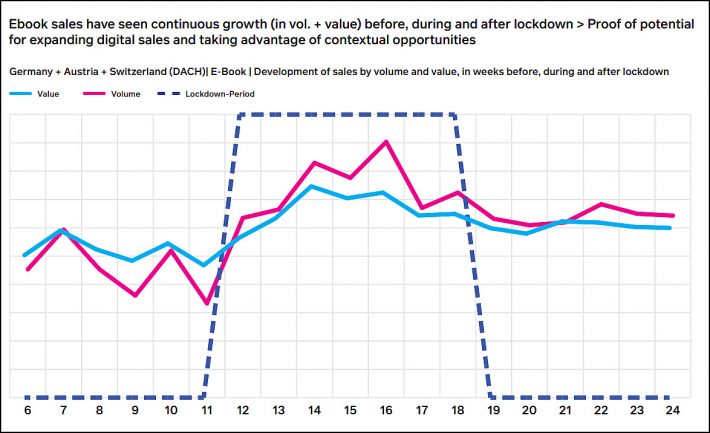 In a project using data from the German ebook distributor and aggregator Bookwire, the Vienna-based consultant Rüdiger Wischenbart has made another of his periodic looks at consumer behavior as part of his “Digital Consumer Book Barometer” series. This one is focused on the German, Austrian, and Swiss markets during the early months of the still ongoing coronavirus COVID-19 pandemic.

Bookwire is a regular sponsor of Wischenbart’s “Barometer” analysis, as well as of his Global Ebook series. The distributor’s Svenja Rohr gathered the numbers from Bookwire’s market data and Rosa Egg made the graphics for what’s called a “Bookwire Insights Report.”

If anything, the effort, while certainly interesting, may be as premature as the unmasked  exhibition tennis matches staged in June by Novak Djokovic in Belgrade. Those matches resulted in at least a dozen infections of world-class players, their staff members, and loved ones. And the new report from Wischenbart and Bookwire has arrived just as Soo Kim at Newsweek and others report on new upswings in the pathogen’s progress in Europe, including Thursday’s (August 13) jump of 1,419 new cases in Germany recorded by Worldometer—prompting strong warnings from the country’s health minister, Jens Spahn.

Nevertheless, even as an early assessment, the new COVID-19 edition of Wischenbart’s series for the German-language markets this week is interesting in the context of a key question in world publishing today: how much lasting impact could the pandemic’s consumer patterns have on digital adoption in the long term?

The images provided follow a span of weeks No. 6 to 24 in the first half of 2020. In the visual seen at the top of our story, what’s indicated is that after the period of lockdown (seemingly the same in all three countries), ebook sales remained for some weeks at a higher level than before the lockdowns.

But below, in a look at how “strong marketing campaigns” were seen doing well against the backdrop of the pandemic (the large central squarish section), we don’t know what campaigns are referred to, nor which publishers created them in which country.

While it’s easily understood that there should be a jump seen in digital consumption at times when physical bookstores are shuttered and print literature is quarantined even in reopened shops, the question that cannot yet be answered is an intriguing one: Will a typical print reader who dives into ebooks and/or audiobooks for virus-era safety stick with those formats in our presumably vaccinated future?

In a bit of discussion, Wischenbart points out that “gains in content for younger audiences” provided “the most spectacular trend accelerated by the pandemic and the lockdown.”

He sees “huge promise” in gains of between 16 and 65 percent in the field.

As we know, however, parents working from home found themselves not only needy of educational material for their younglings but also of entertainment to try to maintain a rational homelife. Once educational norms return—alas something that in many markets is proving very hard to achieve—it’s hard to say that “huge promise” will be fulfilled by what’s been observed so far.

And on the main, the younger reader (herself and/or her parents) has been traditionally a tougher sell for digital than adults. Will the pandemic’s challenges have changed this? 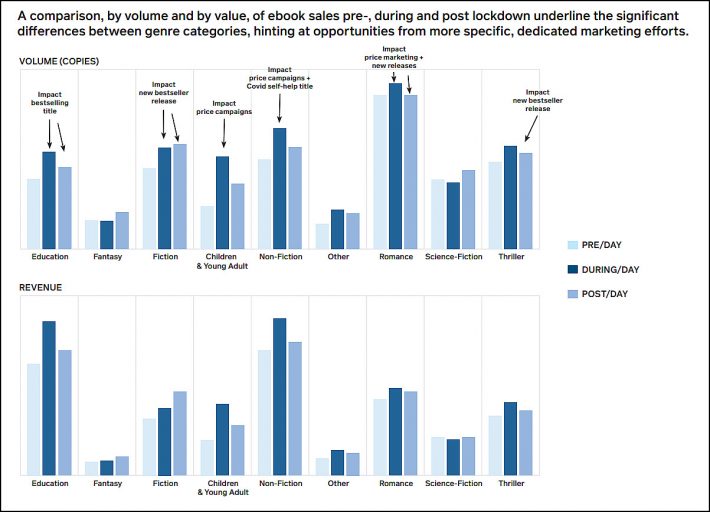 Here is the graphic from Egg and Wischenbart on the question of flat-rate subscriptions tracked by Bookwire in Austria, Switzerland, and Germany by comparison to one-by-one downloading models. 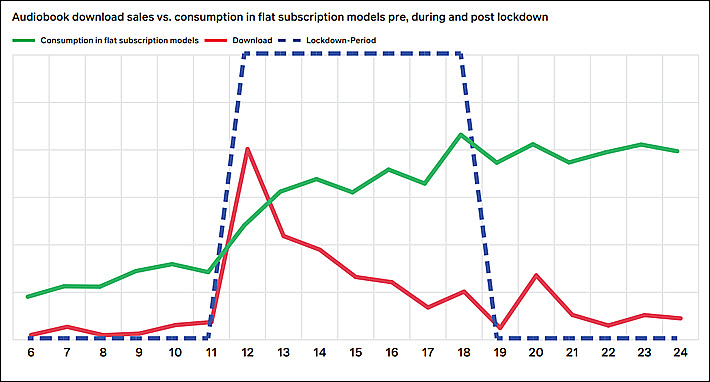 Some of the better material here comes not from charts but from some discussion late in the 15-page report that gives us a couple of key numbers, perhaps indicating that there are times when our love of charts and graphs isn’t as helpful as a few straightforward figures.

The Fog of a Public Health War

Ultimately, the Bookwire-Wischenbart report (PDF) is a welcome look at what can be seen in three markets as tracked by one distributor, even if (no one’s fault) we just don’t know what implications are here for the post-pandemic world we all long to reach.

The question of digital adoption and its possible acceleration during the emergency is a tantalizing one, certainly. But we’d do well to look at the kind of observations an exercise like this can provide without rushing to say what they indicate.

Our good colleague Andrew Albanese of Publishers Weekly puts this well today (August 14) in his weekly commentary with Christopher Kenneally at Copyright Clearance Center’s Beyond the Book. “While publishers have put a thumb on the scale of digital sales to boost print,” Albanese says, “and of course to preserve jobs and bookstores and a longstanding book culture, in fact the efficiency and the profit margins for digital products are much better.

“This has always been the tradeoff with digital—smaller revenues, bigger earnings. Whether or not this changes the industry’s outlook for the future, we’ll just have to see.”

And there are few things more singular in modern history than the playout of the deadly coronavirus COVID-19 world pandemic.

To know what impact it may have, as Albanese says, “we’ll just have to see.”