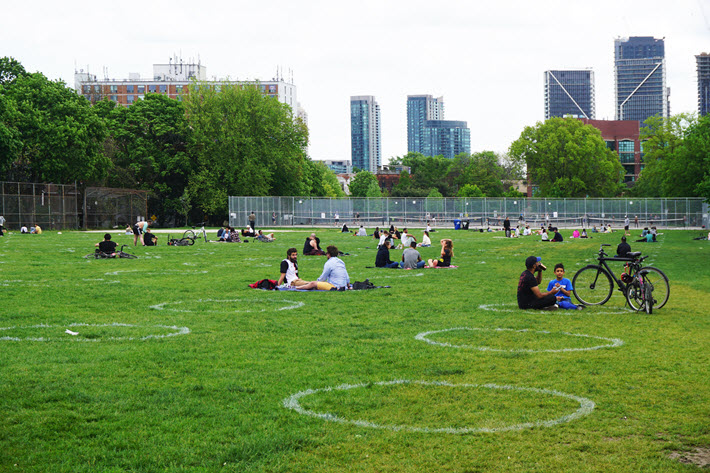 Taking a look at 19 internationally prominent women politicians, the YA title ‘In Good Hands’ by Stephanie MacKendrick is to be made into a TV series. 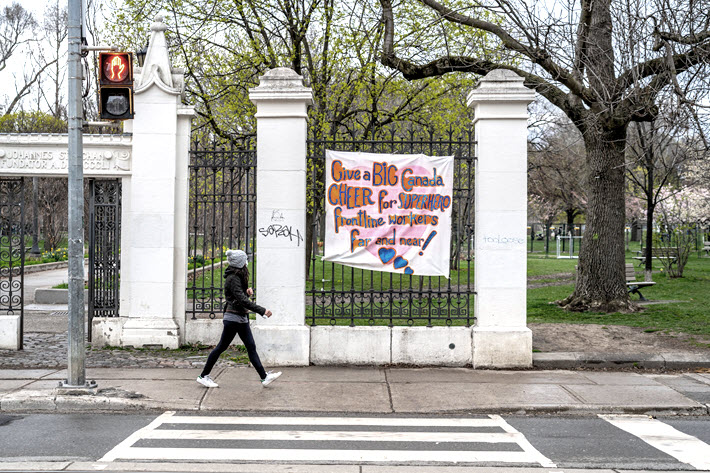 In Toronto, a woman walks past a banner praising the work of medical workers in the coronavirus pandemic. Image – iStockphoto: RM Nunes

‘Production and Direction: An All-Female Team’

With a plan to make a documentary series on prominent international female politicians, White Pine Pictures has optioned Stephanie MacKendrick’s In Good Hands: Remarkable Female Politicians from Around the World Who Showed Up, Spoke Out and Made Change, a YA title published in April by Kids Can Press.

Both the independent film and television production company White Pine and the children’s publishing house Kids Can Press are based in Toronto, and Publishing Perspectives readers will remember from our Coronavirus Worklife feature that in June, the filmmaker and publisher saw their climate-crisis program CitizenKid: Earth Comes First  go to YTV, a channel owned by Corus, which also owns Kids Can Press.

In Good Hands presents 19 accounts of women who have run for office, including Jenny Durkan, the mayor of Seattle; Shaharzad Akbar, an adviser to the president of Afghanistan; Stav Shaffir, a member of the Israeli Knesset; Hala Lattouf, Jordan’s minister of social development; Juliana Lunguzi, a former parliament member in Malawi; Catherine McKenna, member of the Canadian parliament; and Jacinda Ardern, New Zealand’s prime minister.

The book is produced under Kids Can Press’ YA imprint, KCP Loft.

In a prepared comment, White Pine president Peter Raymont is quoted, saying, “Countries and states with female political leaders—such as Germany, Finland, Taiwan, New Zealand—have fared much better during the COVID-19 pandemic. These women are role models for future leaders.

“Our goal for the series is to hire an all-female team to produce and direct the episodes. We’ll be approaching potential funding partners immediately.”

A Summer’s Debate on Comparative Leadership

Raymont’s reference to countries led by women performing better in the coronavirus COVID-19 pandemic references what has been, for some, a point of debate. While a story from Amanda Taub in The New York Times in May surveyed successes in the pandemic from Germany’s Angela Merkel, Finland’s Sanna Marin, Taiwan’s Tsai Ing-wen, and New Zealand’s Jacinda Ardern, agreement has not been universal on this.

Early this month, Hilda Bastian wrote at Wired that as attractive the idea is to her, personally, the notion of one gender’s leadership edge over the other’s in pandemic conditions may be “confirmation bias,” in which engaged observers tend to see, in essence, what they want to see.

“Now we have more formal data,” Bastian wrote. “Two sets of academics tried to analyze differences in COVID-19 outcomes among countries with men and women leaders, and they posted their results as preprints in June. Each concluded that countries led by women have done better. But not only were both studies vulnerable to bias; neither found a statistically significant overall difference based on gender. “Their approaches could not overcome the fundamental problems caused by the small sample size of women leaders.” 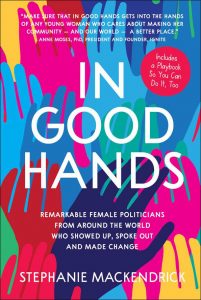 Clearly, one useful outcome of the documentary series White Pine expects to make is that it may be able to inspire women who see it to consider public life and service.

“Having recently worked with Peter and his team on the CitizenKid: Earth Comes First documentary,” says Lisa Lyons, Kids Can Press’ president and publisher, “I know that Stephanie’s book is in very ‘good hands,’

“With women at the forefront of societal change, now is the perfect time for In Good Hands to make the leap from page to screen to inspire the next generation of women leaders.”

MacKendrick, the book’s author, says, “The message I tried to convey to young women though the profiles of women leaders from different countries, backgrounds, and paths to power is: ‘There’s a path for you and you can do this.’

“Broadening the reach of this important message at this point is history can only help with the ultimate goal of getting more women into office everywhere.”

MacKendrick has twice been listed as one of WXN’s Most Powerful Women Canada Top 100, and is vice-chair of the Samara Centre for Democracy.

More from Publishing Perspectives on the Canadian market is here, on Canada’s Kids Can Press is here, on children’s books is here, and on screen development of content is here.  More from us on the coronavirus COVID-19 pandemic and its impact on international book publishing is here and at the CORONAVIRUS tab at the top of each page of our site.