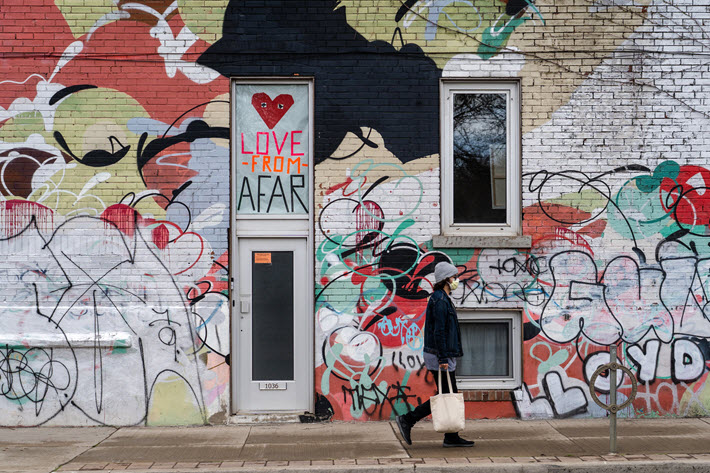 Wattpad officials say they can detect no theft of users’ ‘financial information, stories, private messages, or phone numbers’ in the data breach the platform is said to have suffered.

A masked shopper in Toronto on May 2. Image – iStockphoto: RM Nunes

‘The Safety and Security of the Wattpad Community’

In an update today (July 20) to its statement on reports of a data breach, Wattpad says, “Out of precaution, and as is common in these situations, we are resetting passwords and advising users to change passwords on other sites if they used the same password.”

The statement—which was not volunteered to the news media but was readily provided at Publishing Perspectives’ request—does not fully confirm the episode, nor does it put a number on how many accounts may have been affected.

Reports on data security sites have referenced an alleged 270 million user records being involved in a breach.

The reading and writing user-generated-content platform, as Publishing Perspectives readers know, says that it has more than 80 million active users monthly, each spending an average 37 minutes daily on the site, coming to 23 billion minutes spent on the platform monthly.

“We are aware of reports that some user data has been accessed without authorization,” Wattpad wrote in the statement on its corporate site on July 14. “We are urgently working to investigate, contain, and remediate the issue with the assistance of external security consultants.

“Out of precaution, and as is common in these situations, we are resetting passwords and advising users to change passwords on other sites if they used the same password.”Wattpad statement

“From our investigation, to date, we can confirm that no financial information, stories, private messages, or phone numbers were accessed during this incident. Wattpad does not process financial information through our impacted servers, and active Wattpad users’ passwords are salted and cryptographically hashed.”

Mozilla’s Firefox Monitor entered listing on Sunday (July 19) saying, “On June 29, 2020, Wattpad was breached. Once the breach was discovered and verified, it was added to our database on July 19.” The reported breach is described as comprising passwords, IP addresses, email addresses, and dates of birth. Additional content may include, according to Firefox, “bios, genders, geographic locations, names, social media profiles, user Web site URLs, usernames.”

Mozilla’s guidance on Firefox Monitor for this reported breach includes having users change passwords, using a unique password for Wattpad; update other logins that use the same password; masking your IP address.

The brief statement from Wattpad concludes, “We are committed to maintaining the trust that our users have placed in us to ensure the safety and security of the Wattpad community.”

In more routine Wattpad news, the platform is now accepting writers’ submissions of their stories on the site for consideration in the annual Watty Awards.

The grand prize winner for this year will get a book deal to be published by Ashleigh Gardner’s Wattpad Books. Other prizes include consideration for Wattpad Paid Stories, Wattpad Stars, and other monetization programs for the platform’s most successful authors, including possible opportunities for screen development with Wattpad Studios.

Since the Wattys were launched in 2009, the platform’s international writers have submitted more than 1.2 million stories for consideration. Last year, the total came to almost 170,000 entries.

To be eligible, a story must have been posted after January 1, 2017, and it has to be at least 50,000 words and marked as complete. Award categories (at least 10) are on this site here.

More from Publishing Perspectives on Wattpad is here