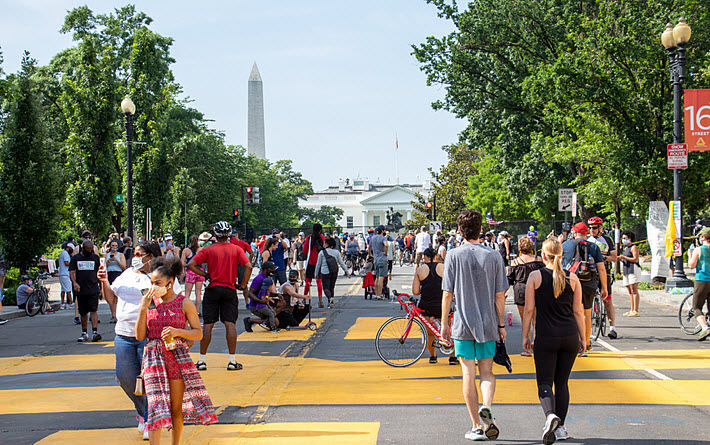 On Wedensday evening (July 1), an appellate court decision has vacated a temporary restraining order on Simon & Schuster in the coming (July 28) publication of Mary Trump’s book about the Trump family.

Update (July 1): Since publication of this article earlier today, Justice Alan D. Scheinkman of the New York Supreme Court’s appellate division has vacated a June 30 temporary restraining order against Simon and Schuster in the upcoming publication of Too Much and Never Enough: How My Family Created the World’s Most Dangerous Man. by Donald Trump’s niece Mary.

Justice Scheinkman writes that Simon & Schuster is not proven to be “an agent of” author Mary Trump and notes that “S&S has not agreed to surrender or relinquish any of its First Amendment rights.” Scheinkman then, having uncoupled Simon & Schuster, orders a modified temporary restraining order on Mary Trump pending a scheduled July 10 hearing.

In a statement provided this evening to Publishing Perspectives, Simon & Schuster writes, “We are gratified with the appellate court’s decision to overturn the temporary restraining order issued by the lower court against Simon & Schuster.

“We support Mary L. Trump’s right to tell her story in Too Much and Never Enough, a work of great interest and importance to the national discourse that fully deserves to be published for the benefit of the American public. As all know, there are well-established precedents against prior restraint and pre-publication injunctions, and we remain confident that the preliminary injunction will be denied.”

Background on the Latest Court Action

Publishing Perspectives readers will remember that an attempt to block Mary Trump’s book was lodged late in June in the Queens County Surrogate’s Court.  The judge quickly rejected the case and the book is set for a release on July 28. You may recall the growing level of interest in the world publishing community in this, as the International Publishers Association issued a statement of support for Simon & Schuster.

On Tuesday afternoon (June 30), however, a new court action temporarily blocked publication of the book.

We’ll walk through the pertinent steps here because–as Simon & Schuster’s attorneys at Davis Wright Tremaine led by Elizabeth McNamara are wrote on Tuesday evening–a successful halt to publication of the Mary Trump book “would be unprecedented in this country,” a violation of what the world publishing community refers to as the “freedom to publish.”

We also are aware that our international readership–many unfamiliar with details of US legal proceedings–may be helped by a simple parsing of the steps and documents moving in the case.

As Maggie Haberman and Alan Feuer wrote at The New York Times on Tuesday, “Judge Hal Greenwald of the New York State Supreme Court issued the temporary restraining order until a hearing on July 10 to decide whether [Mary] Trump’s book … violated a confidentiality agreement she signed with other members of the Trump family in connection with a dispute over the estate of Fred Trump Sr., the president’s father.”

Following the news of the court’s action, the publishing house released to various news media a short statement of regret about the temporary restraining order (sometimes called a “TRO”), reading: “We are disappointed that the court has granted this temporary restraining order. We plan to immediately appeal this decision to the appellate division, and look forward to prevailing in this case based on well-established precedents regarding prior restraint.”

Similarly, an attorney for author Mary Trump also filed a statement, objecting to the move as “a prior restraint on core political speech that flatly violates the First Amendment.”

Overnight, Simon & Schuster has provided Publishing Perspectives with copies of its court filings, both its objection to the temporary restraining order and an affidavit from Jonathan Karp, who at the end of May succeeded the late Carolyn Reidy as CEO of the Big Five house.

In the newly filed opposition to the temporary restraining order—a document called a memorandum of law—Simon & Schuster writes that the action “identifies no misconduct by Simon & Schuster.

“Instead, Mr. Trump”–Robert Trump, the president’s brother who is leading the family’s court action–”believes that simply because he alleges that Ms. [Mary] Trump violated a nondisclosure agreement, one that Simon & Schuster did not know about and was not a party to, he may force Simon & Schuster to stop the presses and throw the brakes on the delivery trucks, halting publication of the book.

“Such an outcome would be unprecedented in this country. Mr. [Robert] Trump has not even attempted to make the requisite showing that the public would be harmed by the publication of the book and, absent that showing, his requested injunctive relief must be denied.” 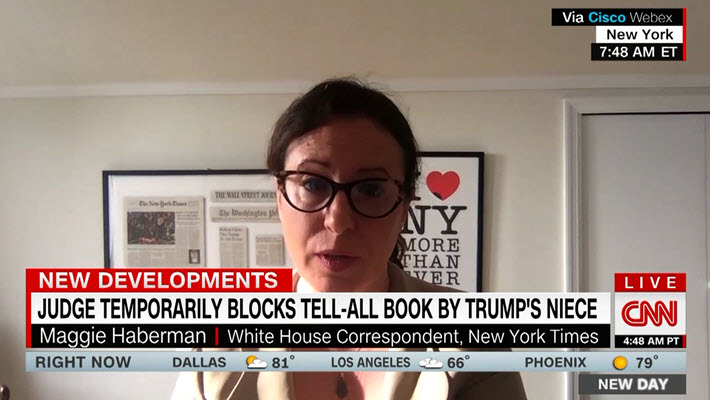 As the Times’ Haberman has pointed out on CNN’s New Day this morning (July 1), it’s in that statement that we learn that the publishing house was unaware of a nondisclosure agreement relative to Mary Trump.

She has pointed out that the publishers’ filings also reveal that “the book is already in its printing.”

Indeed, the memorandum of law asserts, “Simon & Schuster did not learn anything about Ms. [Mary] Trump signing any agreement concerning her ability to speak about her litigation with her family until shortly after press broke concerning Ms. Trump’s book about two weeks ago, well after the book had been accepted, put into production, and printing had begun.”

The memorandum goes on to say that as of June 30, 75,000 copies already were printed and bound, “and thousands have already shipped to sellers.”

Haberman and others are pointing to this part of Simon’s positioning because in the Trump administration’s challenge to the Bolton case, the fact of books having been produced and shipped to booksellers was deemed by the court to make the question of stopping publication a non-starter. “The White House filed to try to stop it”—Bolton’s The Room Where It Happened—”very, very late,” Haberman said to John Berman on New Day this morning, “only a couple of days before it was going on sale, and it was obviously printed by then.”

The Mary Trump book, by contrast, still is four weeks from its release date, of course.

Simon & Schuster CEO Karp—a former journalist with the Washington Post, the Miami Herald, and the Providence Journal—recounts in his affidavit, filed overnight with the memorandum of law, that S&S won an auction for Mary Trump’s book. He says he understands that nine or 10 other publishers were in contention for it.

In signing an “individual guarantee” with Simon & Schuster as part of her deal, Karp writes, “Ms. [Mary] Trump warrants and represents, in relevant part, that she has the ‘full power and authority to make this agreement and to grant the rights granted hereunder’ and that she ‘has not previously assigned, transferred or otherwise encumbered [the rights].’ agreement

“The agreement also includes Ms. Trump’s representation that these warranties are ‘true on the date of the execution of this agreement’ and ‘true on the date of the actual publication’ of the book. Further, the agreement provides that the ‘publisher shall be under no obligation to make an independent investigation to determine whether the foregoing warranties and representations are true and correct.’”

Karp goes on to say that nothing has given Simon & Schuster any reason “to doubt the accuracy” of Mary Trump’s warranties and that in a meeting with her about her proposal for the book, “She revealed that she was the primary source for the Pulitzer Prize-winning New York Times article “Trump Engaged in Suspect Tax Schemes as He Reaped Riches From His Father.”

“Mary Trump will be providing valuable eyewitness source material for any historians who want to study the Trump presidency and for citizens more generally. “Jonathan Karp, Simon & Schuster

The publisher accepted Mary Trump’s delivery of the manuscript on May 7, Karp writes, and began shipping copies “to domestic retailers” on June 25, including “shipments to retail booksellers large and small, from large national chains and online entities to a host of small, independent booksellers.” Once those copies were out the door, Karp writes, “title to the physical copies passed to the retailer or wholesaler.”

And having positioned the situation in terms of physical production and shipment, Karp then returns to the constitutional protection for publication in the United States.

“The author offers,” he writes, “a personal and never-before-seen perspective on President Trump (her uncle), President Trump’s parents (her grandparents), and his brother (her father). Mary Trump will be providing valuable eyewitness source material for any historians who want to study the Trump presidency and for citizens more generally. Ms. [Mary] Trump’s first-hand experiences are of critical importance for an informed citizenry.”

Citing potential unspecified financial losses to the publishing house for its investment in the book, Karp adds that the book is “currently No. 1 on the Amazon bestsellers list.” It also is standing, in pre-order, at this writing, at No. 4 on the Amazon Charts’ nonfiction list.

Karp ends by writing, “I understand that no claim is being made against Simon & Schuster at all. Whatever legal ramifications of the purported agreement referenced in Mr. [Robert] Trump’s complaint may be for Ms. [Mary] Trump, they are irrelevant to Simon & Schuster’s First Amendment right to publish.”