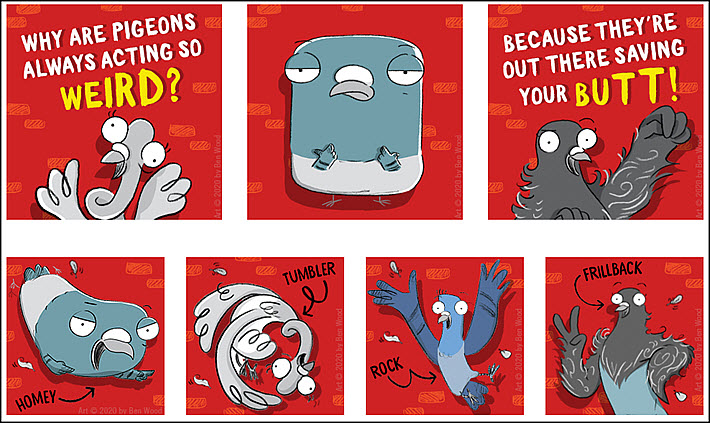 The Australian author-illustrator team behind the ‘Real Pigeons’ books – Andrew McDonald and Ben Wood – are headed into film development with Nickelodeon.

The sass-talking, pop-eyed vigilante birds of Australian author Andrew McDonald and illustrator Ben Wood’s Real Pigeons books have been announced today (June 8) to be headed for an animated film and television series from the kids’ network Nickelodeon, owned by Viacom.

Published by Random House Books for Young Readers, McDonald and Wood’s series has two books out and one on the way. The series is classified for middle grade and as picture books.

Written by McDonald to evoke a wiseacre tone that can appeal to boys as well as girls, you catch the lingo in the series’ promotional copy:

“Spending too much time staring at birds out your window?

“Well take another look, because what looks like an ordinary pigeon might just be saving your butt!

As in most copy for children, the content is littered with exclamation points—and they wonder why our kids are on the ceiling with attention deficit disorders—but the voice of the work is clever, Wood’s illustrations hold a lot of diversity, and the pages use an instructional format for storytelling. “How would you feel about a park full of pizza, French fries, and ice cream? That’s how Rock,” a pigeon, “feels now. Very happy!”

You get a clue to the sound of the text from the fact that it was first published in Australia, by Hardie Grant Children’s Publishing, in that market part of Egmont.

The deal Nickelodeon is announcing is with Fulwell 73, the production company based in London and Los Angeles that debuted in 2007 with In the Hands of the Gods about young British footballers traveling to Argentina to meet Diego Maradona. 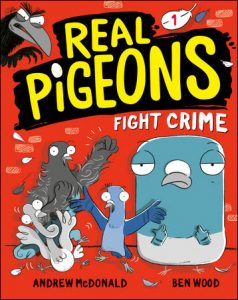 Led by Fulwell’s James Corden and Ben Winston, the books now are reportedly in at least 10 territories with hundreds of thousands of copies sold. “The deal,” according to media messaging, “underscores key elements of Nickelodeon’s content strategy, to build and expand the worlds of popular franchises.”

To that end, the work is being developed “to air on all Nickelodeon platforms,” and the brand includes not only film and television but also consumer products, “location-based experiences,” and publishing.

Ramsey Naito, who’s executive vice president in Nickelodeon’s animation production and development, is quoted, saying, “Real Pigeons Fight Crime is about a secret squad of crime-fighting pigeons with high stakes and true hilarity making it a perfect fit for our audience. 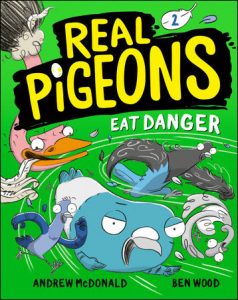 “By fusing the humor and expertise of this the incredible team at Fulwell 73 Productions, we’re ready to show kids what pigeons really do—fight crime, solve mysteries, take down bad guys, and keep neighborhoods safe!” (The exclamation point pandemic has claimed Naito, too, it seems.)

The project is to stand alongside existing Nickelodeon properties including the newly announced Big Nate series, as well as franchises including Star Trek, SpongeBob SquarePants, and Henry Danger, among others. 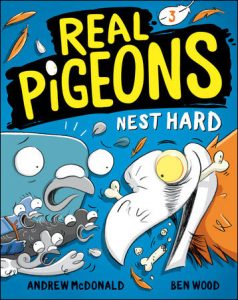 The way the company likes to talk about its content selection process is to say that it’s “informed by the network’s ongoing research and insights into today’s generation of kids, who are the most diverse generation ever and expect to see themselves authentically represented in media and in the world around them; who want to make a positive difference in the world as they grow up; who consider social media stars as their top role models, alongside their parents; and who increasingly meet their much-desired need for family time by co-viewing entertainment content together.”

Corden and Winston are to executive produce the television series with McDonald and Wood attached as consultants.

McDonald is based in Melbourne and has been shortlisted for the Readings Children’s Book Prize and the Australian Book Industry Awards. Illustrator Wood has handled at least 30 books for children, some carried in the Children’s Book Council of Australia’s “notable” lists. He’s been shortlisted for the Australian Book Industry Awards twice, in 2019 and this year.