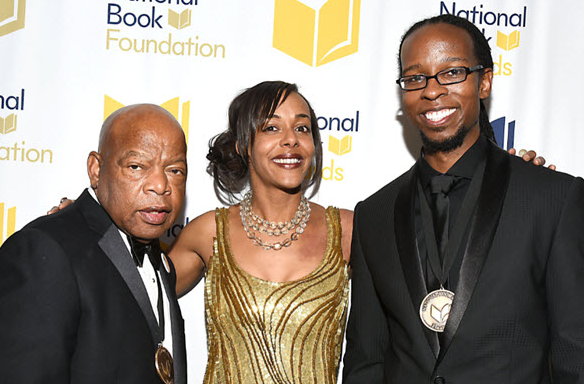 As she plans her final awards season, Lisa Lucas takes stock of the progress the National Book Foundation has made in service to readers and authors. 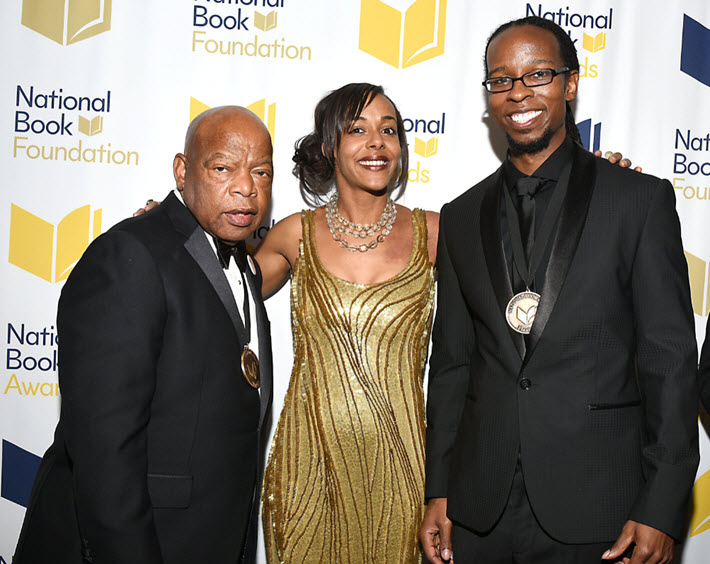 ‘It’s Important That We’re Not an Island’

Today (July 27), the body of the American civil rights leader and Democrat of Georgia Rep. John Lewis lies in state for several hours in the Capitol Rotunda in Washington before being moved outdoors for a period in which members of the public can pay their respects in as safe a setting as possible, relative to the coronavirus COVID-19 pandemic.

Many in the US publishing industry will recall the 67th National Book Awards ceremony in New York City in 2016, when Lewis—along with Nate Powell and Andrew Aydin—won the award in Young People’s Literature for March: Book Three, the third (of four) in a graphic novel series on the US civil rights movement.

“Some of you know I grew up in rural Alabama, very, very poor,” Lewis said in his acceptance speech. “Very few books in our home. And I remember in 1956 when I was 16 years old, some of my brothers and sisters and cousins went down to the public library to try to get library cards. We were told that the library was for whites only, and not for coloreds.

“And to come here and receive this award, this honor. It’s too much.”

As news was released on July 17 of Lewis’ death of cancer at age 80, some in the book business shared the video of the congressman’s emotional comments on receiving the award.

In an interview with National Book Foundation executive director Lisa Lucas, she tells Publishing Perspectives of how frequently she, too, has seen this video shared on social media since Lewis’ death. In many ways, the moment is emblematic of the kind of character and prominence the foundation and its programs—most visibly its awards—have come to hold during her tenure.

It was announced on July 15 that after this year’s award cycle ends in November, Lucas will be moving to Knopf to be the new senior vice-president and publisher of the prominent Pantheon and Schocken imprints.

In looking back at the work she’s done since she took up her role with the foundation in 2016, Lucas relates the importance of recognizing and promoting the kind of literary contribution Lewis was making to the National Book Award for Translated Literature that the foundation added in 2018.

“It’s just so important,” she says, “to read outside the places you live—just like we talk about the importance of reading black voices, and LatinX voices, and trans voices, every kind of voice that lives within these borders” in the United States. “It’s also just important that we’re not an island.”

‘How Excellent Our Literature Is’

As she and the team plan for what will be a digital rendition of the 2020 awards, she says that while it might have been her preference to have more than five years in her work with the foundation, she’s thrilled with the chance to lead Pantheon and Schocken—and appreciative of so many shouts of congratulations from the publishing community.

“It’s about who the stakeholders really are, not just in promoting the five books that will win but also in having a mechanism to remind us how excellent our literature is.”Lisa Lucas, National Book Foundation

“The dark side of being a brown person,” she says, “in the middle of a revolution, of change in the very fabric of the way we live, is that you don’t want people to feel, ‘She got that job because of affirmative action.'” She still recalls being accused in college of getting into the University of Chicago because of the anti-discriminatory policies of affirmative action.

“Part of any success you have as a person of color is that people challenge it as if you didn’t earn it. So it means a lot” to hear from so many that Knopf publisher Reagan Arthur has made a strong choice in naming Lucas.

And in looking at the kind of insights and ideas she’ll be taking to Knopf from her time at the foundation, she realizes that she’ll be carrying in the benefits of a different view of publishing and literature in the States from that of many who work in the publishing business.

From the vantage point of the National Book Foundation and its awards, “You’re looking at the breadth, all the submissions coming in, you can see who’s disappointed, who’s excited. You’re talking to booksellers, you’re talking to Ingram, you see all these folks from the National Book Foundation perspective, and it shows you so much of this business. It’s about who the stakeholders really are, not just in promoting the five books that will win” in a given year “but also in having a mechanism to remind us how excellent our literature is.

“This is all related,” she says, as she contemplates the move to Knopf, “because you’re talking about readership and thinking about how all these pieces go into finding the reader who connects with the book—in editorial, in sales, in foreign rights.

“It’s marketing, it’s publicity, it’s positioning, it’s having a strategy. We have a strategy for all 25 of our finalists” in the National Book Awards. “You’re doing all that strategizing on behalf of the author and in service to the reader.”

That concept of dual service—working for the reader as well as for the author and the publishing establishment—is part of the nonprofit’s purview that can enrich any element of the value chain in publishing.

“There’s so much,” Lucas says, “that can be learned from the ways a nonprofit works. And the way the nonprofit community is doing things. We look at P&Ls, too. We’re trying to figure out how to be efficient and excellent, too.”

Lucas says she’s thoroughly pleased with the progress the foundation has made.

She points with pride, for example, to the recently announced Literary Arts Emergency Fund that the National Book Foundation has established in association with the Academy of American Poets and the Community of Literary Magazines and Presses (known as CLMP). That US$3.5 million fund is designed to make relief grants where needed as a result of the coronavirus pandemic, thanks to funding from the Andrew W. Mellon Foundation.

“It’s just so important to read outside the places you live—just like we talk about the importance of reading black voices, and LatinX voices, and trans voices, every kind of voice that lives within these borders.”Lisa Lucas, National Book Foundation

Submissions are open here for nonprofit literary organizations and publishers until August 7 for one-time emergency grants of between $5,000 and $50,000 each.

The development of the fund, she says, is both a reflection of how capable the foundation has become of bringing meaningful response to the community’s needs and of being in the right place, itself, for its progress so far.

Now going into its 71st awards cycle, the foundation has undergone years of development to position it with a broad base of financial support.

“What I think I was able to do,” Lucas says, “is really work on building that national presence. We made a strategic plan in 2017 for positioning. The point was not to ‘get big’ but to position things to be big in the future, the first part of what’s intended to be a 10-year arc.

“And what I think I’m really proud about the foundation is that we not only built the profile of the foundation, made submission requirements less restrictive and built up national programming, but we also worked hard on the operational side. We redid our database, we redid our networking so people could work more remotely. The stuff people don’t see is system-building. And there’s fundraising capacity in place now because the system for it is there.”

Cautious about the dangers of growing more quickly than a program of this kind can handle, Lucas and the board led by David Steinberger, she says, have taken a deliberately measured approach toward scaling up the reach and potential of the foundation.

“And actually, my job has been to make it so that someone else can carry on the work. Sometimes it takes 10 or 15 years, 20 or 30 years, for an organization” to develop fully, “and to me that’s energetic and dynamic and exciting.”

While she still has her fifth and final year of the awards to produce, she sees her tenure, she says, as “a mutually beneficial moment in time” when she and the foundation could move ahead in a purposeful sequence of progress.

“And you know,” she says about her upcoming move late this year, “I’m not going very far away.”

More from Publishing Perspectives on the National Book Awards is here, and on awards programs in general is here.  More from us on Penguin Random House is here, and more on women in publishing is here.