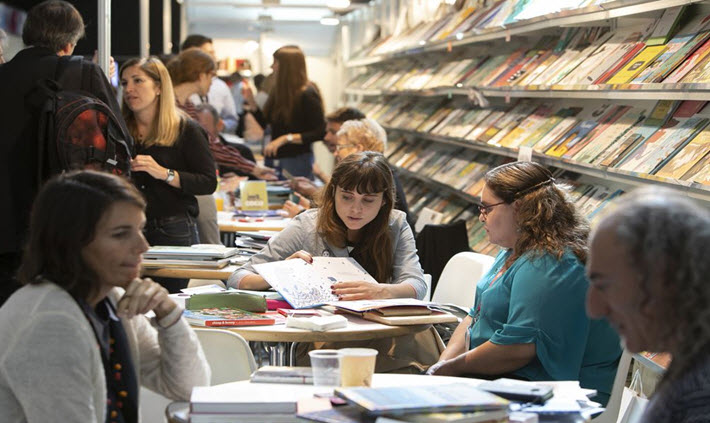 At the Liber18 two years ago in Barcelona, meetings among industry visitors to the Feria Internacional del Libro. Image: Fira de Barcelona

A pattern is developing among book fairs, festivals, and trade shows, bolstered today (July 14) with the news that Spain’s Liber20 will stage a digital and physical rendition of its Liber20 international book fair this way October 7 to 9.

As Publishing Perspectives readers know, Frankfurter Buchmesse is in the process this week of detailing some of the plans for its digital evocation, which is to parallel a physical iteration in Germany, October 14 to 18.

And Dubai’s Emirates Airline Festival of Literature on Monday (July 13) announced its own effort of this kind in the United Arab Emirates.

More such programming is likely to be scheduled during the ongoing coronavirus COVID-19 world pandemic, not least because the digital component in some cases can provide a kind of elasticity in programming options.

If, for example, dates are set but as they approach various expected physical activities begin to look impossible to hold on the ground because of viral load and situational flux, more events can then be shifted to the online option. If travel and physical activity becomes more feasible than anticipated, then the physical elements of the event can be expanded.

In the case of Liber20 in October, this is a fair that alternates its venue each year between Barcelona and Madrid. Promoted by the Federation of Publishers’ Guilds (FGEE), the plan this year is to face the coronavirus crisis head-on, with special emphasis on the hard-hit market and the resulting impact on its publishing industry. Professional workshops are to be expanded by Fira de Barcelona—the producer in place—and rights buyers will be encouraged to access a virtual matchmaking and face-to-face meeting program developed to meet “maximum security and prevention measures.”

The Spanish publishing industry is now estimating that as much as €850 million (US$939 million) have been lost this year to the contagion’s onslaught, roughly €600 million in the domestic market and €250 million.

“Given the current situation,” organizers write in their media messaging this week, “Liber is proposing an edition that will help the Spanish publishing industry regain commercial momentum, especially abroad.

“The FGEE has already extended an invitation to 620 international buyers from 60 countries—30 percent more than in the last edition—through its international program in which the ministry of culture and sports are collaborating.”

The effort is also coordinated with support from the Economic and Commercial Offices Abroad of the secretary of state for commerce; ICEX Spain Export and Investments; the Generalitat de Catalunya and the Spanish Center for Reprographic Rights (CEDRO); and various trade missions and related export agencies.

‘Reactivating the External Presence’ Through Trade 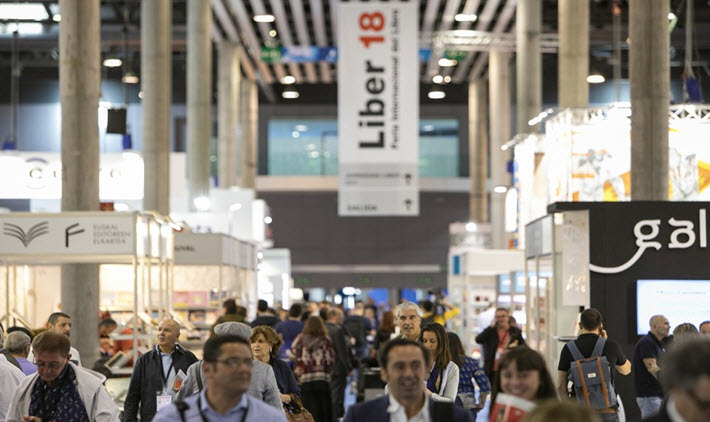 On the exhibition floor at the Liber18 two years ago in Barcelona, the Feria Internacional del Libro. Image: Fira de Barcelona

A lot of emphasis is being placed on the presence of key international buyers during the show, as the market works to raise its visibility on the international stage, including through interviews that exhibitors will be able to handle online with interested players unable to be on-site in Barcelona. 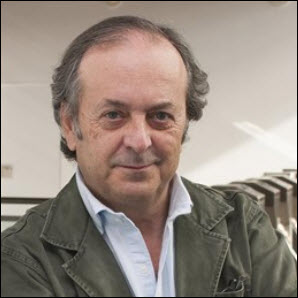 On the domestic front, the program is working to develop support from national professionals “with decision-making power or purchase power, interested in acquiring news of editorial production in various genres and subject areas.”

In a prepared statement, Miguel Barrero, who is president of the FGEE and the organizing committee of the Liber program, is quoted, saying, “The sector needs to recover as soon as possible the commercial momentum that was lost during this first half of the year, and Liber can mark a turning point when reactivating the external presence” of international trade “to help spread the economic, cultural, and social value of the book industry.”

All of this, of course, as Barrero points out, can also go a long way to help achieve longer-term understandings with engaged governmental agencies and offices, “to support reading and the book and to make Spain become a country of readers.”

As Publishing Perspectives readers are aware, the Spanish publishing industry has been alarmed by a general lack of focus on the book business in pandemic-relief efforts by Madrid, and is in the process of addressing this during July as well as in its planning for the October Liber.

The Spanish publishing industry invoices some €3 billion (US$3.4 billion) annually (domestic and international combined). More than 222 companies are involved, and the Latin American markets, of course, are particularly close to the Spanish book business. 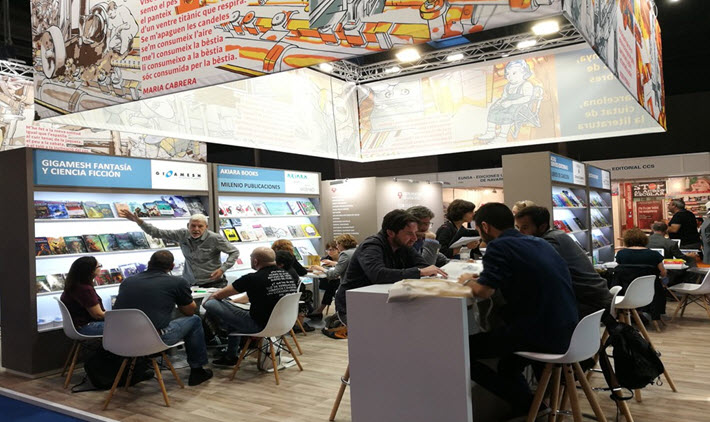 On a stand at the Liber18 two years ago in Barcelona, the Feria Internacional del Libro. Image: Fira de Barcelona

Organizers say they expect to combine actual face-to-face elements in the physical portion of the event with long-distance communications in the digital edition, and that they will “apply a precise anti-COVID protocol, elaborated by the fair facilities with the help of experts in risk prevention and the advice of public health authorities, in order to guarantee maximum security for exhibitors, visitors, speakers, providers, and salon workers.”

Measures to be undertaken will involve conditioning and designing spaces to enable physical distancing, regulation of visitor flows and capacity, tracing of attendee contacts, reinforced ventilation systems, disinfection and cleaning of common areas and stands, systems specific accreditation, and organization of catering services.