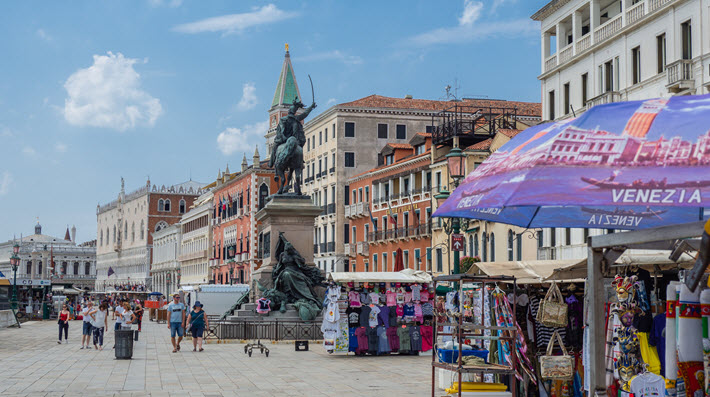 Italian publishers see ‘encouraging signs of an upturn,’ as data from Nielsen and Informazioni Editoriali shows revenue losses were cut in half in July.

A shot from July 17 in Venice where tourism, as in much of Italy, is depressed. Image – iStockphoto: MrKit

Some Sales Shifting Back to Physical Stores

As of July 11, it was announced today (July 28), bookshops’ revenue losses were 11 percent below where they were last year at this point. This, by comparison to a 20-percent drop on April 18, is providing what the Italian publishers’ association (Associazione Italiana Editori, AIE) called in an online presentation from Milan this morning “encouraging signs of an upturn.”

The study has been created by the association’s research group, based on data provided by Nielsen and the Italian Informazioni Editoriali service.

Clearly, caution is needed. As Giovanni Legorano has reported from Rome for the Wall Street Journal, the €25 billion ($28.94 billion) spending package approved by the Giuseppe Conte government on Wednesday (July 22) was not large. Legorano writes, “The modest size of Italy’s measures—the third package of stimulus spending bringing the total to €105 billion earmarked from this spring—reflects the challenges Italy faces in finding the money needed to fight what is expected to be one of the worst downturns in the developed world this year.”

And the Italian publishers’ association has been at pains to convince the government that the book business and other cultural industries need serious and fast support. At times issuing daily reports and commentary, the AIE, led by Ricardo Franco Levi, has tried to tie itself to the educational imperatives of the market as a means of drawing subsidies. 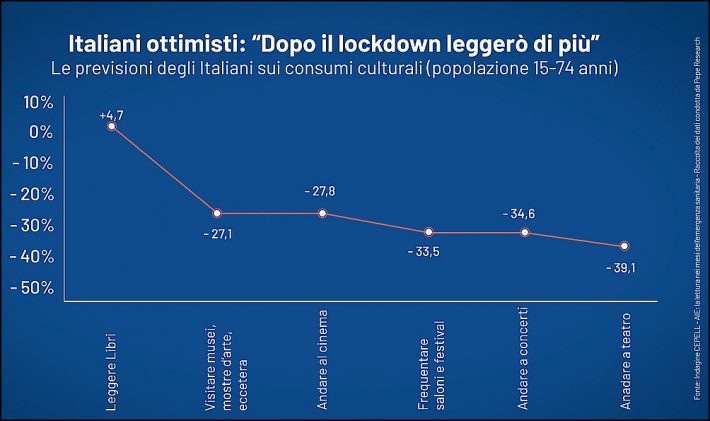 The idea of lessened losses over the late spring dovetails well with the AIE narrative, which has included survey responses showing that some Italians expect “to read more books in the second half of 2020 than in quarantine.” Those saying this, the association reports, responded this way at a rate “five percentage points higher than those who considered reducing time spent on reading.”

And the publishers point to a survey finding that suggests this anticipated uptick in reading is in contrast to respondents’ expected theater attendance (down 39 percent), concerts (down 36 percent), cinemas (down 28 percent), and museums and exhibitions (down 27 percent). Of course, reading is in most cases a solitary activity, safer than those group cultural activities.

The findings today indicate that as of July 11, the value of Italy’s trade publishing market—including bookstores, digital retail, distribution—came to €533 million (US$625 million). That represents that 11-percent drop from the same time period on 2019, when the industry was pulling €600 million. Nevertheless, the publishers like being 11-percent down more than they liked being 20-percent down in April, obviously. 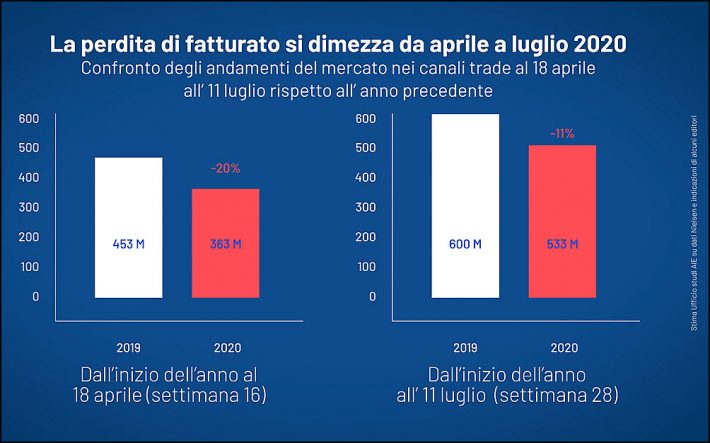 From the Associazione Italiana Editori presentation, comparative valuations for April and July in 2019 and 2020. Image: AIE

The report says that in mid-June, consumers returned to buying books, not only in reopening bookstores but also with an increase in sales online. There’s a 2.5-percent jump in such sales, the report says, as tracked through point-of-purchase monitors excluding sales on Amazon.it. Without week-by-week data from Amazon, the association reports, “If we add Amazon, this past month’s result is highly positive.” In short, publishers are reporting an upswing in online sales as well as in bookstore traffic.

Physical bookstore activity, the association reports, have regained traction, with a share of sales at 52 percent in April moving to 56 percent in July, as digital sales points that were carrying 48 percent of sales in April have declined to 44 percent–the indication being that book retail is resetting in the direction of consumers’ usual non-pandemic preference for brick-and-mortar shops over online outlets.

Last year at this time, the general ration of online to physical book sales was 27 percent online and 73 percent in stores, and the industry is watching now to see if a full reset occurs or whether Italian consumers will continue to buy at a higher rate online. 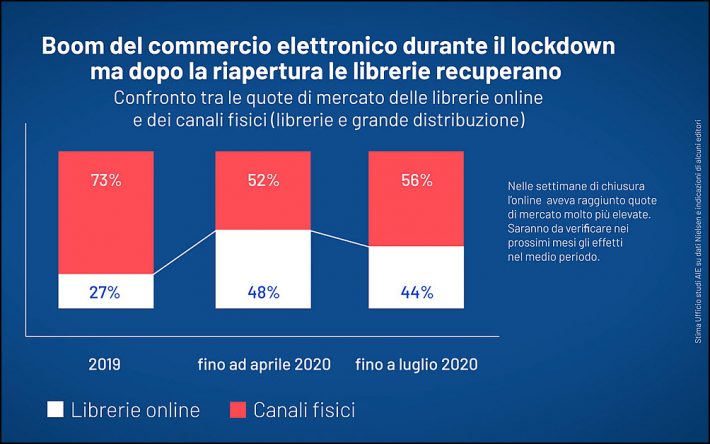 From the Associazione Italiana Editori presentation, comparative physical and online retail bookselling in 2019 (left), then in April 2020 (center) and in July 2020. Image: AIE

And overall, one of the Italian economy’s biggest problems is tourism. While visitors may not be the prime consumer base for books, the country’s overall economic life turns heavily on tourism. The Rome-based reporting team of Chico Harlan and Stefano Pitrelli has produced two demonstrative stories on the issue for the Washington Post.

One, on Friday (July 24), show tourism-sector workers struggling badly to make ends meet on the Amalfi Coast, while another, published Monday (July 27), is about a family of shopkeepers in tourist-bereft central Rome turning a couple of locations into stores focused entirely on masks, some at luxury prices.

At this writing, the 3:35 a.m. ET update (0735 GMT) of the Johns Hopkins Coronavirus Resource Center places Italy at 15th in the world for caseloads, with 246,286 infections and fifth in the world for deaths, at 35,112 fatalities in a population of 60 million people.