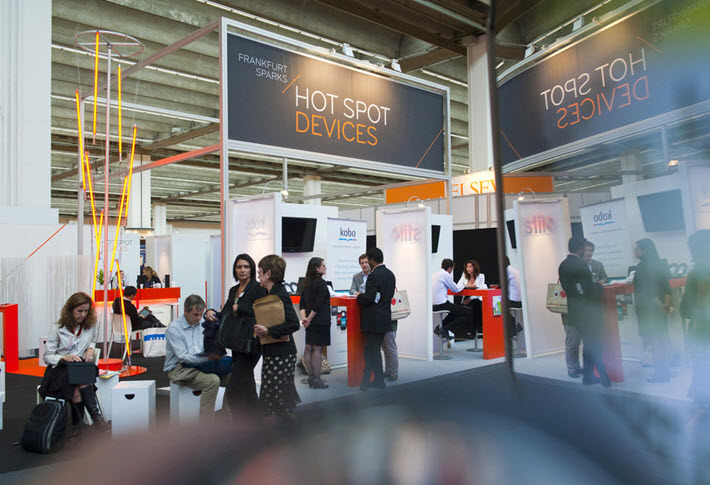 ‘Frankfurt Rights’ and ‘Frankfurt Conference’ lead programming planned for the trade show’s digital operation being outlined this month by organizers.

A digital connectivity spot at Frankfurter Buchmesse a decade ago in 2010. Image: FBM, Peter Hirth

In the Lead: ‘International Rights Business’

Following its announcement Friday of a €4 million grant from Germany’s “Neustart Kultur” stimulus package—allocated in June by the federal government to ‘Restart Culture’—organizers of Frankfurter Buchmesse have begun releasing details of the digital component of the trade show’s planned hybrid approach.

The Neustart Kultur funding is to make the digital events and services of Frankfurter Buchmesse 2020 accessible free of charge by trade visitors and book fans wherever connectivity is available, media messaging says, introducing new branding—”All Together Now”—for the October 14 to 18 effort to “celebrate authors and stories at the fair and in a virtual environment.”

And while concepts of togetherness are surely welcome amid the many forms of isolation and distancing imposed by the constraints of the coronavirus COVID-19 pandemic, but Frankfurt is a business fair and its core value, like that of smaller trade shows in other parts of the world, is the buying and selling of international rights and licenses for content. To that end, the rights business is a centerpiece not only in each year’s physical iteration of the fair but also in the 2020 digital programming now under development.

“Frankfurt Rights” is the name of the show’s platform for rights and license trading, which is to allow publishers this year to evoke their catalogues online with keyword indexing and facilities for discovering titles and contacting rights holders. All trade visitors for the 2020 fair are to have access to the platform by mid-September, and money from the Neustart Kultur grant has been earmarked to pay for those users’ access to continue free of charge for nine months following the October trade show.

As Publishing Perspectives readers know, these digital services are becoming expected now, as other shows develop their own evocations—Bologna Children’s Book Fair initiated one in May—and Frankfurt is experienced in this, with its controlling interest since 2016 in IPR License, a property that also has investment interest from Copyright Clearance Center and China South Publishing & Media Group.

Jenny Kühne, key account manager for Frankfurt’s rights and licenses and the project lead on the digital program, is quoted in the show’s news material, saying, “Frankfurter Buchmesse is the platform for the international rights business. That’s why it’s especially important for us to provide our customers with effective digital services, in addition to our physical venue. This allows literary agents, editors and rights and license managers from around the globe to be present and drive their business forward.”

More broadly, the new information indicates that Frankfurt’s URL, buchmesse.de, is being positioned to house the 2020 platform, which is to include an integrated calendar of events and to allow companies to generate their own presence on “special theme pages for both trade visitors and culture fans” as well as in exhibitor listings as usual. The BookFest program continues to accept proposals for content in its October 17 marathon online program through Wednesday (July 15).

Registration for digital participation will be open as of mid-August, we’re told, and the calendaring of programming is to begin surfacing in September.

Also beginning in mid-September, trade visitors are to have access to a “matchmaking tool,” free of charge, for communications with colleagues and business prospects.

Several of Frankfurt’s signature clusters of content are also working to develop thematic programming online, including:

The Arts+ now is being presented as a trading platform, as well, for “creative intellectual property, concepts, text, images, and audio content.” If this is ringing a bell, it’s because it was announced in mid-May, when the effort was seeded as a closed Facebook group called “Pitch your CIP.” CIP is meant to stand for “creative intellectual property,” but may not be a widely enough understood term to be useful.

The concept, however, has drawn some 800 signups among workers in publishing and other creative industries, and more information is here.

And the traditional fellowship programs of Frankfurter Buchmesse are expected to find a footing of some kind in the digital mix, as well for the Frankfurt Fellows, the Invitation Program (for publishers in emerging markets), and Young Talent initiative programming

An international news briefing is planned for Tuesday (July 14), when we anticipate learning more about the digital prospects for Frankfurt, in the usual protocol being hashtagged at #FBM20.

The Coronavirus Context in Germany 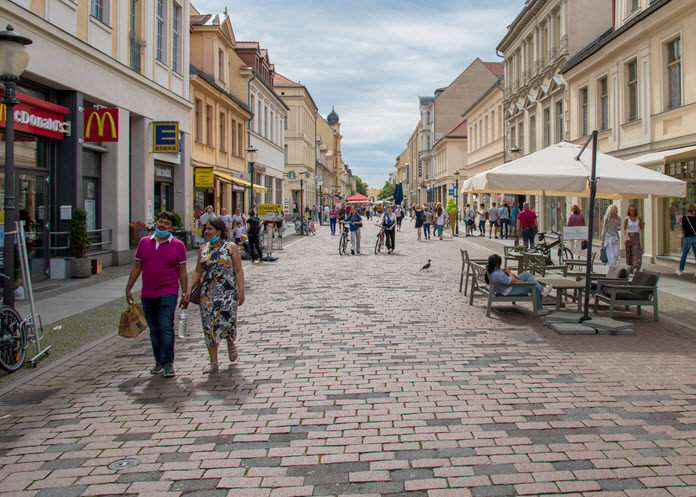 The importance of the digital evocation of the fair this year is central to the effort, of course, because the international picture for the pandemic is in remarkable and volatile flux. Ironically, at this writing, the host nation, Germany, is maintaining its stance as a comparative success story in its handling of the virus’ onslaught. At this writing, it’s ranked by the Johns Hopkins Coronavirus Resource Center in its 12:43 a.m. ET update (0443 GMT) at No. 17 in the world for a caseload of 199,919 infections with 9,071 deaths in a population of 83 million.

A writeup from Deutsche Welle this morning says that the health minister Jens Spahn is warning German holiday travelers to be vigilant about partying while on vacation to avoid the danger of a second wave that could challenge the flattening of the coronavirus curve praised by the world public health community.

As in many markets, meatpacking plants have proven a weak point, an outbreak in the western town of Gütersloh in June infecting 1,500 workers and precipitating a two-week lockdown of more than 600,000 people. As Reuters reports, the plant company in question, Toennies, is drawing fire for requesting that the government pay workers quarantined without falling sick.