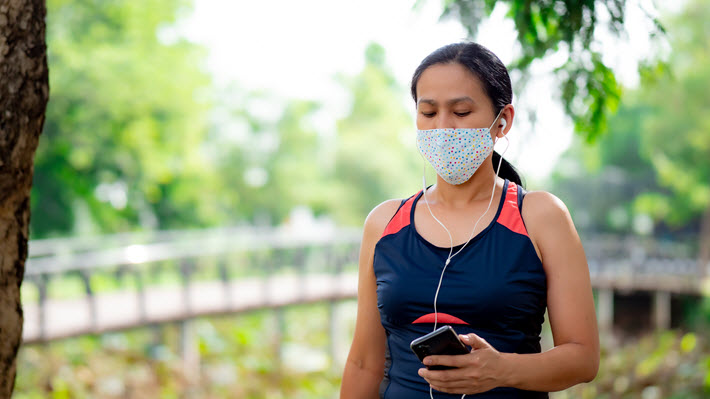 Ahead of Frankfurter Buchmesse in October, the trade show has commissioned a white paper assessing audiobooks in the international industry.

Growth and Interest in a Promising Sector

One of the most important lines in the summary of audio perspectives released this morning (July 30) by Frankfurter Buchmesse is this, on Page 7: “A deeper dive into Zebralution’s information will hopefully prove to be useful as well as inspire others to share their data more broadly.”

The white paper—part of the series of interpretations of market views normally offered by Frankfurt in the run-up to the annual trade show (October 14 to 18)—is this year sponsored by Zebralution.

The consultant Linda Lee has written the piece. She was for four years president of the voluntary board of the States-based Audio Publishers Association and now is a consultant. She has leaned heavily, and with good disclosure, on Zebralution’s appraisal of trends and issues. She has a very relevant background, having been until May of last year a general manager of Scholastic Audio, a 10-year stint that was part of 22 years with the Scholastic division Weston Woods Studios.

And while its insights are welcome and in line with audiobook trend lines we’ve covered here at Publishing Perspectives during the months of the coronavirus COVID-19 pandemic, the difficulty in aggregating truly comprehensive data on the digital book business is unavoidably in play here (no one’s fault), as it has been for so many years in the ebook trade. The major players—online production, retail, and distribution platforms—hold much of their sales and trends data as proprietary information and so it’s always good to bear in mind that what we can see, what is offered, is always partial and may or may not be skewing our perceptions of how one sector or another is doing. 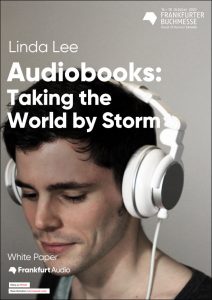 There’s a curious lack of input from the All About Audio program from Bookwire, which brought together a strong cohort of industry comments in June. (You can see more of this in our coverage here and here.) But one thing Lee does well is stress that as excited as many in the world publishing industry are about audiobooks—for years a happily dependable book business growth sector in many markets—they remain a rather slender element of most national format charts.

For example, in May, the largest downloaded audiobook market, that of the United States, comprised 8.9 percent of the American market’s overall picture of trade sales by format. This is charted in our coverage of the Association of American Publishers’ StatShot report here, if you’d like to review it. There was a considerable boost of 22 percent in audiobooks (and 39 percent for ebooks) as an effect of the pandemic’s buying patterns, but still, Lee is right to say very early on in her overview that audiobooks “are still a relatively small segment of the book publishing market when compared to print and ebooks.”

When Frankfurt organizers last year gathered audiobook interests—publishers and the many vendors and services that surround this format—into a “Frankfurt Audio” focal area in Hall 3.1, the response was, pardon the pun, loudly supportive. And so this year, the conferencing material being coordinated for the pandemic-era hybrid Frankfurt will feature a strong audio component, and this paper is produced in support of that focal area. 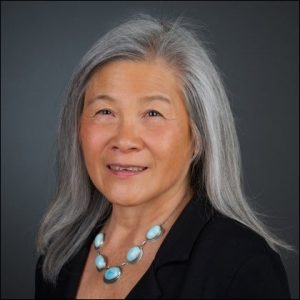 In looking at several of the observations here, some fundamental points are good to mark:

We’ll hit a few high points in charts for you. For those, Lee depends primarily on Zebralution numbers, and in her discussion, she looks to various published reports, including some of our work here at Publishing Perspectives.

Since we’ve touched on Lee’s background with the Audio Publishing Association, led by Michele Cobb and based in the States, here’s her chart on the five-year growth of audiobooks in the American market–the engine of the excitement, if you will. 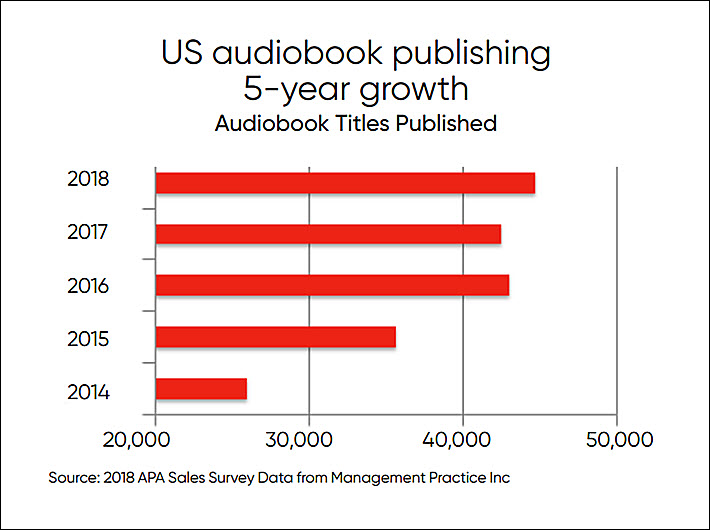 We’ll refer you to Page 5 for some anecdotal looks from Lee at “size of market” numbers in various parts of world publishing’s audiobook sector. While the full picture is never available, these can be at least indicative of a way to think of the prevalence of interest in audio.

The point to remember is that in most markets the very biggest players, such as Amazon’s Audible, may be the ones whose data isn’t factored into the mix because they don’t publicly share their numbers.

Where we find some of the most helpful research in audio trends is in consumer profiles—not least because, like ebooks, audiobooks have the chance to capture elements of a market that may not otherwise “be into books.”

Case in point, the family-years parenting age demographic of 25 to 34 and 35 to 44. These folks—maybe you’re one of them—are known to be superbly busy because they’re trying to push forward careers and capture Madison Avenue-driven ideals of a “good life” while raising children. During the pathogen’s assault, these have been among the hardest hit of all our essential workers, of course, making their heroism even more astonishing.

This chart looks at age demographics and audiobook usage in the top three Zebralution markets, Germany, the United Kingdom, and the United States. 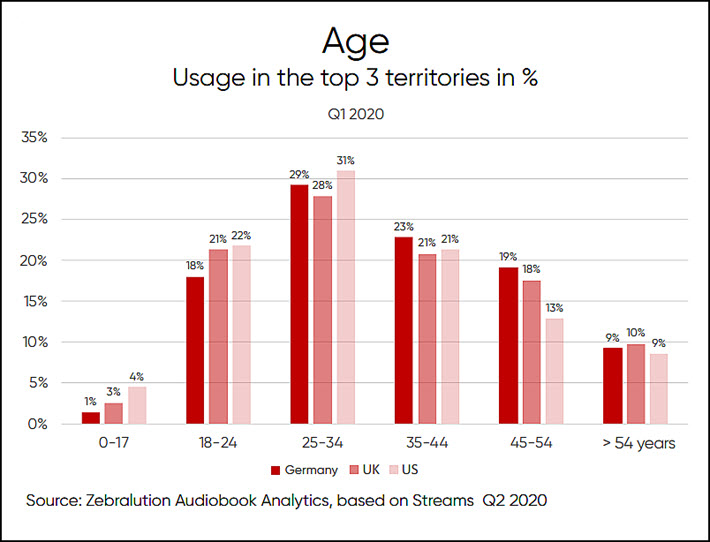 One of the factors about audiobooks that’s most heartening is that while men are rarely as big a pool of ready readers as women, there have been times—especially in the UK market—when male audiobook listening actually outstripped females’ listening patterns. And in Lee’s use of Zebralution numbers for this report, she sees male and female listeners neck-and-neck—rather than the usual readership pattern in which women substantively out-read men.

This is a hopeful trend for publishing. If a format can bring more male money to the book business’ table—and help keep us from living in a world of unread men—then the industry, the world, and both genders are better for it. This, too, is part of the worldwide debate about diversity and inclusivity in publishing, by the way, an element of it too often left out of our conversations. 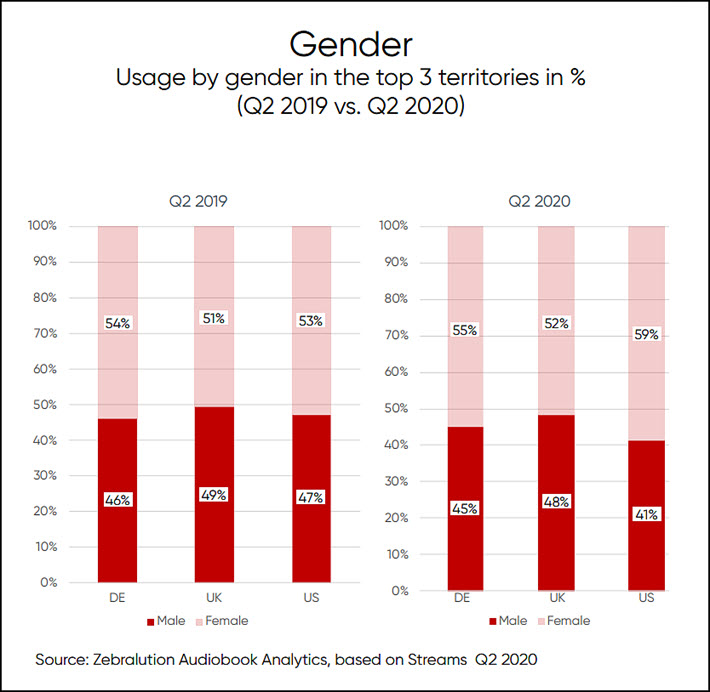 As you read this chart, note that what you’re seeing is female consumer percentages, meaning that to get the percentages at which males of a certain age may be listening to one genre or another, its’ the remainder of the percentage shown. 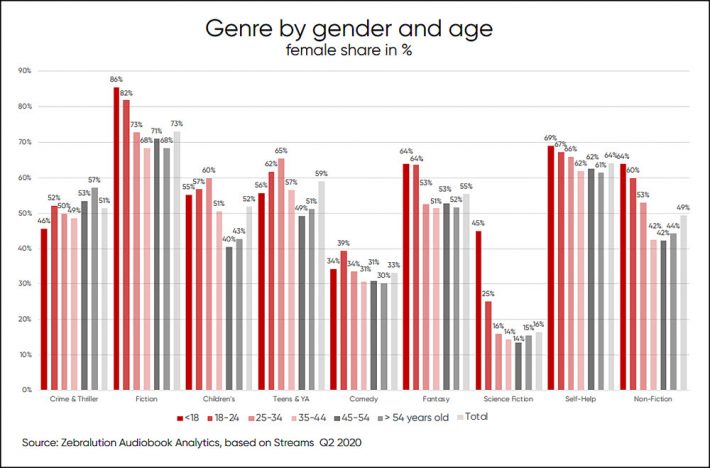 Digital’s Staying Power After the Pandemic

One of the points of most importance to the international book trade as the coronavirus pandemic’s impact wears on is that we can expect to see some more or less permanent “converts” to digital products as a result of print being made less attainable or safe to handle—in various markets and at different times and in shifting levels of lockdowns and other mitigation strategies.

And this, of course, is where the real potential for audiobooks as part of the trade portfolio has a chance to move into the broader promise it holds.

If digital publishing, inclusive of audio, can capitalize on new parts of its readership among those who have accessed its offerings during the pandemic, then it may start to widen its place in the readership’s affections and the industry’s profits as many have hoped it would.

To get a free copy of Frankfurt’s report from Lee, registration is required at this page.

Zebralution, based in Berlin, and was founded in 2004 by former Vodaphone executives. In December, GEMA, the German society for musical performing and mechanical reproduction rights, bought a majority stake in the operation. Zebralution works with music, audiobooks, and podcasts, and it has an office in Los Angeles as well as several hubs in Europe.

More from Publishing Perspectives on audiobooks and the audio market is here. More from us on Frankfurter Buchmesse is here. And more from us on the coronavirus COVID-19 pandemic and its impact on international book publishing is here and at the CORONAVIRUS tab at the top of each page of our site.