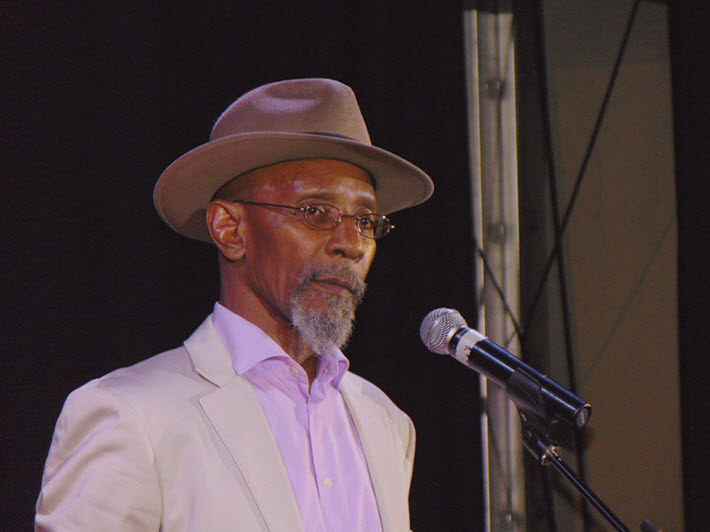 Recognizing his ‘colossal and multi-generational’ impact ‘on the cultural landscape over the last half-century,’ the Pinter Prize jury honors poet and reggae artist Linton Kwesi Johnson.

Linton Kwesi Johnson in a performance in London’s ‘Stand Up and Spit’ series of events in 2015. Image: Provided by English PEN, Speaking Volumes

‘Awarding the Prize to a Living Legend’

With the formal date of the digital award ceremony set for October 12, English PEN has announced today (July 7) that Jamaican-born Linton Kwesi Johnson, 67, has won the 2020 PEN Pinter Prize.

As Publishing Perspectives readers will recall, this is the award that allows its laureate to announce a co-winner during the ceremony as International Writer of Courage. PEN provides a shortlist from which the Johnson will draw his selection. Last year, for example, when Lemn Sissay won the Pinter Prize, he selected Ethiopia’s Befeqadu Hailu to be named his co-winner.

The Pinter Prize is an annual award that honors “a writer from Britain, the Republic of Ireland or the Commonwealth who, in the words of Harold Pinter’s Nobel speech, casts an ‘unflinching, unswerving’ gaze upon the world, and shows a ‘fierce intellectual determination … to define the real truth of our lives and our societies.'”

And Johnson is no stranger to PEN’s awards program. He was the recipient of the Golden PEN in 2013, and has said about this new honor, “Awards are the nourishment of every artist’s ego.

“Awards are the nourishment of every artist’s ego.”Linton Kwesi Johnson

In comments on the jury’s process and selection, Armitstead is quoted today, saying, “Once we had laid our nominations on the table, it took all of two seconds to agree that we had a clear and outstanding winner for the PEN Pinter Prize 2020.

“Linton Kwesi Johnson is a poet, reggae icon, academic, and campaigner, whose impact on the cultural landscape over the last half-century has been colossal and multi-generational. His political ferocity and his tireless scrutiny of history are truly Pinteresque, as is the humor with which he pursues them.”

Johnson studied sociology at the University of London’s Goldsmith College and first published poetry in a journal, Race Today. That journal in 1974 published his first collection, Voices of the Living and the Dead. In later years, his poetry would refer to racist police brutality and the regime in the UK of Margaret Thatcher.

One of his most prestigious publications is the 2006 Selected Poems volume from Penguin Random House. In association with that title, Penguin has included a video of Johnson reading work including the lyrics to “Tings an’ Times,’ written in 1991. The taping was made at the Mayor of London’s Windrush Celebrations.

An excerpt from that work:

During his appearance in the Windrush Celebrations, Johnson told the audience, “Poetry is like medicine, and should be taken only in small doses.”

‘He Has Been Fearless, and Relentless’

Johnson’s music is some of the best-selling reggae in the world, and he has toured internationally with it, having founded his own record label, LKJ. In a discography, his album titled Tings An’ Times appears in 1991. 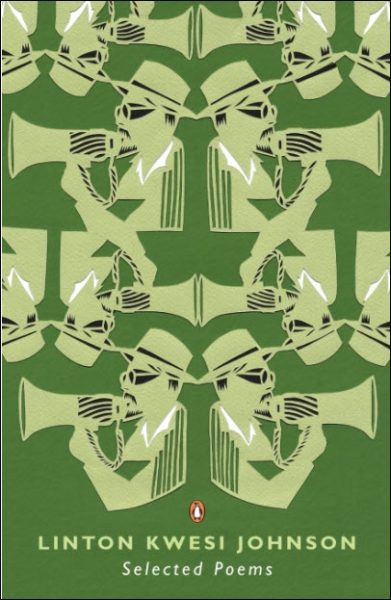 In her juror’s comment about the choice of Johnson, Lovegrove says, “I feel I came into the world with the sound of political and cultural activism from Linton Kwesi Johnson work ringing in my ears.

“His powerful words and energetic passion have guided me and many others to always interrogate and push forward against the status quo. It’s been a honor to judge the PEN Pinter Prize this year and an greater honor to be part of the collective awarding the prize to a living legend.”

And Max Porter is quoted, saying, “I can think of few people who more clearly embody the power of poetry to enact change. Few post-war figures have been as unwaveringly committed to political expression in their work.

“He has been fearless, and relentless, but tragically his message is now more important than ever, given the Windrush scandal and the ongoing systemic demonization of the immigrant population and racial minorities in the UK.”

Porter’s reference to the Windrush scandal recalls the 2018 revelation of UK governmental threats of deportation issued to the children of Commonwealth citizens who were told they were illegally in Britain. Many arrived from the Caribbean on a ship called MV Empire Windrush prior to 1971, the year that an immigration act gave Commonwealth citizens living in the UK the right to stay indefinitely. A Windrush Compensation Scheme was created in April 2019 with an expectation that some 15,000 claims may be made by the April 2023 deadline.

Past Winners of the Pinter Prize

More from Publishing Perspectives on English PEN is here, and more from us on publishing and book awards and honors is here.