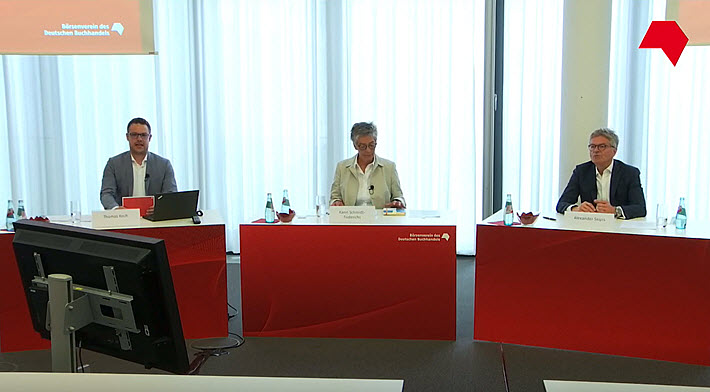 A new report on the German publishing industry focuses on effects of the COVID-19 pandemic in continental Europe’s largest book market.

Against a backdrop of concern for how fast an overall economic recovery Germany can make from the impact of the coronavirus COVID-19 pandemic, the Börsenverein des Deutschen Buchhandels—Germany’s publishers and booksellers association—is working valiantly in its communications with the news media to remind consumers that “books are firmly entrenched in our society.” The message: All will be well, hang on. 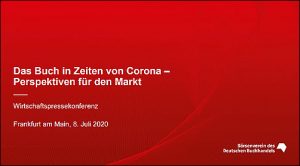 Germany “has withstood the pandemic better than other big European countries, recording fewer COVID-19 deaths,” writes Reuters’ Joseph Nasr, “and its economy has been relatively resilient during more than six weeks of lockdown owing to generous stimulus packages and a decision to keep open factories and construction sites. But data showing that industrial orders had risen by a record 10.4 percent during a month when restrictions were gradually lifted, almost a third less than forecast in a Reuters poll, dashed hopes of a quick return to pre-crisis business activity.”

The Börsenverein produces an annual market report each summer, as Publishing Perspectives readers will recall. In last year’s report, which appeared in June, the association was understandably pleased to see growth in Germany’s book market by some 300,000 buyers—the first such boost since 2012 in this nation of 83 million people.

Not surprisingly, what normally would be a straight-to-it report about 2019 cannot just be that this time, and the organization’s leadership is gamely stepping up to the plate to frame some observations with prudent caution—knowing that interest and concern relative to the virus’ impact will at least for now overshadow interest in more typical annual observations. And the over-arching point, of course, must be that several weeks of store closures have left bookstores with major sales losses.

Echoing what we’re hearing from so many of the international markets we cover, there are a couple of high-level themes that we’ll see playing out as long-term fallout—beyond the sheer struggle with lost revenue—begin to surface more clearly.

The Pandemic’s  Effects in the German Market 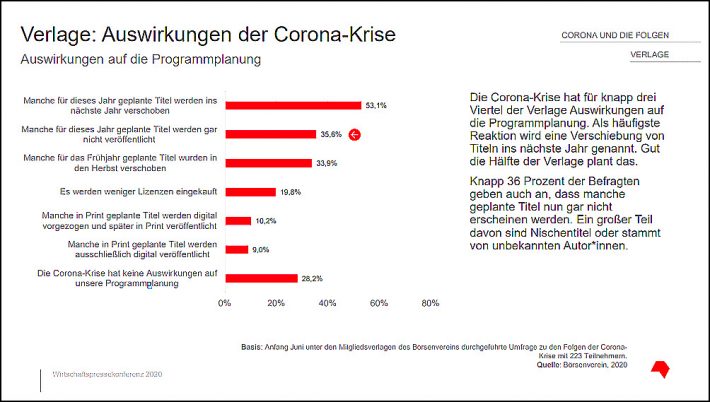 The new report is titled The Book in Time of Corona: Perspectives on the Market.

We’ll bullet out the Börsenverein’s specific points on the COVID-19 crisis’ impact, which are very helpful in getting a look at what the publishers of continental Europe’s leading book market are facing. This is the kind of overview that everyone engaged at the international level in publishing would appreciate from all our markets. 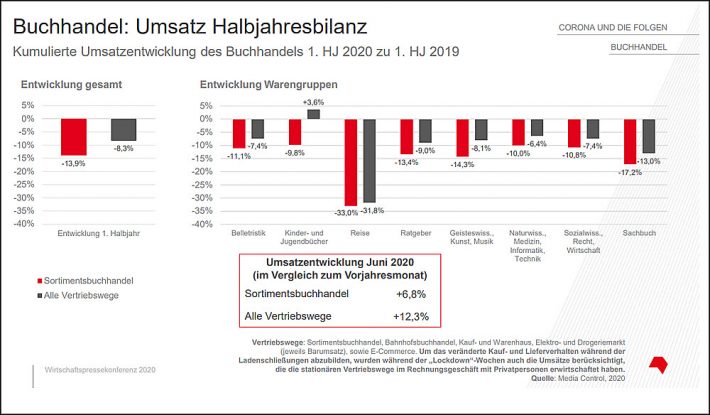 This chart looks at the first half of 2020, with bookstore sales in red and all sales channels in black. By June 30, German sales had recovered from an initial 14.9-percent downturn to being 8.3-percent down. Image: Börsenverein des Deutschen Buchhandels

In its service to the industry, of course, the Börsenverein is quick to couple this information with an outlook of good capability and perseverance, stressing the progress that publishers and booksellers see, “continuously reducing losses.”

That 14.9-percent downturn at the time of the stores’ reopening in mid-April had been narrowed, the staff says, to 8.3 percent by the end of June. And books in children’s and YA categories are seeing increases in sales, no doubt as families work their way through a difficult summer.

In comments provided to the news media from Wednesday’s release of the Börsenverein’s report, Karin Schmidt-Friderichs, the organization’s chair, says, “Although the coronavirus pandemic has hit the book industry hard economically, it has also released great energy. Staff in bookstores and publishing houses have effectively tackled the challenge, launching delivery services and online events with great creativity.

“The book trade also benefited from the fact that it has long been well positioned with its online shops. German bookstores and publishers are thus proving to be reliable partners for the supply of books.

“However, many publishers have been forced to postpone or cancel new publications altogether due to the lack of marketing opportunities—a large proportion of these being titles by unknown authors and also niche titles. This sends out an alarm signal as it endangers the literary and cultural diversity of our society.”

And Börsenverein managing director Alexander Skipis is quoted, mentioning with gratitude the kind of state support that many of his colleagues in other international markets are fighting very hard to get for their own industries.

Skipis says, “Publishers and bookstores make a significant contribution to the future of our society, as the crisis has shown, since it’s precisely during times like these that people appreciate books. On our way out of the crisis and in the period that follows, new questions will arise about the future of society. The book industry would like to give impetus to this through its content, provide information and encourage debate.

“The great demand for books for children and young adults in recent months makes it clear that in times of crisis, books also play an important role in this area. Books do not simply provide an activity, but also enable education and provide support and a sense of security.

“The federal government has recognized the book industry’s commitment during the crisis by providing extensive support in the form of effective emergency financial aid, the rapid re-opening of bookstores and a comprehensive cultural sponsorship program. We would particularly like to thank Monika Grütters, the state minister for culture, for her contribution and commitment.

“In order to continue making a contribution to society in the future, books need two things above all: visibility and a stronger framework of stable conditions. The discussion about books must become broader and louder; particularly in the media and especially in public broadcasting. In addition, we need strong copyright law and publishers must again be included in the distributions of the copyright collecting societies as soon as possible. We appeal to the Federal Government to finally make good on its promise and quickly introduce a legal regulation on this issue.”

Points on Germany’s Market in 2019 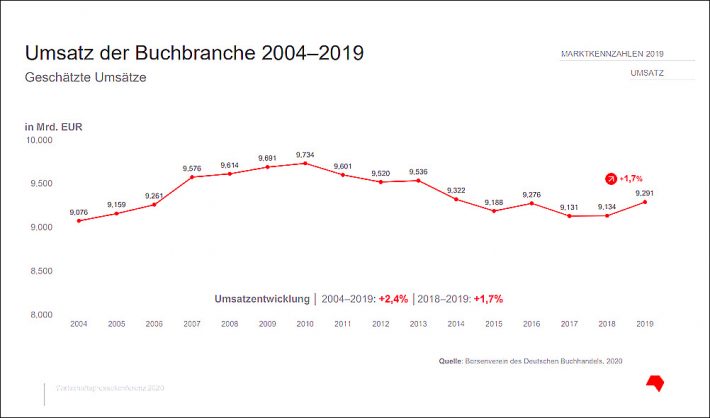 Taking a second seat to the crisis of the day, high points of the 2019 lookback from the Börsenverein are important to note quickly.

As it happens, the 2019 market followed the addition of 300,000 buyers to the market with a step backward. The number of people purchasing books on the public market, the report tells us, declined. Some 28.8 million people bought at least one book last year, the report says, which is 3.5 percent less than in 2018 (29.9 million).

The association does point out, however, that the people who did buy books bought more of them on average. “Purchasing intensity,” as it’s called, rose from an average 12 books per consumer in 2018 to 12.3 books in 2019, perhaps a hopeful sign.

With revenues of €4.29 billion (US$4.9 billion) and a 46.2-percent share of the total market, trade from physical bookstores remained the largest distribution channel for books. These stores increased their sales by 0.4 percent year-over-year.

Sales growth was stronger in the Internet book trade, which also includes the online business of the physical retailers. Through its online shops, the book trade generated sales of €1.86 billion (US$2.2 billion), 4.2 percent more than in 2018, corresponding to a market share of 20 percent.

Several further points of interest from the 2019 performance:

A Note on Terminology

For those who share with us–and many in book publishing do–the editor’s interest in terminology, you’ll see in graphics here a reference to the novel coronavirus as simply corona. In many parts of Europe, it’s common to refer to COVID-19 as corona, sometimes even capitalized as if it’s a proper name.

In fact, the word corona, in English dictionaries (our quoted bits are from Merriam-Webster), is derived from Latin and refers to a crown; to the glow around “a luminous body” (as the sun or moon); to “the projecting part of a classic cornice”; or to a “radial zone of minerals surrounding another mineral.”

The word is used by scientists to refer to viruses that under magnification display protruding elements reminiscent of decoration that might be seen on a royal crown. But the word corona, without virus, does not actually refer to a virus and not to COVID-19. The name for this specific virus comes from “coronavirus December 2019″ to designate the month in which it was formally detected.

Corona in popular reference to the virus, then, is a shorthand usage. The correct term for the pathogen in question is not corona but coronavirus.

More from Publishing Perspectives on the German book market is here. And more from us on the coronavirus COVID-19 pandemic and its impact on international book publishing is here and at the CORONAVIRUS tab at the top of each page of our site.