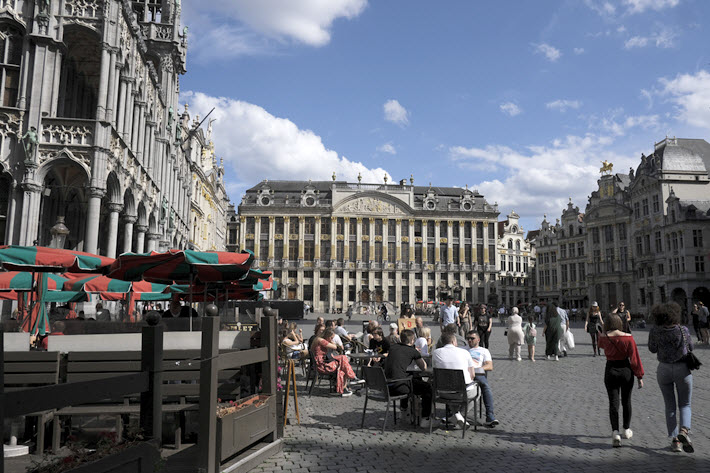 Partial outlines of the novel coronavirus’ impact take shape in the input gathered from many markets by the Federation of European Publishers for a newly released paper.

As Rudy Vanschoonbeek, the president of the Federation of European Publishers (FEP) puts it, “Then everything froze, first in Italy, then in Spain, and a few days later the whole of Europe, or almost, went into lockdown.” 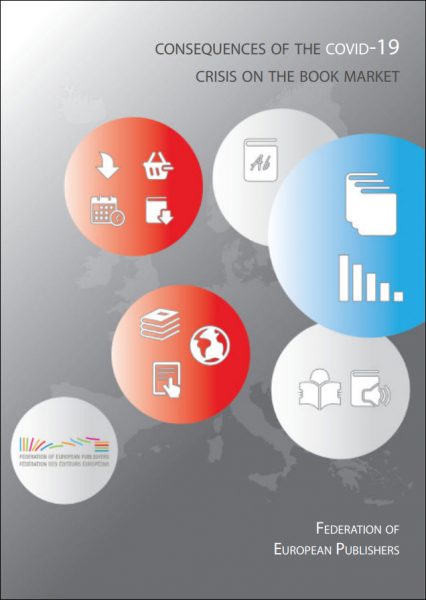 His introduction to a new report from the Brussels-based organization of publishers’ associations also explains, and rightly, that he and his colleagues know, “The crisis is not behind us, by far.” This is something that we, too, like all responsible and far-flung news media, continue to try to convey  to readers, listeners, viewers: Keep your mask on.

“This is an interim stocktaking exercise,” Vanschoonbeek says, “which we expect to renew at the end of the year. We hope that in the meanwhile trade will have picked up and that we will be bearers of better news.”

And the presentation, as a 15-page PDF, also bears the unavoidable marks of the confusion that has wracked each nation’s and the international community’s understanding of the coronavirus COVID19 pandemic and its effects. The material is anecdotal, market to market, an apple here, an orange there, all worth contemplating but not conducive to sound conclusions yet. Because comprehensively organized research isn’t yet available on the effects of this storm still blowing, it’s produced as a narrative rather than being parsed by data points.

This is not meant as a criticism of the federation’s effort—far from it—but as a reflection on how chaos continues to batter the world medical emergency of 2020: read the federation’s report as you’d peruse a well-curated gallery exhibition—for snapshots of a crisis-in-progress, not as an all-encompassing account.

Consequences of the COVID-19 Crisis on the Book Market is a part of the material that the federation has used in arguing for cultural subsidies at the European Union’s potentially pivotal Special Council recovery-measure meetings.

As the report from Brussels has arrived in journalists’ inboxes, the world has—strangely quietly—passed the 15-million mark in terms of universal known caseload. Jane Wardell and Gayle Issa at Reuters remind us in their report updated this morning (July 23), “After the first COVID-19 case was reported in Wuhan, China, in early January, it took about 15 weeks to reach 2 million cases. By contrast, it took just eight days to climb above 15 million from the 13 million reached on July 13.”

In Europe, the subject of the federation’s report, the total cases being certified by the Worldometer system, stand at 2.7 million. European fatalities to date: 199,749.

The magnitude of these numbers and our inability to be able to see their end, of course, doesn’t stop our trying to assess and make sense of what’s happening.

Only occasionally does this report wander into the unnecessary and unknowable. For example, one market’s association has contributed the notion that “33 percent of people worldwide read more books and/or listened to more audiobooks while at home during the crisis.” But no one has such “worldwide” data. Worldwide means everywhere. No single hard-hit market’s “research department,” as the credit reads, has been able to provide such a universal data point on reading. Not even caseload and death figures are believed to be showing us the actual depths of the nightmare. And this kind of hyperbole does the book business no favors. The publishing industry owes itself and its supporters strict truth as it best can be detected. The facts are bad enough. As we say, this kind of thing is happily rare in the document at hand.

In our look at the federation report, we’ll bullet out for you key points from the narrative, so in the same way the new report can’t be comprehensive, neither can be our account of it. All of these points are provided by the Federation of European Publishers in the report, they are not independently verified by Publishing Perspectives. We are still seeing this tragedy by candlelight.

Bookstores at the Center 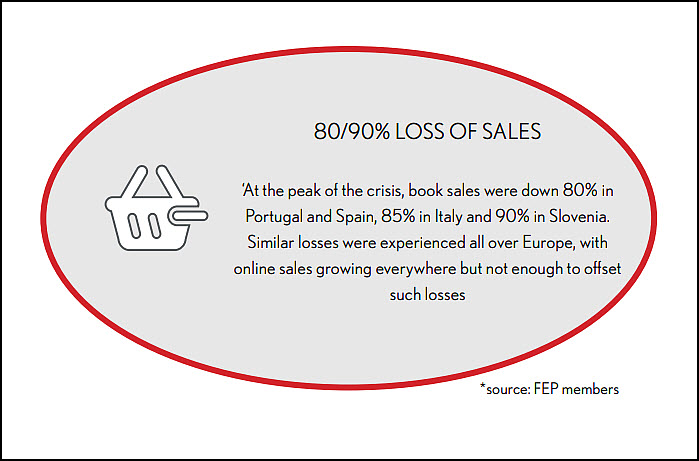 The federation report sees the pandemic’s sinkholes opening first and most persistently under bookstores. These retailers’ experiences outline the crisis most tangibly. A store with its “Closed By COVID-19” sign is a far more visible effect than a publisher’s move of a book’s release date from one point on the calendar to another.

“The impact on sales was immediate and dramatic,” the report reads. “Brick-and-mortar bookstores are everywhere the main channel for book sales, and the one most used by readers. In Italy, for example, they generate 66 percent of sales and are used by 74 percent of readers. The chilling effect on demand was unmistakable: sales in bookstores dropped anywhere between 75 percent and 95 percent in most countries where a lockdown was in place.”

Some metrics included in the report for March:

“Lockdowns were in place in most cases around mid-March, so figures for the whole month include two weeks of regular activity, although often already reduced.”

April, of course, saw the darkest days on the European timeline of the pathogen’s outbreaks. “When April came,” the report reads, “the book sector had virtually ground to a halt in many countries, and as lockdowns continued, the impact was felt at full force.” 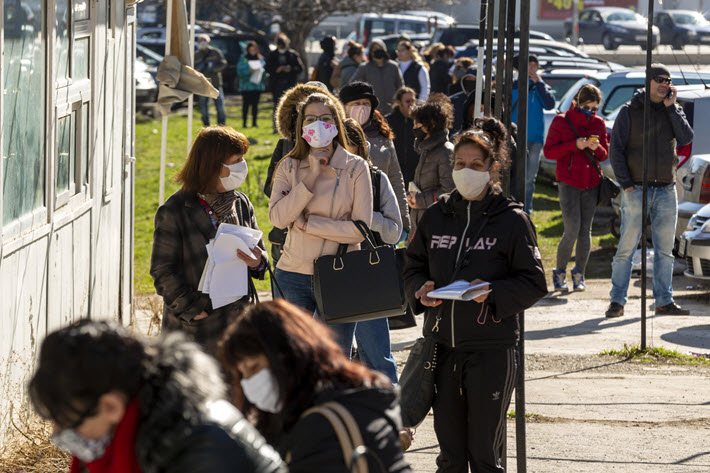 Some points on the effects in April:

Readers of the report will find it interesting to read of markets in which bookshops were not forced to close. “The health crisis still had an impact on the book market there, too,” we read, “as safety measures of some kind or other and the understandable reluctance of many people to go into shops took their toll on sales.”

Some views of the impact by May: 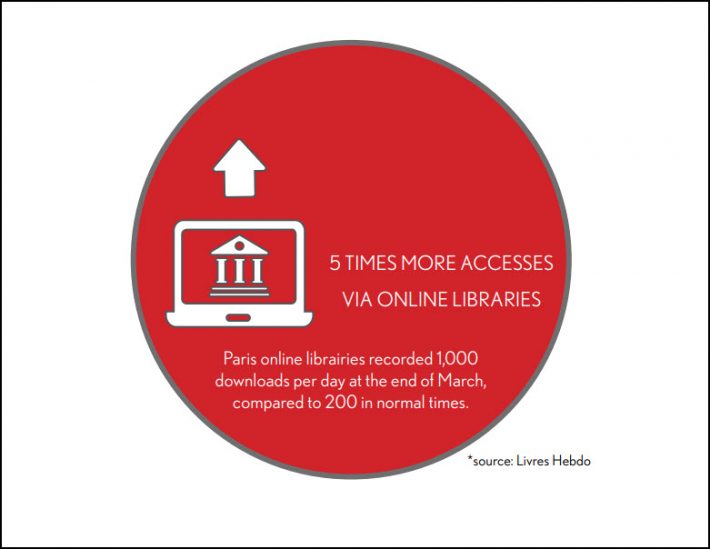 The document goes on to recount such features markets, “the lucky ones,” in which heavy value-chain damage seems to have been avoided. The Netherlands appears to have been fortunate in this regard.

There also are looks, as available, at early efforts to estimate eventual damage levels for the year; questions of how normally retail can be operated amid reopenings, how much shift may have occurred—and remain in effect—to digital formats and online retail points; what impact postponed and cancelled titles may have; the unknown effects to come of damaged economies and discretionary income; educational publishing’s role; and more.

“The only thing certain is that the book sector has suffered a serious blow from the COVID-19 pandemic, of which the precise dimensions are not yet clear,” the report’s authors write, and that’s correct, not least because—we’ll say it again—this thing is not over.

And it will be interesting to follow up with the federation at year’s end to see what sort of updated look at the European arena is being understood at that point.

Again, the PDF can be downloaded, free of charge, here. 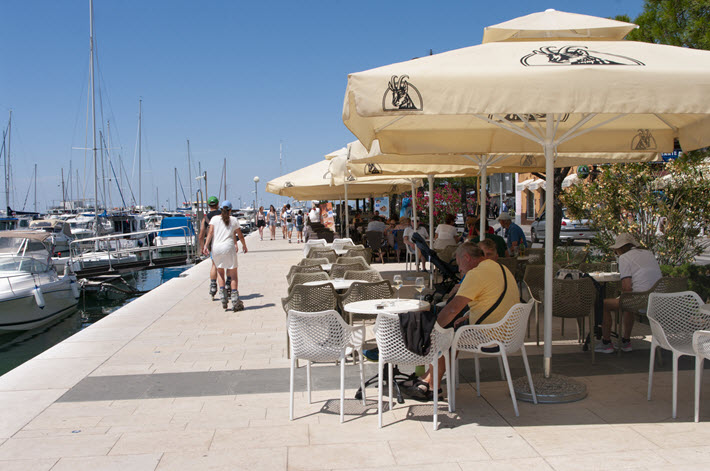 More from Publishing Perspectives on the Federation of European Publishers is here, more from us on Europe is here, and more on the coronavirus COVID-19 pandemic and its impact on international book publishing is here and at the CORONAVIRUS tab at the top of each page of our site.