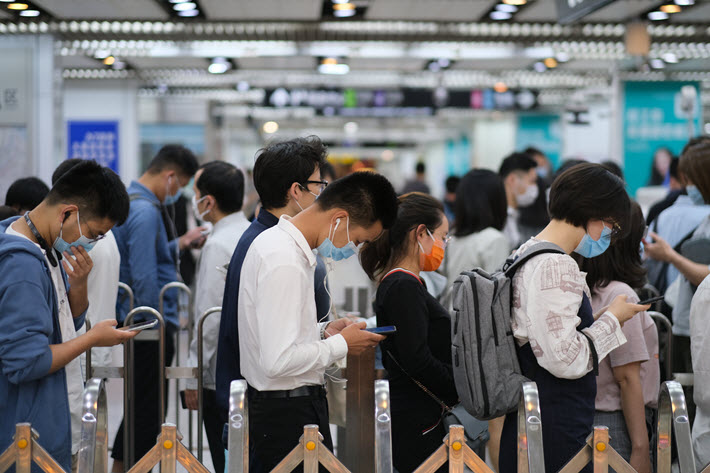 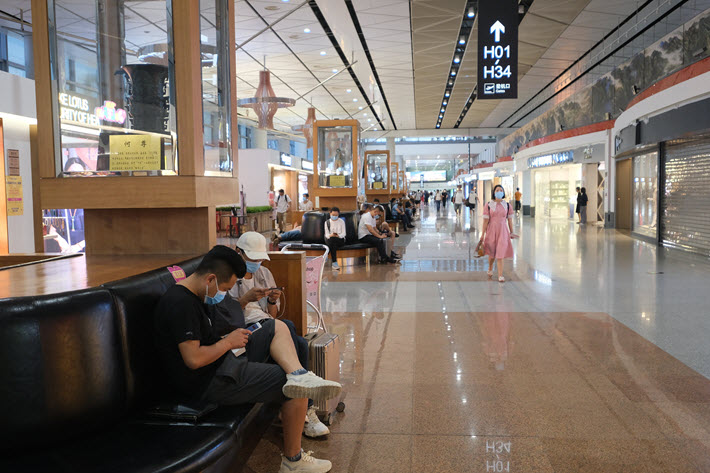 In a new report on the Chinese book market amid the ongoing coronavirus COVID-19 pandemic, Beijing OpenBook sees a 9.29-percent decline in performance year-over-year.

Digital retail is seen as increasing by 6.74 percent, while physical bookstores are down 47.36 percent as compared to the first half of 2019.

The main point of comparison our associates in Beijing are making today (July 17) is to their first-quarter report, which showed a January-to-March decline of nearly 16 percent over the same Q1 period of 2019.

What’s interesting to note is the relative continuation of pandemic trends in digital vs. physical bookselling. In Q1, when the pathogen’s first major outbreaks were wracking parts of the mainland, online retail in China gained by 3.02 percent and physical sales points for books had dived 54.8 percent.

Compare those figures to today’s report of a six-month gain for digital retail of 6.74 percent and of physical sales regaining some traction to the point of being down 47.36 percent over the same six-month period of 2019, and it’s tempting to think we’re seeing new momentum gathering in online retail and a comparatively slow recovery for bricks and mortar. This, however, may be deceptive.

China, like most nations, continues to struggle with the contagion’s progress.

Our OpenBook associates point to June, when the heavily protected capital itself was rocked by an outbreak—after a 55-day run without reported transmissions. Dennis Normile at Science Magazine on June 17 cited the state-owned Xinhua reporting 137 new cases. Heavily disruptive lockdowns were deployed and OpenBook confirms that even now the major physical bookstores are not fully reopened.

This morning, the BBC is reporting that flights from Urumqi, the capital of the Xinjiang region, abruptly have been cancelled because of an outbreak. And, as Sui-Lee Wee and Mariana Simões are writing for The New York Times, a Beijing-backed offer has been made to employees of the state-owned PetroChina to use one of two unproven purported vaccines. “They would effectively be guinea pigs,” write Wee and Simões, “for testing the unproven vaccines outside the official clinical trials.”

The situation continues to be volatile, in other words. At this writing, the 5:34 a.m. ET update (0934 GMT) of the Johns Hopkins Coronavirus Resource Center shows China ranked at 25th in the world for its COVID-19 caseload, with 85,314 infections and a death toll of 4,644 in a population of 1.4 billion. 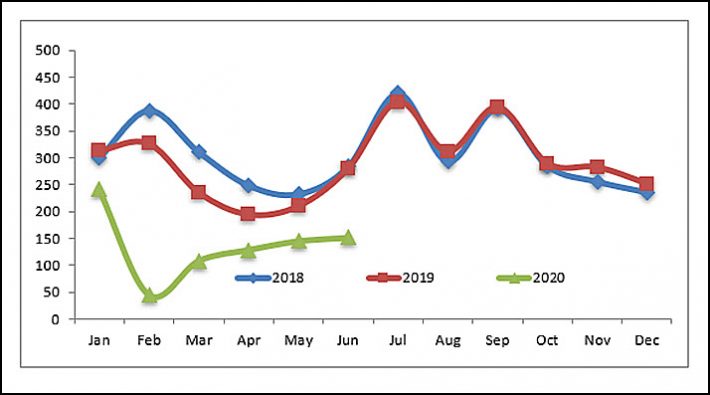 Tier 1 and Tier 2 cities in China are seeing the most impact on their bookstores, OpenBook’s research indicates. As you may know, the market uses a tier system to rank city size, though the ranking’s points are not reliably codified and are based on factors beyond population size, such as commercial viability. The Big Four cities of Tier 1, of course, are Beijing, Shanghai, Guangzhou and Shenzhen, and the second level generally includes Chengdu, Wuhan, Nanjing, Dalian, Zhengzhou, and others. 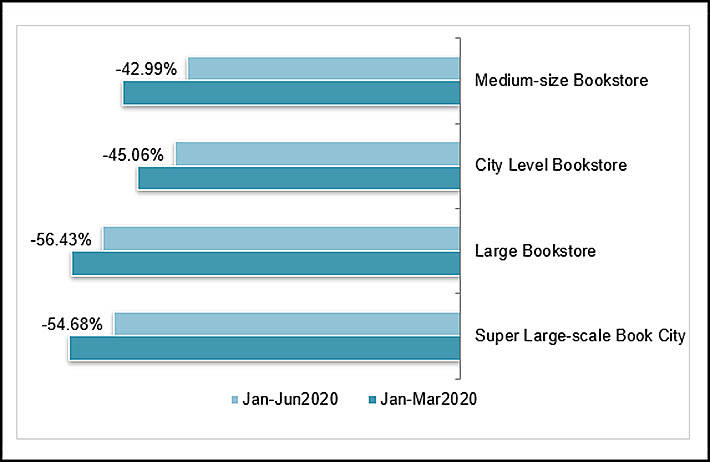 Year over year comparative performance of bookstores in China by size, January to June and January to March 2020. Image: Beijing OpenBook

Physical bookstores in these major hubs, especially the largest facilities, are “seriously affected,” our OpenBook associates say, in the Tier 1 super-cities seeing a decline of 55 percent over the first six months of 2019 and a downturn of at least 50 percent in Tier 2 hubs.

The research team assigns much of this to the state’s firm shutdown measures to control the virus’ spread in these centers, intensely valuable to the national economy. Bookstores in the north of the country are showing the biggest declines, year over year, in the first half of the year, by as much as 57.57 percent–thought to be related to the “second wave” outbreaks of the late spring. 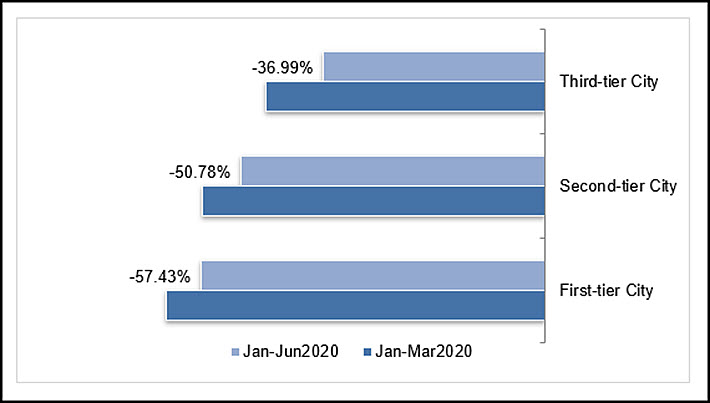 Year over year comparative physical bookstore performance by bookstores according to tiered city rankings in China, January to June and January to March 2020. Image: Beijing OpenBook

As we’ve mentioned, the online retail channels in China—after working through early disruptions in shipping logistics—have benefited from the pandemic conditions, rising to a 6.74-percent gain, year over year, in the first six months of 2020.

A part of this uptick includes the traditional June 18 mid-year promotions, which are always beneficial to the digital retail platforms. And OpenBook’s team sees an ongoing pall cast even on digital commerce by rolling events in testing, outbreaks, and mitigation strategies. 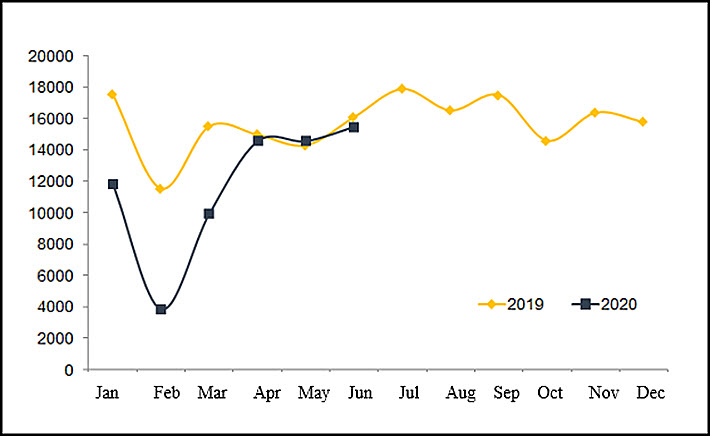 Monthly output of new titles from publishers in China, in 2019 and January to June 2020. Image: Beijing OpenBook

After a significant decline of new-title production in books—70 percent of publishers were reporting disruptions to their release schedules by March—more fresh content has come to market in April, May, and June. OpenBook sees the new-title release pace drawing up to a par with that of the same period in 2019.

In terms of effects on the bestseller charts of the Chinese market, we’ll look to have more information for you in our upcoming monthly China bestsellers report. 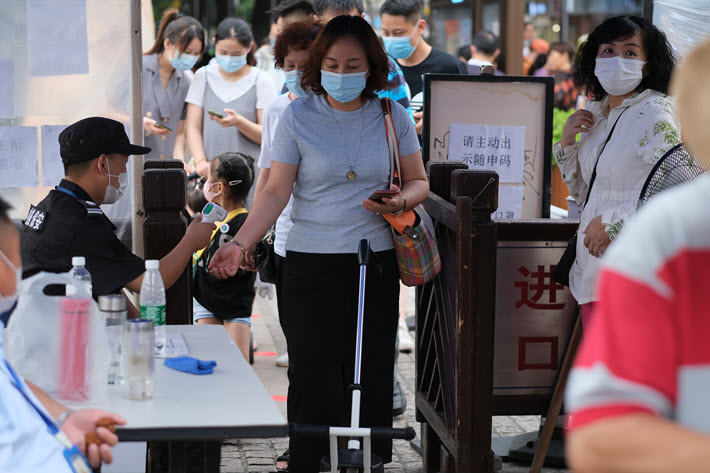 The China bestseller reports from Publishing Perspectives are here. And more of our world publishing statistical coverage is here.

OpenBook is a privately owned industry-data research firm based in Beijing. It functions somewhat as Nielsen and NDP do from the West, and Nielsen Book Research International has worked with OpenBook in Asian operations. With authoritative data and information resources, OpenBook is able to deliver consulting service to partners who would like to explore the Chinese book market and identify suitable partners.