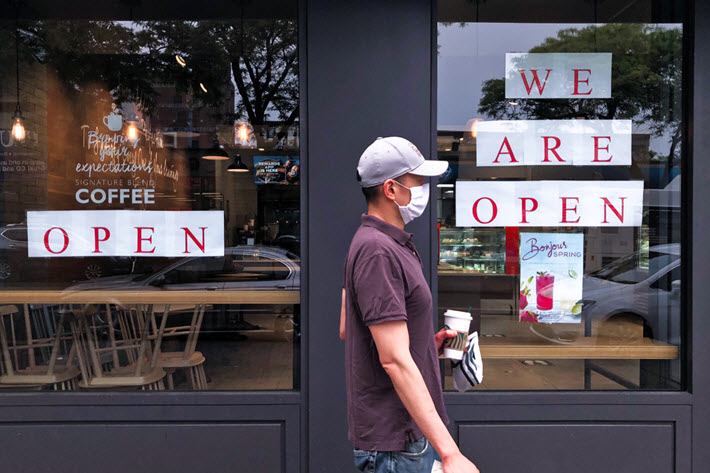 The May AAP StatShot report on the US book market shows a 12.1-percent drop in book sales year-over-year but also drop-offs in returns—which may not be good news.

A 45.2-Percent Drop-off in Returns

As many in the United States industry know, when bookstores were largely closed in mitigation efforts around the ongoing coronavirus COVID-19 pandemic, not only were normal levels of physical book orders not moving to stores but unsold books weren’t being returned, either.

And so what’s showing up in the May edition of the Association of American Publishers’ release today (July 13) of its StatShot report appears to be a deepening effect of bookstore orders falling off, but without returns creating as much drag as might be coming ahead. The picture, in other words, may be darker in reality than is showing up so far in the statistics, should returns really pick up during reopening.

Total trade sales were down 7.9 percent year-over-year, coming in at $635.8 million.

The new report comes, of course, as much of the United States is being engulfed in a broad surge in the pathogen’s presence, especially in the South and Midwest. At this writing, the 12:43 a.m. ET update (0443 GMT) of the Johns Hopkins Coronavirus Resource Center shows the States as the continuing world leader in the pandemic’s progress, with 3.4 million infections and 135,512 deaths in a population of 328 million.

Unless mitigation efforts succeed–particularly without a coordinated response at the national level–renewed lockdowns may soon include broadening swaths of the retail sector. In the past week, 35 of the 50 states have seen rises in caseloads.

The top-line point in a May-over-May comparison is that total net revenues across all categories for May 2020 were approximately US$1.0 billion, a decline of 12.1 percent as compared to May 2019.

You’ll also notice a big drop of 32.5 percent in K-12 instructional content, not surprisingly, with the school year by May deeply disrupted. 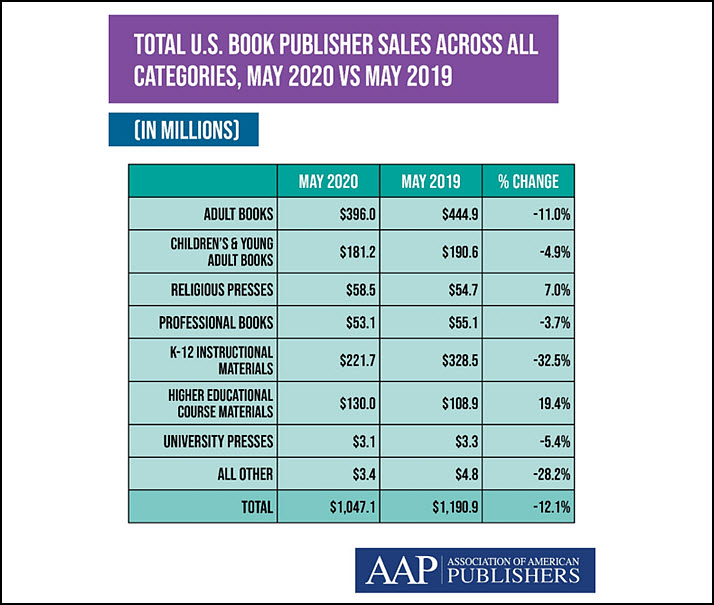 Year-to-date (January to May) sales were $4.3 billion, a decline of 4.5 percent as compared to the same period last year.

Again, however, lighter than usual returns are in play, with a total 24.8 percent drop in returns over the January-May period last year. 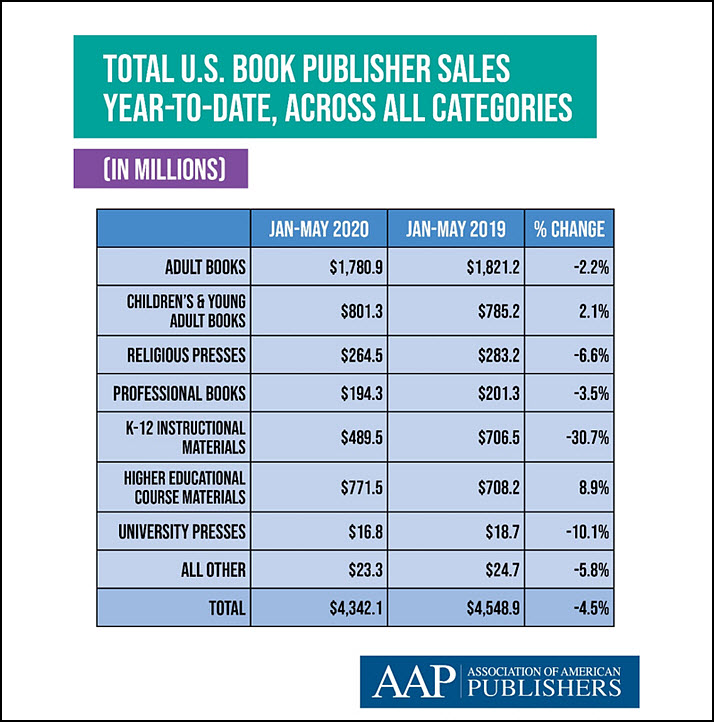 In our chart this time, we’ll add a column for the difference in returns by format to help parse where returns were so much lower than in the same month last year.

Notice that there were gratifying bumps in digital formats—downloaded audio and ebooks—as consumers accessed those formats while their movements were restricted and their favorite physical bookstores were closed. it doesn’t appear that enough sales went into such formats as to cover the downturns in print formats but the landing definitely was softened to some degree by digital.

In the graphic below, you’ll note the healthy 17.8-percent slice of the pie for ebooks as digital orders rose in lockdown scenarios.

It’s not as surprising as one might think that downloaded audio wasn’t greatly larger. This is because—as podcasters know—listening behaviors under lockdown changed, as people had fewer hours of commute time to devote to audio when under #StayAtHome orders and coping with work and children on the domestic scene. 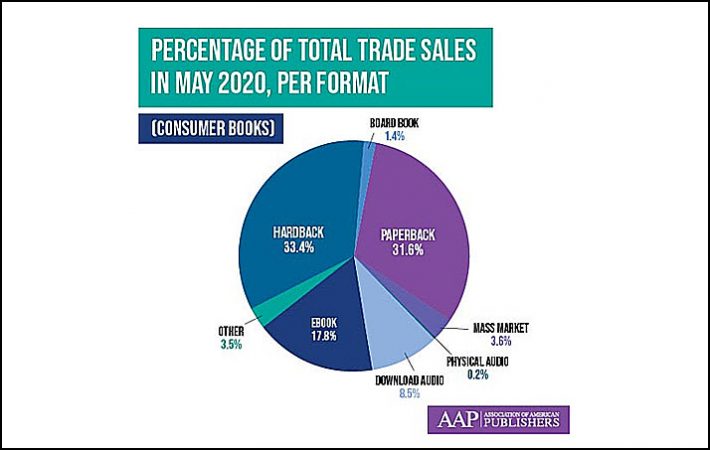 Religious press revenues were up 7.0 percent year-over-year in May, coming in at $58.5 million, but down 6.6 percent on a year-to-date basis, with revenues of $264.5 million for the first five months of the year.

Year-to-date revenues were down 9.9 percent, coming in at $1.5 billion. Revenues from higher education course materials were up 19.4 percent to $130.0 million for the month. On a year-to-date basis, higher education course materials revenues were up 8.9 percent, reaching $771.5 million—evidently, as students opted for the digital content they needed.

PreK-12 instructional content revenues were $221.7 million, a drop of 32.5 percent compared to May of last year, and year-to-date revenues in the category were $489.5 million, a decline of 30.7 percent as compared to the first five months of 2020.

Professional books, including business, medical, law, technical and scientific, declined 3.7 percent for the month, generating $53.1 million in revenue. The category saw a decline of 3.5 percent year-to-date, with $194.3 million in revenue during the first five months.

More from Publishing Perspectives on industry statistics is here. And more on the Association of American Publishers is here. More from us on the coronavirus COVID-19 pandemic and its impact on international book publishing is here and at the CORONAVIRUS tab at the top of each page of our site.